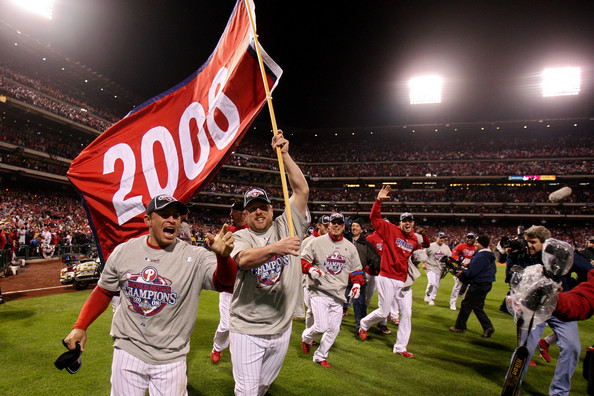 But, hey, this time we can revel in it.

Ahead of their trip to Philadelphia, where they’ve been twice since losing the World Series to a superior team, some Rays coaches and players were interviewed about their experiences in Philly during the 2008 World Series. Why? Well, there’s nothing else to talk about clearly.

“Anybody who talked about the city of Philadelphia at that time, nobody is exaggerating any of those thoughts and comments. Whatever the opposite of hospitable would be to you, that’s what the people of Philadelphia were to us at that time. It didn’t seem like the people of the city were happy that their team was in the World Series. It seemed like they were more happy and excited to take out their anger on the opposition and to degrade us. They were lined up on the street “gesturing” at us. Many, many gestures. They were banging on our bus. And, to say the least, I don’t think our family and friends who were at the games were able to enjoy it as much as they should have been able to.” -Rocco Baldelli

“It was a very passionate crowd for the Phillies. I’m trying to be politically correct. It was a tough crowd. They were on us from batting practice until the last out was made. There was a kid by the bullpen cursing at us and there was a cop there just laughing. There were a lot of colorful metaphors from the fans.” -Scott Cursi (who?)

“My ex-wife was there and she was appalled at the behavior of their fans, especially toward ours. At one point she went to get the security guard, who was actually an on-duty police officer, and he laughed at her and didn’t help at all. The fans lived up to their belligerent level. They revel in that type of thing. They wear it as a badge of honor, but it really ought to be a source of embarrassment to them.” – Jim Hickey

Hickey also noted how Game 5 should have been suspended long before it eventually was due to the rain and miserable playing conditions, conveniently forgetting that those conditions allowed Tampa to tie the game before it was eventually suspended. But, logic.

Dibs on the box of tissues so they can’t have any.