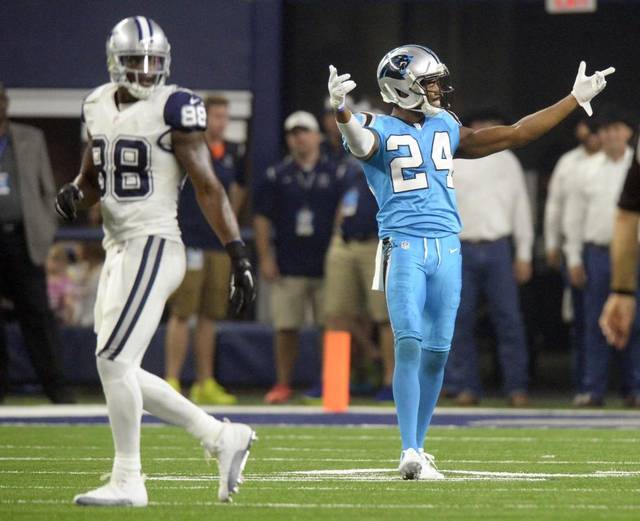 Yesterday, the Cowboys were favored to beat the Panthers. I understand the thinking behind it – Cowboys at home, Romo’s back, they are 3-0 with him starting, and the Panthers are due for a loss. Most don’t think the Panthers will finish the season undefeated, and I don’t really blame them for thinking that way. Any of us who have been watching the NFL for years knows that literally, any given Sunday, anything can happen.

So, was I shocked the Cowboys were favored to beat the Panthers yesterday? Not really. But, the Panthers sure were. And they made sure that everybody knew about it after the tarred and feathered the Cowboys in their own stadium while I enjoyed a delicious Thanksgiving meal.

First, Panthers cornerback, Josh Norman, called out Dez Bryant for being a lazy bastard. Because, well, he is:

Norman said several of the younger Carolina defensive backs came to the locker room during warm-ups and said Bryant called him out. He said Bryant “popped off” at him on the game’s second play after an incompletion to the Pro Bowl receiver down the left sideline.

“He shouldn’t have ticked off my DBs in pregame,” Norman said. “That took me to a whole other place. Once that happened, you can’t get me fired up [enough]. I’m telling you, I’m going to be at your throat for four quarters every time.”

Bryant caught only one pass for 6 yards when Norman was defending him. He caught only two passes for 28 yards on eight targets for the game.

He didn’t talk to reporters after the game.

“The disrespect was just through the roof,” Norman said.

I’m absolutely shocked that a three-win team could be so arrogant, along with their fan base. Tony Romo has been a good quarterback during his career, but he always has a knack for, how do I say this politely, f—ing shit up. I actually had Cowboy fans tell me they were Super Bowl contenders now with Romo back and the NFC East in tatters.

No, seriously. I did.

Norman wasn’t done about Dez, though.

“Hey, they need to get Dez’s 70 mil back,” he told reporters outside the locker room, according to The Dallas Morning News.

Norman said he was so fired up during the week with talk about Bryant possibly having a big day against him and the unbeaten Panthers (now 11-0) being an underdog that he had to go watch the movie “300” to get him to a dark place.

He had planned to save that movie for motivation later in the season.

“I had to get myself physically, mentally prepared to the point I didn’t want him to catch a single ball,” Norman said. “I was on him like white on rice. I didn’t care. And I was able to do it because of great teammates I have.”

The Panthers being underdogs going into this game obviously struck a cord with the team, and linebacker Thomas Davis called for a new America’s Team.

“To come into this game as underdogs, that’s a true sign of disrespect,” Panthers linebacker Thomas Davis said. “It showed that they didn’t really believe in us on the outside, but we continued to believe in each other.”

The Cowboys are one of the most popular teams in football, thus traditionally inflating their betting line. Panthers linebacker Shaq Thompson had an idea to change that.

“I think we need to change America’s team,” he said as he walked to the locker room.

Kurt Coleman, our old friend who joins the line of players that sucked as an Eagle but are playing great elsewhere, also got in on the fun.

“When you’re a 3-7 team,” Coleman said, noting Dallas’s record before Thursday, “you’re used to losing.” So, the safety continued, when the Panthers started to impose their will on Dallas, the Cowboys started falling apart.

Note: None of this makes me feel better about the Eagles. At all. But it’s nice knowing we’re not alone because there’s a team that’s even worse than the Eagles in the division. It truly is the holiday season.