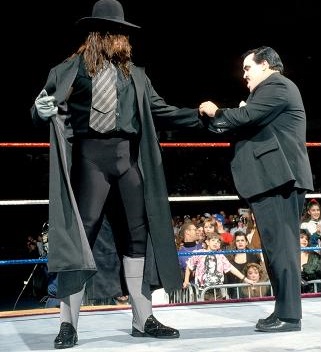 In case you weren’t aware, I’m the pro wrestling contributor for PhillyVoice.com, and write about WWE for the most part simply because of how global the company is and how it really set the bar way too high for professional wrestling worldwide. Regardless of what you or I think about the current programming, which does leave a lot to be desired often, the Survivor Series pay-per-view event tonight is a monumental one. Not only will a new WWE World Heavyweight Champion be crowned, but tonight will mark 25 years of The Undertaker in WWE.

The Undertaker is one of the most lauded characters ever in the history of wrestling. Not in anyone’s mind – even Vince McMahon’s – would have guessed how the career of The Phenom would  transpire over the course of the last two decades plus. His career is slowly coming to an end, and this is probably his final Survivor Series event, as he teams with his storyline brother, Kane, to take on two members of the Wyatt Family. [You can read my preview of the event here.]

So, with the career of The Phenom entering its swansong, let me take you on a little journey through the years of The Undertaker.

The Undertaker debuted in WWE, then the WWF, at the Survivor Series in 1990. He had come over from WCW after a stint as “Mean” Mark Callous and he also wrestled in World Class Championship Wrestling based out of Dallas. Not only did he make an immediate impact in his debut, but one year later, he was the WWF World Heavyweight Champion after defeating Hulk Hogan at the 1991 Survivor Series, with a little bit of assistance from Ric Flair.

Unfortunately, Taker wouldn’t hold the title for long, and less than a week later lost the title back to Hogan at This Tuesday in Texas. The title was eventually held up and won by Ric Flair at the 1992 Royal Rumble. By this point, Taker was getting a ton of cheers, so he was turned face and defeated Jake “The Snake” Roberts at WrestleMania VIII in Roberts’ last WWF match before heading to WCW.

The Undertaker would continue becoming more and more popular with the fanbase, but needed some time off in 1994. He was beaten and battered by nine superstars at the 1994 Royal Rumble during a Casket Match for the WWF Title against the reigning champion, Yokozuna. The champion would retain, and The Undertaker would “resurrect” after the match, only to return at SummerSlam later that year.

After taking a sabbatical, The Undertaker would return to the WWF for a main event match against… himself? The “Million Dollar Man” Ted DiBiase would start a storyline saying he was bringing Taker back since he was originally the one that introduced him four years prior. Paul Bearer would deny this, and the feud would culminate in a rather forgettable main event at 1994’s SummerSlam, where the real main event was Bret Hart defending his championship against his brother, Owen, in a steel cage.

For two more years, The Undertaker would continue to wrestle in rather unimportant circumstances, but he was still as popular as ever. When Mankins [Mick Foley] debuted the night after WrestleMania XII, the two would begin one of the most memorable feuds in not only Undertaker’s history, but WWF history. Mankind attacked Taker that night, leaving him laying on the outside of the ring. The two would meet eventually in a Boiler Room Brawl at SummerSlam 1996, and that’s when the unthinkable happened.

A few months later, The Undertaker and Mankind would participate in the first ever Buried Alive match at October’s In Your House pay-per-view, when, once again, a shitload of wrestlers had to come out and help Mankind bury The Undertaker, even though he technically won the match. The Executioner made his debut and hit Taker behind with a shovel, and those two along with other superstars would bury Taker alive.

After taking a few months away from wrestling, The Undertaker would return at Survivor Series that year, with new ring attire. He would finish up his feud with Mankind and at WrestleMania XIII, he would capture his second WWF Championship after defeating Sid in the main event. He would hold the title until losing it to Bret Hart at SummerSlam later that year. Over the course of the summer, after lighting Paul Bearer’s face literally on fire…

… Bearer would taunt The Undertaker with claims that the brother who he thought was deceased, Kane, was still alive after a fire burned their funeral home to the ground, in which his entire family was lost.

Kane would show up at Badd Blood in October 1997, during the first ever Hell in a Cell match.

This would probably go one to be one of, if not the best, feud The Undertaker ever had during his time in WWE.

The Undertaker would get a shot at the WWF Title against Shawn Michaels at the 1998 Royal Rumble in a Casket Match, and thought he and Kane were back on the same page as the weeks leading up to this, Kane helped his brother out. But it was only done to let Undertaker’s guard down, and then this happened:

About a month and a half later, he would return to accept Kane’s challenge for WrestleMania.

And so goes that feud, one for the record books. Later that year, The Undertaker did this to Mankind after their feud was rekindled:

In January 1999, he would turn heel and become a Satan-like character, sacrificing superstars who would then join him in his Ministry of Darkness.

And he would try to sacrifice Stone Cold Steve Austin on more than one occasion.

And tried to force Stephanie McMahon to marry him…

The Undertaker would win the WWF Title from Austin on the same pay-per-view event that Owen Hart fell to his death in May 1999, but he would lose it later that year. The Ministry would eventually dissolve and Taker would take a few months off before returning as… a biker.

I never really got into this character. It didn’t do anything for me, and Taker wasn’t really involved in any great feuds or matches at this point. Two highlights of this era Undertaker would be the fact that he killed Maven after he was eliminated from the 2002 Royal Rumble and the Hell in a Cell match against Brock Lesnar later that October.

He did defeat Hulk Hogan for the Undisputed Championship in 2002 before losing it that summer, but Big Evil wasn’t as popular with the crowds as his previous character was, and finally the company took notice.

In March 2004, months after Kane buried him alive in a match against Vince McMahon, The Dead Man returned.

Return of the Dead Man

Tonight marks 25 years of The Dead Man. Earlier this week, he tombstones a turkey on The Tonight Show.

Tonight, he may tombstone another turkey. No doubt, The Undertaker lives in my Top 5 Wrestlers of All-Time. It was a real toss-up between him and Shawn Michaels, but I gave the edge to the Dead Man.

What are your Top 5 Wrestlers of All-Time? Does The Phenom crack your list? Let us know in the comments and on social media.