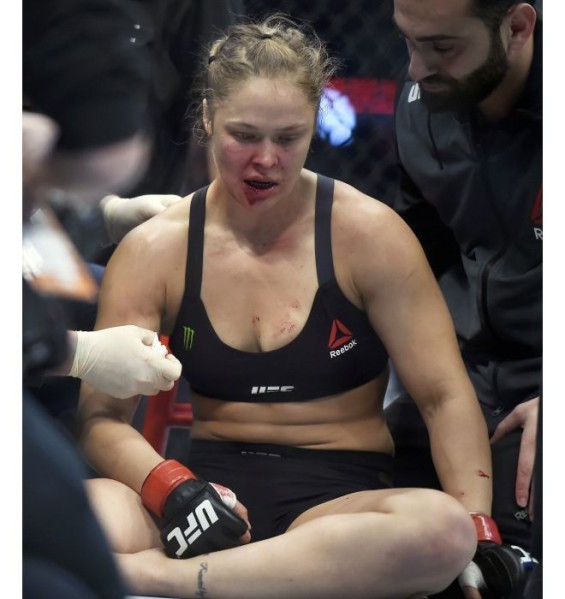 We posted some highlights of Ronda Rousey getting destroyed by Holly Holm this past weekend [which I’m still trying to get over], along with some conspiracy theory as to why Rousey could have lost so easily, especially after she admitted she was going on hiatus after the fight.

Jose Aldo, the current UFC Featherweight Champion, and probably one of the best pound-for-pound fighters in the world, thinks this was Rousey’s swansong in UFC, and said he thinks Rousey is done with MMA and will focus on doing movies, something she’s hinted in the past she wants to accomplish after her career in the octagon is over.

I think it’s really hard for her to return to fighting … Her career has taken a different direction. If I’m making a lot of money doing movies or something else, I’d go that direction too. Am I going to mess my face up getting punched in the face? You’re crazy [laughs]. In my opinion, I don’t think (she fights again). If she comes back, of course she can (win the title). She was always a fighter, but if I were her, I wouldn’t come back.

I see this as Gina’s [Carano] situation … Gina was a great fighter and went her way to become an actress after she lost to Cyborg, and she’s getting more attention than if she was still fighting. No diet, not getting punched in the face, nothing.”

Does Aldo know something we don’t know? It was kind of weird how Rousey said she was going to disappear for a bit after the fight, and come back possibly in the summer. Rousey has also hinted to wanting to be involved in WWE at some point, especially after she made an appearance during this past year’s WrestleMania. Though she’s said she won’t be able to be involved in the upcoming WrestleMania 32 from AT&T Stadium due to filming her next movie, I wouldn’t rule out anything right now in regards to her.

Video of the interview below.

via The Big Lead