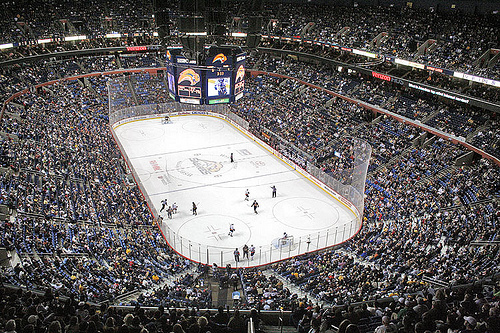 In today’s Morning Brew, we mentioned an NHL player who’s now being investigated for a “sex offense.”

Per a report from The Buffalo News, the Sabres’ Evander Kane is currently under investigation for what is only termed as a “sex offense.” The investigation by Buffalo police is for an incident that allegedly occurred Sunday morning in a downtown hotel room, near the Sabres’ arena.

Kane did not attend Buffalo’s practice Sunday morning, which the team said was for personal reasons. A Buffalo police source stated the following:

We have an investigation ongoing. We are not naming the suspect, and we do not expect it to be resolved in the very near future.”

The report states that “Kane has not been charged with any crime, and law enforcement officials would confirm only that there is an ongoing investigation by officers from the department’s Sex Offense Squad.” Another source in law enforcement said that the woman was having “memory issues.”

The Sabres released the following statement:

We take the allegation made today against Evander Kane very seriously. We are gathering facts and have been in touch with the NHL and Evander’s representatives. Until we have more information we will not have any additional comment.”

I’m sure that we’ll be hearing much more about this story in the near future, but one interesting note here is that the person that is reportedly representing Kane, Paul J. Cambria, also represented Patrick Kane. Patrick Kane if you recall was being investigated for an alleged rape of a 21-year old in his New York home. Patrick Kane was not charged when all was said and done.