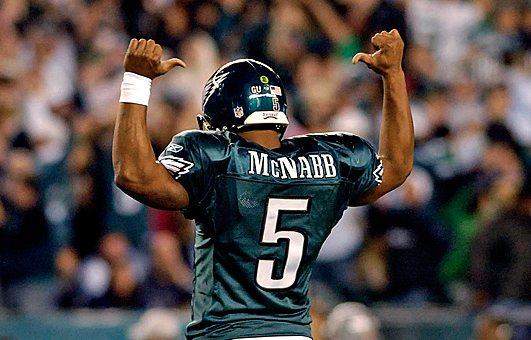 Whenever race is an issue in the sports world, everybody looks to ESPN’s Bomani Jones for his take on things. That’s why Jones will often joke and use the hashtag #AAN (Ask A Negro) because he knows why they’re calling him. Today, Jones was a guest on the Dan Patrick Show and had a very interesting point about why Cam Newton is different than any other black quarterback that has made a Super Bowl appearance and that includes former Eagles quarterback, Donovan McNabb.

The funny thing is that Jones is 100 percent right about McNabb. I always tell the story about the one time I had the chance to hangout with McNabb. Unlike what was seen of him on television, he was cool as hell in person. If #5 carried himself with that same confidence the whole time that he was the Eagles QB, as he did with me, everybody would’ve loved him. Also, to McNabb’s credit, he never got into any trouble (while playing). Not to mention, he was a pretty damn good quarterback. It’s just a testament to how television cameras can change people.