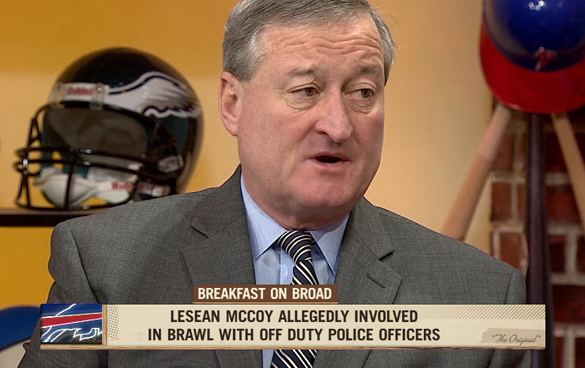 A common response when speaking about the LeSean McCoy incident is how a lot of people felt newly elected Mayor Jim Kenney was out of line when he said, “If [McCoy] wants to stomp our officers and pound our officers, then he needs to pay the price and answer for his actions.”

Me personally, I never had a problem with it because the video shows McCoy doing exactly that. Obviously, there’s a huge difference with what I say and what Mayor Jim Kenney says. Even Baltimore Ravens receiver, Steve Smith Sr., voiced his displeasure with Kenney’s words, tweeting “I hope he has Same enthusiasm if another cop kills one more of our unarmed youth. Just saying.”

In what is a great get by the producers over at Breakfast on Broad, Mayor Jim Kenney sits down with Jillian Mele and gives his side on why exactly he did say those words. Above is a snippet of the interview, the full interview will air Friday morning on The Comcast Network.

We’ll update this post with the full interview when it’s made available.