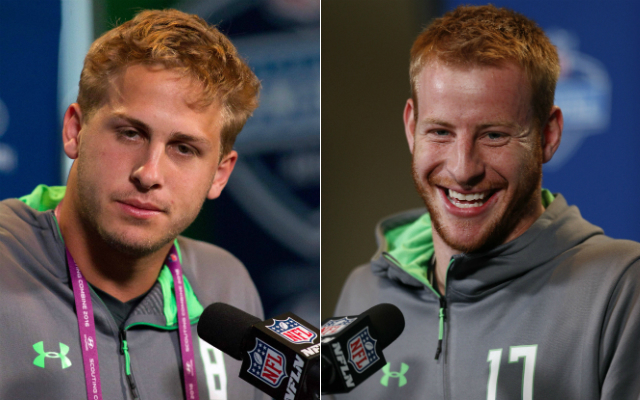 Just hours after the Los Angeles Rams traded up for the No. 1 overall pick, rumors of the Philadelphia Eagles moving up to No. 2 have surfaced.

If the #Browns see the #Rams take the QB they want, don't rule out a trade with the #Eagles for No. 2. Philly was in discussions for No. 1.

ESPN insider Adam Schefter appeared on 97.5 The Fanatic Wednesday and said he isn’t convinced that the Cleveland Browns are going to draft a quarterback with the No. 2 pick.

There is more & more smoke around Cleveland being willing to deal 2nd pick and draft QB in 2nd round. Something big will happen inside top 5

I’ve seen conflicting reports about who the Rams are going to take at No. 1.

Multiple sources : Goff is now THE guy among teams wanting QB. Rams knew/heard that. Had to move up

To reiterate — Rams are leaning toward Carson Wentz but Jared Goff still heavily in the mix. Will turn over every stone. Definitely a QB.

If the Rams were to select California’s Jared Goff at No. 1, I could obviously see the Birds trying to make a move up to the second slot because it’s been reported that Eagles head coach Doug Pederson “loves” Carson Wentz. Then again, maybe Philadelphia would be fine with either quarterback or it could all be an elaborate smokescreen.

Philadelphia’s eighth selection is worth 1,400 points and according to the trade chart it would take next year’s first and a later round pick to get there, but the market has been set with the heavy price the Rams just paid to get all the way up to the top spot.

ESPN’s Ed Werder reported that Titans general manager Jon Robinson said he had multiple offers for the No. 1 pick and the Eagles were one of them, while Howard Balzer reported that the Rams compiled the package they did because Tennessee was ready to pull the trigger on a deal with Philadelphia.

#Titans GM Jon Robinson says he had multiple offers for No. 1 overall pick. #Eagles one of them until withdrew earlier in week, per source

Sources says Rams gave package they did because of belief Titans were ready to pull the trigger on a deal with the Eagles.