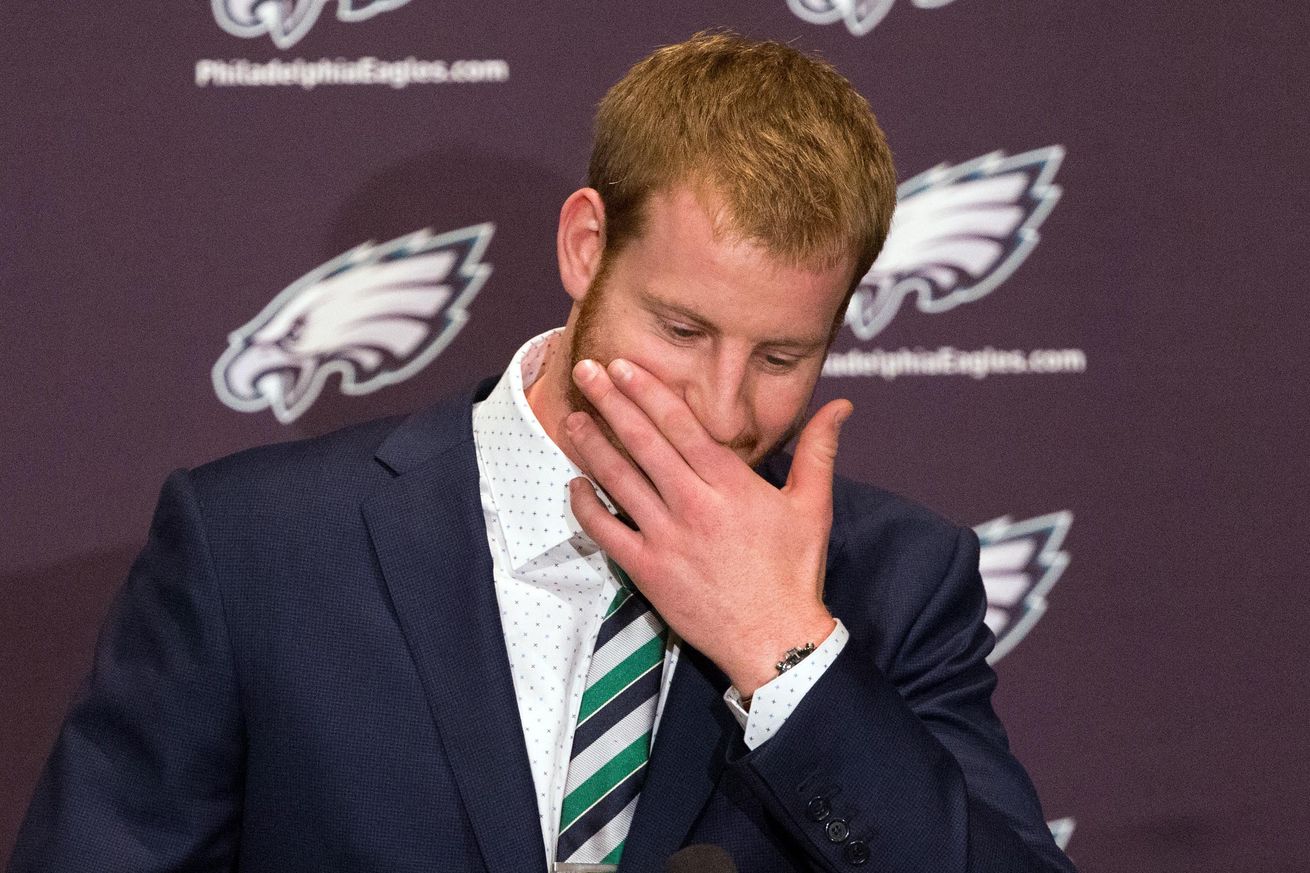 The assumption is that Carson Wentz won’t start a game in 2016. There’s just no way the North Dakota State FCS product can adjust this quickly to the speed of the NFL game, right?

What if he’s more pro-ready than we think?

Sure, barring a trade or injury, Sam Bradford is going to be the starting quarterback in Week 1 against the Cleveland Browns. Philadelphia Eagles vice president of football operations, Howie Roseman, has stayed firm on that stance since trading up to the No. 2 overall pick two weeks ago. It was one of the first things he said during his press conference following the trade.

“Sam Bradford is our starting quarterback,” he said.

If Bradford goes down at any point during the year and the Eagles are in contention, Chase Daniel will most likely get the next crack to start and not Wentz. Daniel has the experience and knows the playbook because he played for Doug Pederson while he was the offensive coordinator for the Kansas City Chiefs.

Wentz commented on having to sit on the bench and learn while he waits his turn during his first press conference in Philadelphia Friday.

But what if Bradford and the Eagles struggle? What if they’re out of the playoff race early?

Once Philadelphia is out of contention, the fans are going to be clamoring for the kid. It’ll be only a matter of time before Pederson trots Wentz out.

Wentz is used to waiting his turn. He was on the bench his first two years with the Bison while Brock Jensen was getting done winning the Bison the first three of their five consecutive FCS National Championships. It’s why he has just 23 starts and 612 pass attempts at the FCS level.

So he started for two years at the FCS level, but Wentz explained why he thinks he’ll be ready to go faster than people think.

“I think the transition for me will be a lot smoother than most would think, than most other prospects. I think at North Dakota State, I was in charge of a lot of things at the line of scrimmage, a lot of play-action pass, was in charge of the audibles, run game checks you name it,” he said.

He makes a very good point. The other point I’d like to make is his experience of taking snaps from under center. California’s Jared Goff, who is considered a lot more pro-ready than Wentz is, was in a shotgun spread offense where he didn’t take a lot of snaps under center. Neither did Memphis’ Paxton Lynch, who was in a similar type of attack.

Wentz doesn’t have to learn how to take drops from under center. Not only has he already learned it, you could tell at the NFL Scouting Combine how advanced his feet were compared to the other quarterbacks. His were a lot more balanced, light and smooth than the rest.

Getting back to the speed of the game thing. How big of a deal is it? Joe Flacco went to an FCS school. He was a first round pick for the Baltimore Ravens in 2008 and went on start all 16 games and helped lead them to an AFC Championship Game appearance. Of course, the Ravens brought him along slowly and he tossed just 14 touchdowns compared to 12 interceptions, but we’re talking about a rookie FCS quarterback starting all 16 games for a Super Bowl contender.

The other most recent FCS first-round quarterback was Steve McNair, who started just six games over his first two years before becoming the full-time starter in 1997. But McNair didn’t sit out his entire 1995 rookie season, he did start a pair of games.

So how will Wentz be handled compared to Flacco and McNair?

The Ravens were in a different situation in 2008 than the Eagles are now because Baltimore’s other quarterback was Troy Smith, who never proved to be anything in the NFL. Bradford, meanwhile, does have a pedigree although a lackluster one for being a No. 1 overall pick. McNair didn’t start because the 1990s was not only an era which didn’t see rookie quarterbacks starting, but the Houston Oilers did have an established veteran quarterback on their roster by the name of Chris Chandler.

How many games Wentz starts is all obviously going to be contingent on how the Eagles fare. If they’re in playoff contention all year long, Wentz won’t see a snap, but once they’re out of the picture Wentz should get some playing time.

If Philly is 2-6 midway through the year, let the kid play.

Whenever the Eagles are officially out of playoff contention, let the kid play.