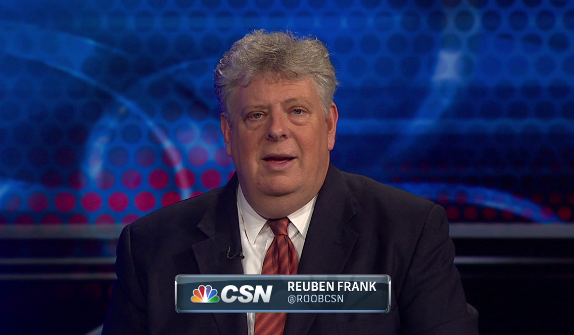 Reuben Frank is a seemingly good dude. I’ve never met him, but I’ve interacted with him on several occasions and he seems to be genuine about all of his thoughts and opinions. He’s not just someone who will throw shit at a wall to see if it sticks.

He also has the same personality on the airwaves at 94WIP, so I’m more apt to listen to his opinions on the Eagles and take something from it than national writers, and some local ones. [Although, I do feel like Philly has the best slew of Eagles reporters that they’ve ever had.]

On last night’s edition of Quick Slants on CSN Philly, Frank said he thinks Bradford will retire. He doesn’t think the Eagles can find a trade partner, and that might hamstring Bradford into retiring if he doesn’t come back during the mandatory mini camps with the desire to start for this team.

Here’s the transcript if you can’t view the video:

Derrick Gunn: Yup, with the $22 million the Eagles are giving him.

Frank: You know, whatever. Easy come, easy go. I think he’s gonna retire. I think he’s had enough. I don’t think he wants to be here. Honestly, I don’t think anybody else wants him. Maybe you get a 3 or 4, but I doubt it. I think it’s done. I think it’s over with. I think Chase Daniel starts your season, plays five or six games, whatever Doug Pederson played,  I think it’s seven. And then Carson Wentz comes in and he’s your quarterback for the next 10 years. And this time next year, we’re sitting here saying, “Sam who?”

I’ve heard rumblings elsewhere about this, but I don’t think it’s going to happen. If Bradford wants to be “the man” somewhere, he’s going to have to play for the Eagles this season unless a team really overpays for him and the Eagles can’t say no to a trade. I just don’t see him walking away from the game altogether.