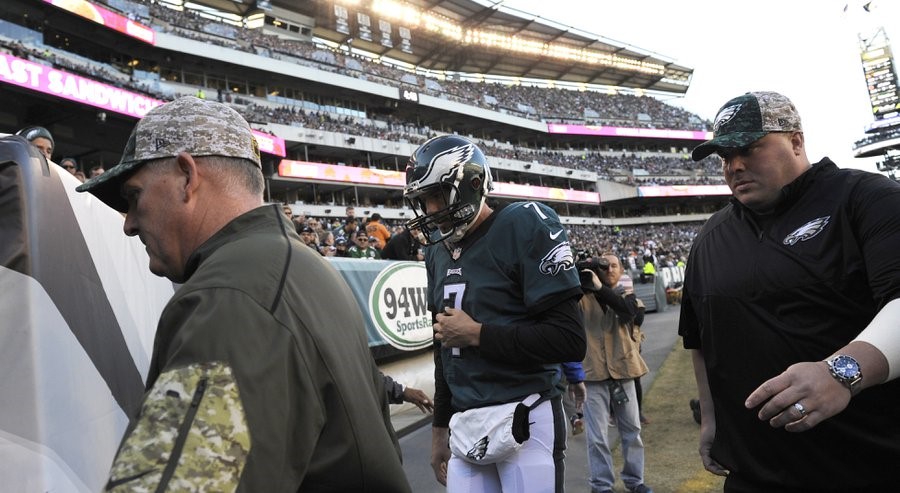 I said my recommendation is this: You don’t attend. You tell them you want to get traded. Which indicates to other teams in the league that you’re potentially available or that Philadelphia may at least want to talk about it. And, clearly, there is the Denver Broncos, a Super Bowl team who have lost both of their former starting quarterbacks. So you have to anticipate they were gonna be in the market, and they were. And so they came to Philadelphia to try to get a quarterback, and they didn’t get him. So they got him in the draft.

You can listen to some of the interview below.

But, wait. Just yesterday, Sal Paolantonio joined Mike Missanelli on 97.5 The Fanatic and said Condon wanted Bradford to go back to the Eagles the “Sunday night of draft week.” Later that day, he was on The Ron Jaworski Show on the same station, and said that Bradford was the catalyst for that entire situation, and Condon went into desperation mode to take the blame. Here’s Matt Lombardo with some of the quotes:

When the trade [for No. 2] was made, Doug Pedeson, Howie Roseman, and Jeffrey Lurie had a meeting with Sam Bradford. This is way before Sam had any sort of conversation with Tom Condon. In that meeting, he did not like the idea that the Eagles had traded up to No. 2 and expressed his displeasure, rather emphatically. He walked out of the meeting and told them he was leaving and he wanted to be traded and was leaving to go home to Oklahoma.

“He left the campus at NovaCare rather abruptly, went back to Oklahoma and perhaps on the phone in the car on the way to the airport, he called Tom Condon and told him what he was going to do and Condon was sort of stuck trying to figure out what to do with Sam Bradford.”

“He wanted to force his way out … They thought they had a plan. The plan was to get him traded to the Denver Broncos. But, the Eagles weren’t playing. They weren’t going along with the plan.

“Then, John Elway — at the insistence of Tom Condon — calls Howie Roseman and says ‘what do you think?’ And Elway calls Roseman who says ‘I’m not of a mind to trade this guy and if I am, it’s going to cost a lot. Probably two No. 2 picks.’ Elway hangs up the phone and says ‘okay, we’re moving on, because he is not worth and I need to rebuild my team from a lot of players leaving. I just won the Super Bowl. I’m in the Hall of Fame, I don’t know about you, but I know what I’m doing.’

“Now, during the draft Tom Condon’s left holding the bag and figure out what he’s going to do with Bradford. The Jets weren’t interested. I know Todd Bowles wanted no part of Sam Bradford. The Bills were going in a totally different route. That quickly dried up.”

“On Sunday night after the draft I was speaking to Condon on the phone. He said he was going to call Bradford. Then they go dark. For a week nothing happens. No phone calls returned. No texts returned to the organization from Sam Bradford.

“They continued to make another round of calls around the league. Nothing goes on. No possible trade options. They waived the white flag. On Sunday night before Bradford comes to NovaCare, Condon called him and asked what he was doing and Bradford said, I’m going in. So, it was evident that Sam Bradford was driving this situation. Not his agent.”

Not a good look for Bradford. I think we would be more able to understand and, hell, even forgive Bradford if this was driven by his agent. Business, after all. But, damn, Bradford is such a clown. A two-year contract is not long-term.