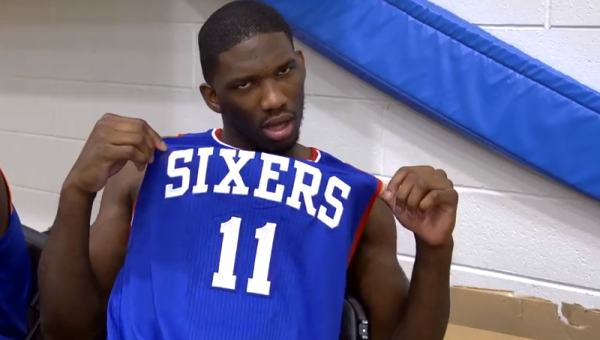 Joel Embiid is finally healthy, so we’re told. So he’s spending his summer getting back into basketball shape – well, whichever way he could – and had quite a night on Friday night. Embiid was in Hollywood and spent some time doing drills with his trainer, Drew Hanlen, and then hit up a nightclub where he arm wrestled Justin Bieber.

Apparently Bieber was spotted playing basketball before heading into the West Hollywood nightclub, Hyde. Inside Hyde, however, it was Bieber vs. Embiid in a rousing arm wrestling contest.

@justinbieber Vs @joelembiid Arm wrestling match at Hyde.. In all fairness Joel is 7 feet tall!.. Still had to take the bets and ref the match though.. In my element 😩😂 @taavcooperman @kingfrankiedelgado @noirrob #JustinBieber #JoelEmbiid #HydeSunset

As for Embiid’s workout, here are some drills he was doing with Hanlen, who’s an NBA strategic skills coach and consultant, and also the CEO of Pure Sweat Basketball.

Sure, it’s not Embiid vs. an NBA player, but the glimpses we’ve seen of him? Lawd mercy.