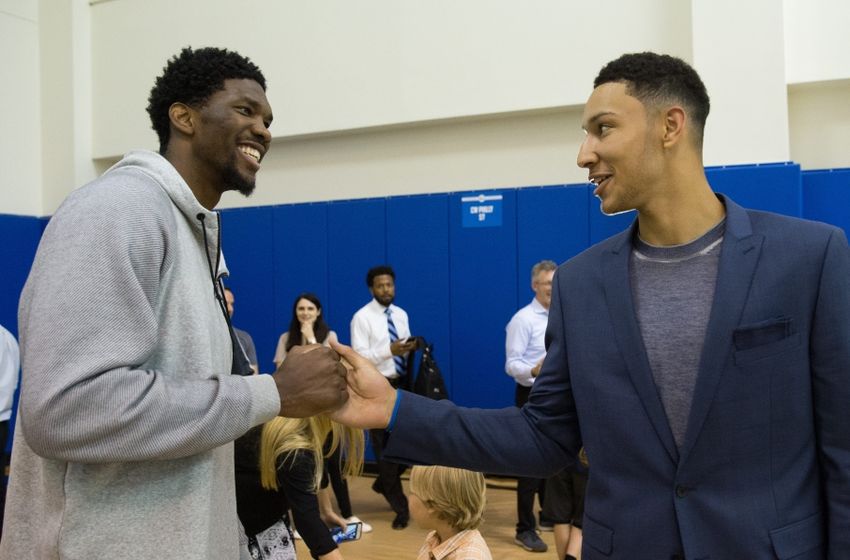 Tom Byrne is a Philly Influencer contributor and sports radio host on SiriusXM’s Mad Dog Sports Radio and NBA Radio. He started at SiriusXM in 2013 after hosting “The Tom Byrne Show” on 97.5 The Fanatic.

PHILADELPHIA — Watching “The Homie,” aka Dario Saric, help Croatia to the 1-seed in Group B of the Summer Olympics at the ripe age of 22 has Sixers Nation dreaming of what could be. So what if Saric doesn’t appear to be athletic enough to guard small forwards at the NBA level? Can you blame them? The young Sixers fan has only the Allen Iverson era to remember.  As exciting as AI was, he only delivered one trip to the NBA Finals.¹ Doc, Moses, Toney² and the ’83 Sixers won 33 years ago!

After Iverson was finally washed up, the Sixers tried to convince their fan base they were ready to compete. Who was the face of the organization?  Andre Iguodala. A long, athletic small forward who possessed elite perimeter defensive skills and finished as well as anyone in the league on the break.  The problem was Iguodala was overpaid (6 years, $80 mil) and was never a reliable number one threat offensively. Look up the definition of bricklayer in the dictionary and Iggy’s face will appear.³

Under Doug Collins’ watchful eye, the team consistently fought to be around .500. They overachieved in 2012, becoming just the fifth 8-seed to knock out a number one.  Realistically, Chicago’s championship hopes were dashed when Derrick Rose suffered a torn left ACL in Game 1. Joakim Noah went down during the series, too, leaving the Bulls extremely shorthanded against a Sixers team that defended nearly as well as Chicago did. In the next round, the aging Celtics pushed the Sixers out in seven games.

On August 10, 2012, the organization made a move thought to put them in the upper echelon of the Eastern Conference. In the four-team deal, the Sixers traded Iguodala, rookie Maurice Harkless and Nikola Vučević. In exchange, they received Andrew Bynum, who was widely considered the second-best center in the league at just 24 years of age and coming off the best season of his career.

What the team did not know is that they were getting damaged goods. Bynum failed to play a single second in a Sixers uniform. The 7-foot, 285-pounder arrived with the promise of returning the organization to the glory days of years past only to see him repeatedly unable to play without ever suffering a specific injury. The stories about Bynum getting hurt while bowling didn’t help.  The Sixers floundered to a 34-win season and missed the playoffs.

After the year Collins left, Bynum was not re-signed and the Sixers finally did what had to be done. They started the process of rebuilding. Sam Hinkie was brought in from Houston as the new general manager. He and majority owner Joshua Harris made the tough, but proper, decision to tank.

The most important decisions were to come on draft night. In a risky move, the organization traded Jrue Holiday, their young All-Star point guard, to New Orleans in exchange for the rights to the sixth overall pick that year, Nerlens Noel. The Pelicans also sent a 2014 first-round pick to the Sixers.

Noel, a 7-foot center from Kentucky, had been a candidate to be selected No. 1 overall before slipping to sixth. With their own pick the team selected Michael Carter-Williams from Syracuse. Noel, nursing a knee injury, sat out the entire season.

Despite the performance of MCW, the Sixers were terrible in 2014. They were 19-73 and tied an NBA record by losing 26 straight games. It was exactly what Hinkie, Harris and head coach Brett Brown expected and secretly hoped for.5 In the NBA, in order to get to heaven you must go to hell first. The worst place to be stuck in is purgatory.  The Sixers and their fans were indeed in sports hell.

What we did not know at the time is that it would be an extended stay in the home of fire and flies.

Hinkie took tanking to the next level in the 2014 NBA Draft. With the third overall pick, Hinkie grabbed injured Kansas big man Joel Embiid. The Cameroonian had fractured the navicular bone in his right foot during pre-draft workouts. For a second consecutive season, the Sixers would be without their first-round pick on the court.

With the 10th overall selection, Hinkie made a surprising move taking point guard Elfrid Payton from Louisiana-Lafayette.6 Confusion washed over the Sixers fan base for a brief time until it was announced the team had traded Payton to the Orlando Magic for the rights to Saric, who was pegged by Orlando with the 12th pick.

Saric was locked into a contract with Anadolu Efes his team in Turkey. It would be two years before he would be state-side donning a Sixers uniform for the first time.7

The Sixers, playing in front of friends and family at the Wells Fargo Center, won just 18 games the ensuing season. The big news came before the trade deadline when Hinkie shockingly dealt MCW in a three-team trade in exchange for the Los Angeles Lakers’ first-round pick (top-5 protected).8

Jahlil Okafor, who was taken with the third overall pick in the 2015 Draft,9 gave the Sixers plenty of problems with his conduct off the court. His role in a Boston street fight that earned him TMZ scrutiny and a two-game suspension might have been the final straw for Hinkie.10

Unhappy with his role, Hinkie resigned with days left in the season. Jerry Colangelo was in charge after NBA commissioner Adam Silver reportedly pushed for a change. Colangelo then hired his son, Bryan, to take over his his role as team president.

Hinkie had died for our sins.

In the deal Josh Harris negotiated with Silver, the Sixers were granted the number one pick in the 2016 NBA Draft.11 The first pick which had eluded the franchise over the previous two years finally had been procured.

Hinkie was not the first GM to employ the tanking strategy, but his rebuild was the first of its kind. What made the Sixers different was their patience. In particular, Hinkie’s definition of what represented true progress. He took advantage of a broken system acquiring as much high-end talent and assets as possible all while the team routinely was pummeled. By hiring Colangelo, Harris rid himself of blame for long-term tanking while keeping highly coveted assets.

Australian sensation Ben Simmons, taken with the number one overall pick this year, is an extremely unique talent, with the size and strength of a power forward as well as the vision and passing ability of a point guard. He has the size and skill to play and defend all five positions and is a tremendously unselfish guy.12

But the best asset the Sixers have may be Joel Embiid. Take a listen to Brian Scalabrine on Tuesday drooling over Embiid, whom he worked out before the 2014 draft.

Remember, Embiid has grown two inches and put on 25 pounds of muscle since being drafted.

The city has been energized like it hasn’t been since Allen Iverson made his return to Philadelphia. Now there is reason for long-term optimism. As unlikely as it is that a star free agent comes to Philly anytime in the very near future, the bottom line is they’re in great shape cap-wise and will likely have two more lottery picks in next year’s draft (unless the Lakers get lucky in the lottery. The pick acquired in the MCW deal is top-3 protected). The light at the end of the tunnel has finally become visible.

1In fact, AI never again advanced the Sixers past the second round.

2 Toney remains one of the most underrated stars in the history of the NBA. The rift between him and the organization is a damn shame. The man deserved to be treated better. To this day, he is impossible to track down. One of the reasons the Sixers did not retire Moses Malone’s number earlier is because big Mo wanted his teammates’ numbers on the banner, as well. It seems the teammate he wanted most on that banner was Toney.

3Assuming you’re in a Philly-area library.  In a related note, what the hell was Portland thinking giving Evan Turner $70 million!?

4 I know it’s hard to believe – MCW has been a bust in Milwaukee.

5 Well, maybe not Brown. Has anyone been given a worse hand to play in their first three years as a head coach?

6 Remember MCW’s face live at the draft? Hinkie also got back the Sixers first-round pick in 2017 dealt in the Bynum deal.

7 Don’t you love the pundits now blaming the failed Turkish revolution as the reason Saric had signed even after 6-9 forward had consistently said for two years he would sign in 2016?

8 The MCW deal now looks like a steal for Philly.

9 Porzingis would have been nice. Oh well.

10 Embiid missing another season didn’t help. Unless you consider that Simmons isn’t a 76er if not for the injury.

12 You know the day is coming where we will kill Simmons for passing rather than shooting in a big spot.