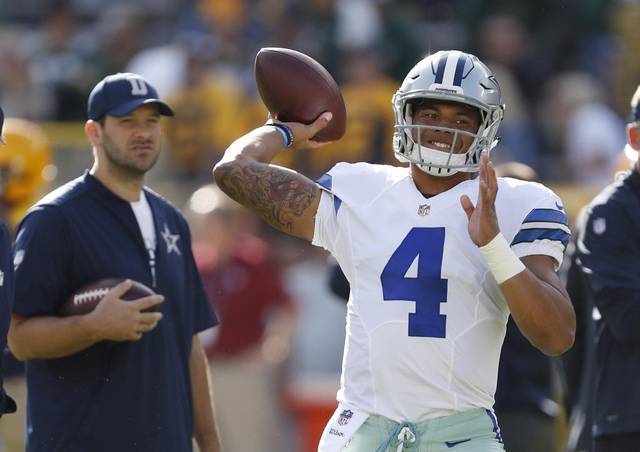 Forget about seeing Tony Romo on Sunday, at least according to Dallas Cowboys owner Jerry Jones.

Jones stated Tuesday afternoon that not only will Prescott be the starter at quarterback when the Cowboys visit Philadelphia to clash with the Eagles, but that “it would not be worth the risk” to play Romo.

We don’t feel like any game we’d get from him stepping out there running some plays, several plays, a series of plays would be worth the risk. I think we pretty much stay to plan. It wouldn’t surprise me to see us get some of the same snaps.

So if Romo isn’t playing, does that mean Mark Sanchez will back up Prescott? Eagles defensive coordinator Jim Schwartz admitted Tuesday during his press conference that the Birds are preparing for Prescott, Romo and Sanchez.

Despite the injuries to Oakland Raiders quarterback Derek Carr and Tennessee Titans signal-caller Marcus Mariota last week, I don’t necessarily disagree with Prescott being out there. I’ve seen too many instances where teams have rested their starters in the final week of the season to try and avoid injury with their bye locked up only to come out flat in the divisional round.

In fact, the 2007 Dallas Cowboys are a perfect example. They rested Romo and company in Week 17, then lost two weeks later to the New York Giants for a chance to go to the NFC Championship Game.