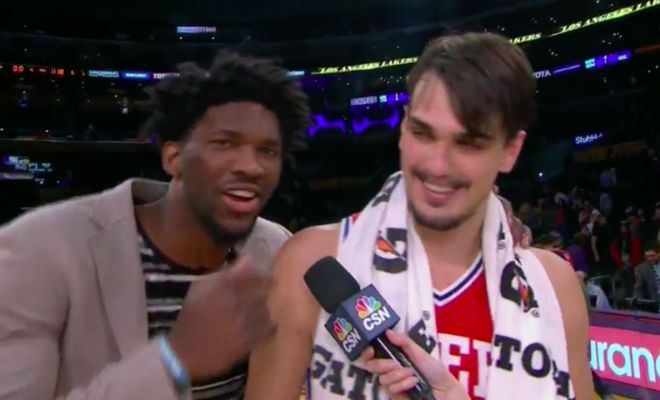 I think the world of Joel Embiid. He’s everything a superstar athlete should be – hard worker, positive example and likable with a great personality. If Embiid can somehow stay healthy and lead the 76ers to prominence, he’ll be a folk hero in a town that reveres its legends and all time favorites.

But, I must step in and give JoJo a strong “Ray Didinger Reality Check.”

He’s not the Rookie of the Year.

That award should go to Dario Saric, without question.

Embiid told ESPN’s Jackie MacMullen that, in all due respect to Saric and Milwaukee’s Malcolm Brogdon, he should win the award despite playing in 31 games due to injuries and restrictions. In that same story, Embiid described how he found out his meniscus tear was less severe than expected- he was half asleep after waking up from the operation.

I’m sorry, but the talented center must still be woozy.

Don’t be mistaken, his numbers in 31 games are remarkable. In just over 25 minutes a contest, he averaged 20 points with seven rebounds and about two blocks. Even if he played the rest of the season with his minute and back to back restrictions, he would’ve won Rookie of the Year with his eyes closed. But, he couldn’t stay on the floor. The fewest amount of games a Rookie of the Year winner played was 50 in 1985 when the Knicks Patrick Ewing averaged 20 points, nine rebounds and two blocks a night. These are very similar numbers to Embiid and in higher quantity.

Most Valuable Players don’t capture that distinction without playing. Coaches of the Year must be on the bench night in and out while producing positive results. Leaving the realm of sports momentarily, politicians don’t win elections without campaigning. Unfortunately, sitting out with injuries and dominating the Twitter-verse doesn’t fall under the necessary qualifications of being a Rookie of the Year.

The award should go to Saric in a landslide. His season stats of almost 13 points and six rebounds in 26 minutes a game don’t tell the whole story. Consider the fact his numbers increased once he got more minutes due to Embiid’s injury and Ersan Ilyasova’s departure. Don’t forget Saric’s most impressive stat, 81 games played, following a season overseas and The Olympics. Thus, factor in that Saric needed to adjust his game from the European style quickly, which he did very well after a brief, but slow start.

Brogdon’s Bucks may be in the playoffs, but Saric was more impressive on the stat sheet. Brogdon played with talents such as Giannis Antetokounmpo an entire season. Saric only suited up with Embiid for 31 games.

If, for some reason, Embiid is voted Rookie of the Year based on what “could’ve” happened, he should do the right thing and present the award to Saric at the ceremony.

-Phillies fireball reliever Edubray Ramos annoyed me the most out of any Philadelphia sports figure this week. He claimed his wild pitch above the head of Mets shortstop Asdrubal Cabrera wasn’t on purpose. OK, and humans can fly on their own. I’m calling bologna on Ramos’ claim. I believe he did it on purpose. Now, regardless if he did, it woke a struggling New York team up and set the tone for the rest of the series, a blowout in Game 2 and failed rally by the Phils in Game 3. The Phillies are a young, inexperienced team. Losses like the ones to the Mets can be season deflating, even in April. It was extremely stupid of Ramos to lose his control like that.

-Sticking with your Phightins’, they’ve averaged nearly 35,000 at Citizens Bank Park in six home games so far. Disregarding that some were traveling Mets fans, that’s a great average for April considering the Phillies aren’t expected to be very good. There’s clearly interest in baseball amongst Philadelphians. Maybe it’s optimism for the future and the prospects in waiting. Maybe it’s the craving for a winner after 20 straight seasons in Philadelphia sports without a playoff game or series victory. Either way, the Phils front office didn’t do a good job putting the best product on the field for the first homestead. Jeremy Hellickson and Clay Buchholz were over $30 million of unnecessary money as they’re not players of the future. Either bring kids up or use that money for someone who will be here in at least two years. If Forbes is correct, and the Phillies really were the most profitable team in 2016, shouldn’t that constitute a better team? This patient approach is a waste of time.

-It was an exciting opening night of the Stanley Cup Playoffs with five close games, two that went to overtime, four of the five won by road teams. Three of the five winners were the Penguins, Rangers and Bruins, teams I consider either rivals of the Orange and Black. Hopefully that bothers everyone in the Flyers organization. While they’re home possibly playing golf, their most disliked foes are taking part in postseason hockey, with a chance to win The Cup. How disheartening.