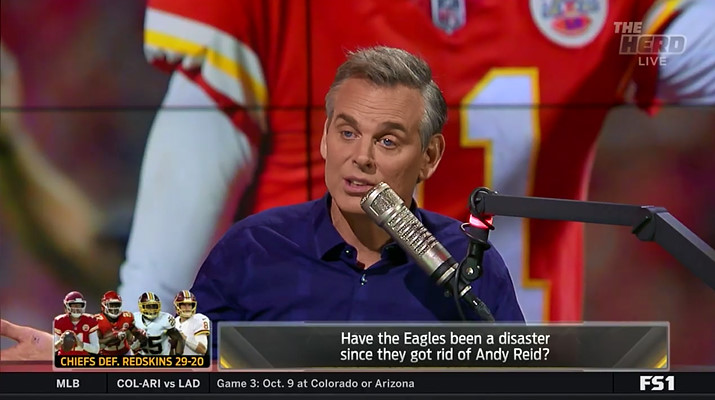 I wish I didn’t really have to bring attention to Colin Cowherd and his bloviating, but I can’t help myself this time. During his show today, Cowherd randomly took a shot at Philadelphia as a city, us fans, and invoked old stereotypes that have nothing to do with the current fanbase. All because Andy Reid won a regular season game last night against the Washington Redskins.

Really. That’s the only reason. Cowherd even invoked Terry Francona! And … George Washington.

“Nothing makes me happier than Andy Reid and Terry Francona winning as they leave Philadelphia. Philadelphia had Andy Reid. You watch that game last night? That was offensive wizardry. Philadelphia ran him out of town. Terrific. Ran Terry Francona out of town. By the way, Philadelphia used to be the nation’s capital, John. They butchered that. Reportedly ran George Washington right out of town. So happy for Andy Reid. What a coach … I kind of made that last one up. They have a jail and a courthouse beneath their stadium. That sums it up … Some of these fan bases are looney tunes. They’re looney tunes. By the way, Chip Kelly won 10 games his first two years, right? They wanna run him out of town. ‘Well, he doesn’t play football the way we like football.’ He won games with average quarterbacks. So you’ve run off Chip Kelly and Andy Reid who are winning games with quarterbacks with career 85 passer ratings. Aye yai yai. Your loss, Kansas City’s gain.”

Philadelphia is the dumbest sports city in America pic.twitter.com/gx10OchApB

I do appreciate what Reid brought to the Eagles, but this blowhard can’t help himself but to rub it in our faces. Someone might want to let Cowherd know the Chiefs only have one playoff win in Reid’s four seasons as their head coach.

But the fact of the matter remains that Cowherd knows Philly is pretty high on the Eagles right now, so he knew exactly what to do to get some heat in the mainstream. Nevermind the fact that it was pretty clear Francona couldn’t manage a team of terrible talent to the playoffs. Reid’s players flat out quit on him during his last season in Philly. It has nothing to do with running anyone out of town.

But, that doesn’t exactly sound good to people outside of Philly, right? In fact, it sounds plausible. It actually sounds like it makes a whole lot of damn sense. But Cowherd doesn’t want any of that. Not at all. Nope. So he does what he’s done so many times before, and just throw out typical bullshit to get a rise out of everyone here, and, I have to admit, he’s done it.