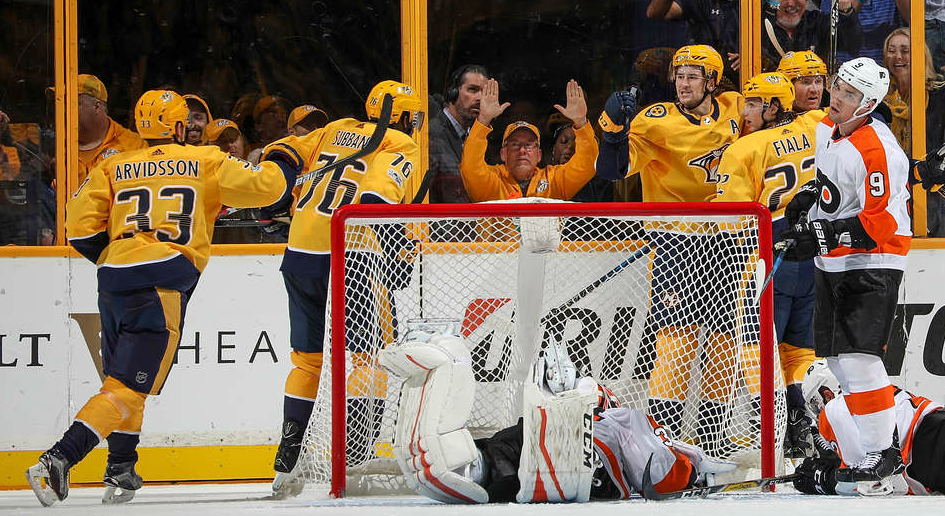 The saga of professional sports referees vs. Philadelphia sports teams came back to life in the Flyers heartbreaking 6-5 loss to the Nashville Predators Tuesday Night.

It was the third home opener that the Flyers were set to play the villain on their season opening four game road trip which included three California games and ended in Nashville. Looking to continue their home ice advantage Bridgestone Area was packed and loud as ever for the home opener.

The Predators came into this game without a win this season so they wanted to take it to the Flyers in front of their home crowd, and they did just that.

The Predators opened up the scoring with a power play goal from Craig Smith just 4:17 into the game which would allow them to take a 1-0 lead into the second period. They would then tack on two more goals from Scott Hartnell and, former Pittsburgh Penguin, Nick Bonino. They would take a 3-0 lead into the midpoint of the game and it seemed like the Flyers were unable to get anything going.

Yes, that’s right, Andrew MacDonald was the one to spark the Flyers comeback with a slapper from the slot off of a slick feed from Scott Laughton. Just 16 seconds later, Nolan Patrick potted his first goal of his career to pull the Flyers to within one goal. 4:20 later the Flyers would tack on another goal from Valterri Filppula to bring the game to a tie before the end of the second period.

But they weren’t done yet. 5:03 into the third period Travis Konecny wired a goal past Pekka Rinne to put the Flyers ahead 4-3. The Flyers then drew another power play and Filppula was able to get his second of the night on the man advantage putting the Flyers up by two with 13:12 to go in the contest.

The Predators pulled within one less than a minute later with Filip Forsberg sniping one short side over the shoulder of Brian Elliott.

The game was then back and forth for about ten minutes.

Dale Weise, who admittedly had played a great game up until this point, took a holding penalty on a dump and chase and to make matters worse, MacDonald took another tripping penalty on the delayed call. The Predators would get two full minutes of a two-man advantage. The call on Weise – 10 out of 10 times I have seen that play occur goes in the favor of the forechecker, but it looked like the refs wanted to even things up. The MacDonald play was just on him, clearly a trip.

What team wouldn’t capitalize on a 6-on-3? The Predators pulled Rinne to get the extra skater, and Hartnell would get his second of the night on the power play to even up the score 5-5.

Flyers coach Dave Hakstol decided to challenge the play for offsides, it looked to be very close but after an extremely short deliberation from the referees, the goal stood. New to the NHL this year is that if you fail on an offsides challenge instead of losing your timeout you get a delay of game penalty. So the Flyers were then down again two men for another Predators power play.

Then came the dagger. Filip Forsberg scored with 36 seconds to go in the third period to lift Nashville, 6-5.

This was an extremely difficult loss for the Flyers as they, at one point, had scored five unanswered goals to pull ahead by two but they just couldn’t hold the lead. The Flyers will have to shake this one off and get ready for their home opener Saturday against the Washington Capitals.

Notes: The new delay of game penalty is the NHL’s way of trying to hide their mistake of allowing challenges in the first place. They weren’t made for plays like the Forsberg challenge in last year’s Stanley Cup Final, but rather the play against Matt Duchene who was offsides by ten yards. It is going to take the NHL awhile to figure out how to make reviews legitimate in the sport of hockey.