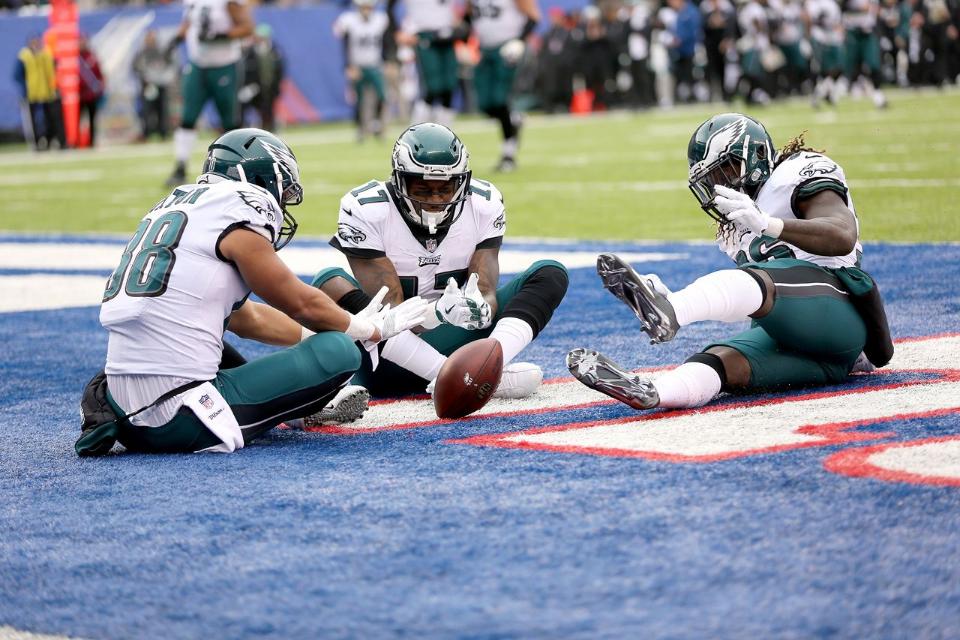 For 59 minutes, Eli Manning and the New York Giants shredded Jim Schwartz’s bunch, but not the final one.

Nick Foles tossed four touchdown passes and the Eagles needed a late goal-line stand to fend off the pesky G-Men 34-29 on Sunday afternoon and clinch a first-round bye in the NFC playoffs.

After a Jake Elliott 20-yard field goal staked the Eagles to a 34-29 advantage with 3:56 to play, the Giants drove all the way to the Philadelphia 9-yard line on their ensuing drive. That’s when the Eagles’ defense finally stepped up. Rodney McLeod, more on his awful tackling later, made a great play in the right flat on first down. Ronald Darby, who bit on a plethora of double moves Sunday, didn’t on this attempt into the back left corner on Roger Lewis on second down. The Giants elected to run the ball on third down and gained five with Shane Vereen, but immediately lost those five following a false start on fourth down. Then it was Corey Graham with great coverage on Evan Engram in the back of the end zone to seal the outcome for the Eagles.

1st down: McLeod with a nice tackle in the flat
2nd down: Darby doesn't bite on Lewis' double move
3rd down: Vereen runs for 5 yards
4th down: False start and Graham blankets Engram in the back of the end zone pic.twitter.com/5MsVCWGuMa

Philadelphia’s special teams unit is why it won the game. Derek Barnett blocked an extra point, Kamu Grugier-Hill blocked a punt and Malcolm Jenkins blocked a field goal. If it weren’t for these critical plays, all the Giants would’ve needed was a field goal at the end.

Special teams is why the Eagles won today. Derek Barnett had a blocked extra point, Kamu Grugier-Hill a blocked punt and Malcolm Jenkins a blocked FG. If not for these plays, all the Giants would've needed at the end was a FG instead of a TD. pic.twitter.com/pz40Xs7n8I

Foles threw for 237 yards on 24-of-38 efficiency in his first start filling in for Carson Wentz, who tore his ACL last Sunday in the Eagles’ win over the Los Angeles Rams. He was great in the red zone, but did miss on some opportunities in between the 20’s, but he was fine overall.

Manning was 37-of-57 for 434 yards with three touchdowns and an interception. The Eagles’ front seven didn’t pressure Manning at all, allowing him to pick apart their secondary. Whether it was getting the ball out quick on the slants or sitting in the pocket and allowing the double moves to materialize, Darby and Jalen Mills were not up to task defending the lackluster trio of Sterling Shepared, Tavarres King and Roger Lewis at wide receiver. Shepared hauled in 11 receptions for 139 yards, while Lewis and King combined for 144 yards on six catches.

Missed tackles also continue to plague the defense. Rodney McLeod was pitiful with his angles and recognition. For a second week in a row, he missed a critical tackle along the sideline which led to a big gain. This Shepard 67-yard score to the house was an exact replica of Cooper Kupp’s long reception last week.

2nd week in a row Rodney McLeod has missed a critical tackle along the sideline. This was a replica of Cooper Kupp's long reception last week. 67 yards to the house for Sterling Shepard. This is despicable. pic.twitter.com/4WwEMzuB5A

A perfect play to summarize the secondary’s efforts was this 57-yard touchdown to King. First of all, Darby gets burned on the quick slant and McLeod’s peculiar angle and slow reaction to this play allowed King to get all the way to the end zone.

Darby gets burned by King on the quick slant, but that was a pitiful effort by Rodney McLeod. He's been brutal the last few weeks. pic.twitter.com/HkgypJqY4U

The Eagles’ defense hadn’t allowed a first quarter touchdown over their first 11 games, but have now surrendered one the last three weeks. In fact, the Giants found paydirt on their first three possessions of the contest and racked up 250 yards en route to a 20-7 advantage at the 13:44 mark of the second quarter. Foles’ first touchdown toss went to Alshon Jeffery in the back of the end zone on Philadelphia’s opening trek of the game.

Great start for Foles, completing all 4 of his passes for 27 yards on the Eagles' opening series. Alshon Jeffery worked the back of the end zone for the touchdown. pic.twitter.com/P1oigZ8Dp6

As bad as Darby played Sunday, this interception and runback he had near the midway point of the second quarter was huge.

Ronald Darby with the pick and great runback! Maybe this is the spark the Eagles need. pic.twitter.com/vTsmX3Ky6P

The turnover set up a 10-yard score from Foles to Ertz, who ran a double move and boxed out his defender on the goal line to make it 20-14.

Ertz with the double move on Adams, boxes him out and hauls in the TD from Foles. pic.twitter.com/gCC5dHBHve

Hill’s blocked punt then set the Eagles up for Trey Burton’s 13-yard touchdown reception and a 21-20 lead.

The Giants were able to add a field goal before the break and took a 23-21 edge into the locker room, but the Eagles went back in front when Elliott connected from 28 yards out on their opening touch of the third. Agholor’s fantastic 10-yard TD grab over the back of a Giants defender increased the margin to 31-23 late in the third.

That was a hell of a catch by Agholor!! Not sure what I liked better the TD or alley-oop dunk on the celebration! pic.twitter.com/koXMCDq4xp

Covering tight ends and running backs continues to be a problem for the Eagles’ defense since Jordan Hicks went down with his Achilles injury. New York’s running backs and tight ends combined for 19 receptions and 152 yards.Evan Engram hauled in eight of those grabs for 87 yards.

Evan Engram having his way against the Eagles defense early on. He has 4 receptions for 49 yards. Philly has been struggling with RBs and TEs since Hicks' injury. King burned Mills for the TD on a double move. pic.twitter.com/Lh2stQcMLs

I thought Jason Kelce played a hell of a game. Check him out on this play making a pair of blocks on the second level to spring Jay Ajayi free for this 22-yard run.

Kelce with a pair of blocks on the 2nd level to spring Ajayi free for 22 yards, that was awesome! pic.twitter.com/pAq3m3IcI5

There was also this play where Kelce and Halapoulivaati Vaitai both made blocks on the second level to allow Jeffery to gallop for 19 yards.

Check out Kelce and Big V with beautiful blocks on the 2nd level for Jeffery on this screen. pic.twitter.com/d9SJwIVYzc

Thank god the Eagles played the Giants and not an NFC contender this week because the defense was abysmal. They were able to escape MetLife Stadium with a win, but if this was a playoff game at the Linc, it wouldn’t have been pretty.

Hopefully Schwartz can clean up these glaring issues quickly.