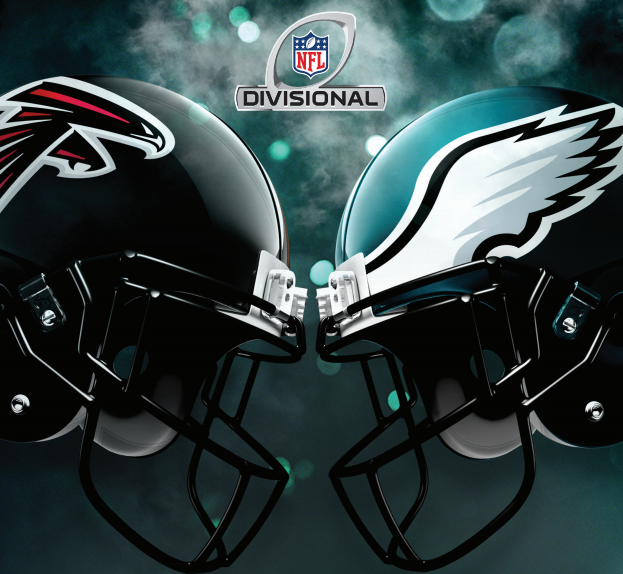 The Eagles’ first playoff game in four years occurs Saturday afternoon at The Linc. The fervor in the city has dwindled with the injury to Carson Wentz, but the Eagles are looking to change all perception and head to the NFC Championship Game next weekend. They’ll have to go through the previous NFC Champions in the Atlanta Falcons to do so.

Did you know Matt Ryan grew up around this area?

This is a true prediction that puts your fandom vs. your logic. When I found out we were playing the Falcons last week, my gut reaction was split. We can talk about last year’s matchup, Jay Ajayi’s former deuces against them, or our recent offensive struggles until the end of time. The fact is, on Saturday night, old cut-ups and highlight reels won’t win you a matchup. The Falcons have won seven out of their last nine and have a potent offensive attack. The Eagles have a dominant front seven and a capable offense. In a matchup where I can’t decide who has the clear upper hand, the tie goes to the home team. Look for the Eagles to neutralize the Falcons’ rushing attack and squeak out the win in a nail biter.

It will be a tight, closely played defensive struggle. Fletcher Cox will need a big game and the same goes for Jay Ajayi. Both will come through and Nick Foles will do enough. The game will come down to turnovers, leaving the Eagles defense to at least set up a touchdown, if not score one. And in the end, in the clutch, the fans will prove why homefield advantage is so coveted. The Eagles will be going to the NFC Championship Game next Sunday.

The Eagles haven’t won a playoff game in almost ten years. They finally have home field advantage and are going up against a Falcons team that has been playing do or die games for about for weeks now. Even though the Eagles have their rest, and the crowd behind them, the loss of Carson Wentz will be too big of a blow in order to pull this one out. Sorry Philly fans but Matt Ryan and Co. have something to prove after last year and I don’t think they are going to let Nick Foles stop them. It’s gonna be a tight one.

It will be a dog (Bird?) fight on Saturday at the Linc. The Atlanta Falcons are riding high after holding the number one scoring offense in the league to 13 points in their own house. They are also favored on the road in the divisional round.

But the Eagles won’t stand for that kind of disrespect from Vegas and the national media. According to NFL Network’s Kevin Brandt, the Falcons were given the first ever second round bye in the history of the NFL. He went on to, not only fire me up with his rant, but said how the Eagles are a team that will thrive being the underdog. I can’t agree with him more.

The Eagles’ run defense should put a strangle hold on Devonta Freeman and Tevin Coleman. The Eagles’ defensive line will control the game. Nick Foles will do enough to win and complete 65% of his passes for 200ish yards and maybe a touchdown, much like Carson Wentz did last season against the Falcons. The offense will ride a potent run game to a victory. The Eagles’ special teams unit could be a difference maker as well. They will need it considering the Falcons’ special teams swung momentum their way.

At the end of the day, I got the good Birds by 10 in a dominant defensive performance.

This week’s game has all the makings of your favorite fantasy tale. As we all cling to the numerous stories compared to Rocky Balboa defeating Ivan Drago, I will focus on the realism of talent and wonder if it is enough to be victorious. “Any Given Sunday” is a phrase that has been washed out more than a pair of 80s stonewash jeans, but still offers a theory that is far from cliché. The Eagles have a shot. So do the Falcons. The question is who is carrying bigger bullets?

This game will come down to two plays for the Eagles, plays we still aren’t sure that Nick Foles can make. All we have is hope. I am predicting a low-scoring test which includes a defensive gameplan that will land Jim Schwartz any job he wants. Foles, if you can hear me, we just need two plays!

I’m a lot more impressed with the Falcons’ defense than I am with their offense at the moment. They’ve had 12 scoring series in their last two games, but nine of them have been Matt Bryant field goals. Julio Jones is a scary toy in Atlanta’s arsenal, however, I think the Eagles’ defensive line can control the game. The Falcons like to use Jones in their intermediate to deep passing game, but the guards of the Falcons are a big mismatch to Cox and Jernigan, not to mention Graham sliding in to play defensive tackle on third down. The Falcons’ defense is sound, but they do allow 4.1 yards per carry on the ground and I think this is the game where the Ajayi trade really pays off. Atlanta kicks four more field goals, but doesn’t find the end zone. I’ve got the Eagles in a slugfest.

Here it is! The Eagles must find a way to keep this thing going! Finally, after a long season of mostly ups, we get to the games that matter. Yes, the Eagles are here because of Carson Wentz, but that doesn’t mean they can’t win without him! They’re 2-1 since the injury in games started by Foles, and if they even tried against the Cowboys in Week 17, they’d be 3-0. Look, it’s going to be ugly and I’m fine with that. The Falcons are a good squad with playmakers on offense and a secondary that can run with anyone. But this is a home game for the Eagles and it’s going to be loud! Communication will be tough and I expect the Eagles to get after Matt Ryan. On the other side, the offensive line must take this game over. I like the Eagles winning a home game, as they have seven times this season.

Kyle Brandt summed it up perfectly on Wednesday:

Rocky Balboa once said "I stopped thinking the way other people think a long time ago."@kylebrandt takes that advice to heart and talks the least respected 1 seed in NFL playoff history for #WhatWeLearned @Eagles pic.twitter.com/YoREcgQNBy

It really seems like the only reason people are picking the Falcons is because how Nick Foles looked in two games that didn’t mean anything. He looked pretty damn good in L.A. when coming in after Carson Wentz got hurt, and looked damned impressive against the New York Giants in the Giants’ most important game of the season.

Except nobody is talking about the Eagles’ defense. This is the same defense that has gotten better since last season when they completely destroyed Matt Ryan and the Falcons at The Linc on November 15, 2016, 24-15. Of course, that doesn’t mean the same thing will happen Saturday afternoon, but the very fact nobody’s talking about it is completely ridiculous. Everybody is focused on Foles.

Which is why the defense will shine. Eagles by a couple of touchdowns.