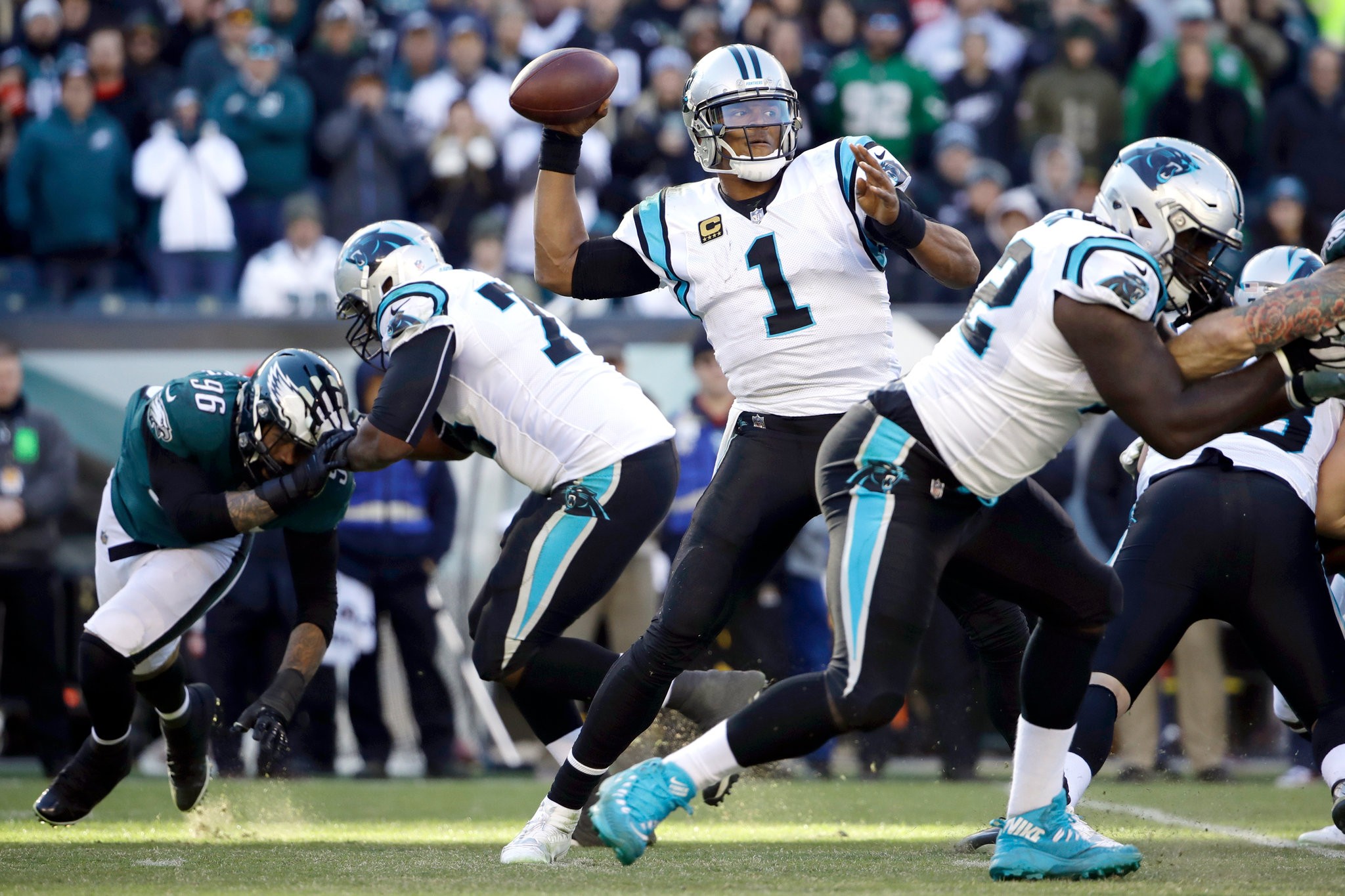 For three quarters it looked like the Super Bowl champions were back.

And then a 17-0 lead disappeared in a blink.

Cam Newton threw for over 200 yards in the fourth quarter as the Philadelphia Eagles defense collapsed in the final 15 minutes as the Carolina Panthers rallied for a 21-17 win on Sunday afternoon at Lincoln Financial Field.

Controlling the clock and winning the time of possession battle is what the Eagles do best and they did it for three quarters. They went on a pair of drives that went longer than 15 plays, including a 9:22 trek where the Eagles used 17 snaps on a 94-yard TD march. The other possession went for 8:22 in the first half, but Jake Elliott missed a short field goal.

The long 9:22 drive vaulted the Eagles to their 17-0 advantage. At this point, Carson Wentz was picking the Panthers apart, completing 15 straight passes at one point. He was 8-of-9 for 73 yards on the marching, including the 1-yard TD pass to Dallas Goedert. Wentz finished 30-of-37 for 310 yards and two touchdowns.

Three consecutive touchdown drives by the Panthers vaulted them to a 21-17 margin. Carolina ran 29 plays for 106 yards on their first five touches, it gained 265 yards on its final three possessions. The second scoring drive was way too easy as Newton hit Jarius Wright over the middle for 28 yards. Carolina came into the game with just one 20-yard completion on 14 tries.

Consecutive TD drives have clawed the Panthers within 17-14. This latest possession looked way too easy. Darby bit bad on the double move. pic.twitter.com/CY1fNaonIq

A quick three-and-out from the Eagles followed and a 35-yard completion to Torrey Smith on a 4th-and-10 got the Panthers into Eagles territory. Jalen Mills missed a tackle, which allowed Smith to speed down the right sideline for extra yardage.

Newton flipped a one-yard TD pass to Greg Olsen on 3rd-and-goal to put Carolina ahead.

3 straight TD drives from the Panthers and just like that they're up 21-17 pic.twitter.com/0Bxbnm8oj4

The Eagles needed just one snap to get into Carolina territory on their ensuing possession, with Alshon Jeffery drawing a 48-yard pass interference penalty.

Eric Reid nearly ended the game with an interception following this Wentz overthrow.

Phew, not a catch pic.twitter.com/SSu4qT0ZrV

Faced with a 3rd-and-2, Wentz had an open Smallwood in the left flat for an easy first down, but instead elected to throw it into double coverage to Jeffery. It fell incomplete. The fourth down play never had a chance as the ball slipped out of Wentz’s hands.

Wentz had an open Smallwood in the left flat on 3rd-and-2, instead threw it into double coverage. Then he couldn't convert the 4th-and-2 and the Eagles lose. Sickening loss. pic.twitter.com/IcJHxt9x57

Not only did the defense collapse in the fourth quarter, Pederson ditched his running game. The running backs totaled just 55 yards on 21 carries. The fourth was when 13 passes were called compared to only one run. There were many instances last season when the Eagles would go on a long time-consuming drive with LeGarratte Blount punishing worn-down defenses in the final frame.

I thought the pass protection was better from the offensive line, even though they finished with four sacks allowed. I still think Jason Peters is struggling and it’s bad enough that I’d seriously consider replacing him with Big V. Unlike previous weeks where Wentz was constantly harassed, he had time to scan the field and was finding Alshon Jeffery and Zach Ertz consistently.

Jeffery showcased the entire repertoire. He toe-tapped beautifully on a 4th-and-5, defenders miss after the catch, snatched the ball effortlessly on his vintage back-shoulder targets and found the end zone. Jeffery hauled in seven receptions for 88 yards and a score.

Alshon Jeffery is toe-tapping, making multiple defenders miss after the catch and getting in the end zone.

He's been a beast! pic.twitter.com/5CEXgcIdhM

Ertz down the seam for 21 yards pic.twitter.com/KYIT56HJsP

Michael Bennett had a monster game as he’s coming into his own following a slow start. He registered his third sack of the season.

Michael Bennett with his 3rd sack of the season, would've been his 30th had it not been for all the roughing the passer penalties pic.twitter.com/1FxRBGpMP9

Bennett took over a drive defensively on Carolina’s opening trek of the second half. He forced Christian McCaffrey out wide on a running play after sliding into the backfield, allowing Jordan Hicks to register the tackle for loss. His pressure on third down resulted into an intentional grounding call and forced the Panthers out of field-goal range.

At 3-4, the Eagles travel to London next Sunday for a clash with the Jacksonville Jaguars.

I’d suggest that Howie Roseman makes a move this week.