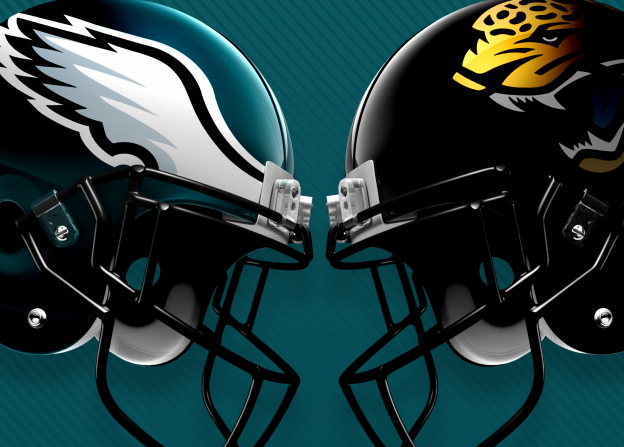 A 17-point lead blown in the fourth quarter.

The Eagles need a win. The NFC East stinks. Can they beat a Jaguars team who were favorites to land back in the AFC Championship Game before dealing with some turmoil themselves?

I feel more confident in winning the Powerball on Saturday than the resolve of this team. To put that in perspective, I read somewhere that you’re more likely to be attacked by a shark and struck by lightning simultaneously than winning the Powerball. I’m happy this game is going to be played in the mediocre hours of Sunday morning. It frees me up to actually watch teams who can execute for four quarters later on. As the IR continues to grow, it’s time for all of us to accept these inconsistencies won’t amount to many victories. I have the Eagles winning in this ultimate battle of “Who Cares?”

I don’t buy into the fact that just because the Jags have played well in London they will win the game. This is a good bounce-back opportunity for either team.

I’m leaning toward the Eagles simply because the Jaguars appear to be a dumpster fire. I’m not confident in this pick at all. Here’s hoping for .500 into the bye.

He’s busy in London and hasn’t sent in a pick yet. Automatic L if he doesn’t before game time!

Can a trip to London be the cure? The Eagles are coming off an embarrassing loss at home to a team they dominated for three quarters. However, just like the going trend in this quest for Super Bowl supremacy, they came up short. I talked at length this off-season about waves when it pertained to last year’s storybook season and now the clarity is mesmerizing. Last year, we were jumping historical waves, while this year it seems we are stuck in a body of water without any paddles. Can we eventually find the that perfect stroke?

Both teams are desperate for a win and the Jaguars do seem to play better in London, but I don’t see enough offensive firepower on Jacksonville’s side for it to move the ball consistently. Eagles will win even if it doesn’t look pretty. Just get back to Philly at 4-4 heading into the bye.

Cheers! Lets raise one up to the season that was supposed to be! The issues and bad luck that have been evident in every loss so far needs to come to an end this week vs the Jags or else the season is a wrap. Please miss me on all “mathematics,” if the Eagles cough this one up, we might be looking at a 6 win season. Who we beating if we cant beat the freaking Jags.

Raise one up Eagles fans… and please, if you’re up early for the game, I will be at Dooney’s Pub in Voorhees with Miller lite & Real 106.1! We’ll be giving away Eagles tix vs the Cowboys (Sunday night) via Miller Lite!

These guys are really picking the Birds… There’s literally nothing to point to that would make me think they’ll beat the Jaguars. Bortles will throw for 300+. The Eagles’ offense comes on strong at the end, but to no avail. There’s nothing more I want than to be wrong.