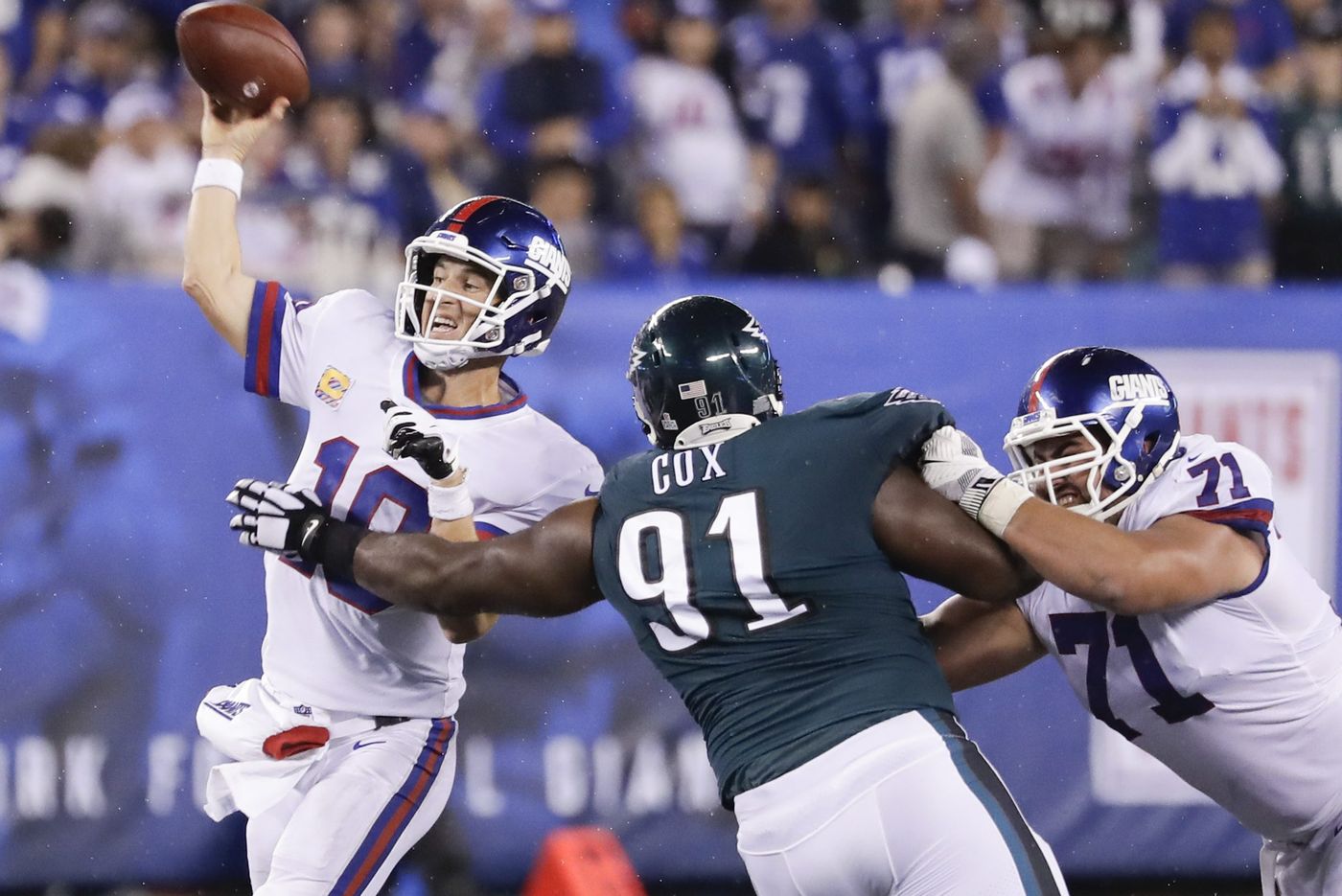 The last time the New York Giants were in Philadelphia, Jake Elliott kicked a game-winning 61-yard field goal at the horn which sent the Eagles on their way to a nine-game winning streak en route to their Super Bowl victory.

Could another win against the G-Men lift the Eagles to another winning streak? They haven’t won more than two games in a row all year.

Carson Wentz is pressing and his teammates aren’t helping him.

Wentz tossed three interceptions against the Saints, finishing 19-of-33 for 156 yards in by far the worst game of his pro career. The Eagles’ offensive line has allowed more hits to their quarterbacks than any line in the NFL and the Saints’ pressure was consistent throughout on Sunday. New Orleans also did a solid job of doubling Zach Ertz, Marshon Lattimore shut down Alshon Jeffery and the rest of Philadelphia’s receivers weren’t creating much separation.

Wentz didn’t have much to work with and because of that, he tried to squeeze some throws he shouldn’t have, including this ill-advised deep shot to Nelson Agholor.

Underthrown, double coverage and this deep shot by Wentz is picked off by Marshon Lattimore pic.twitter.com/lqCoecFmBL

And because he was attempting to fit some balls into tight spots, Wentz wasn’t taking what the defense was giving him, which is an area that needs improvement.

I saw a quarterback that really was fighting and trying to make plays on the field and generate a spark offensively. It just didn’t happen, and so it just — it’s unfortunate because he prides himself in really embracing that and kind of taking this team on his shoulders and leading by example on and off the football field.

It just didn’t happen, and so he’s disappointed, obviously frustrated, as we all are, and we got back out on the field yesterday and worked a little bit, and great opportunity again on Sunday to fix it.

The slow starts have been an all-too-familiar theme for the Eagles this season. They came into the game scoring 21 first quarter points all year, by far the worst in the NFL (2.3 points) after finishing second in the category last year (6.4 points).

Philadelphia started the contest with a three-and-out, the sixth time this season that has occurred. The second series was also a three-and-out and Wentz threw an interception to begin the third trek. The 3rd-and-3 call at the 4:13 mark was peculiar as well. The Eagles moved the ball into New Orleans territory at the 46, but Pederson called a slow developing play-action pass from under center with an offensive line that wasn’t giving Wentz any time to throw over the first 26 minutes of the game.

This was the result.

The Saints went on to score 31 straight points.

It’s been a “challenge to integrate” Golden Tate into the offense, said Eagles offensive coordinator Mike Groh this past week when asked why Tate hasn’t been used more.

“It’s been challenging to integrate him. Certainly, with the way that we weren’t able to stay on the field the other day and finding your rhythm to the offense, that part of it, then everything becomes a little bit disjointed. If we can do a better job of staying on the field and having drives, then everybody gets more involved in the offense.”

“Any time you bring a player in that adds value and adds talent to your roster, I don’t care what position it is, there’s going to be a learning curve. Now, in Golden’s case, this guy has played a ton of football, and he’s a sharp guy, and he understands the scheme of a route or the actual route design. But now how we call the play or how we call that route is where, for his learning curve, is where he needs to learn that and obviously get caught up. He’s spent countless hours with [Eagles wide receivers coach] Gunter [Brewer], with [Eagles offensive coordinator] Mike [Groh], asking questions of myself in these last, what, three weeks or so to try to get himself caught up.”

Why was the trade made if it’s taking so long to get Tate caught up?

“Because it added value to our football team, and we’re going to continue– listen, we didn’t have enough touches in the game Sunday. There weren’t enough snaps. We didn’t stay on the field enough. We didn’t convert third-downs. It has nothing to do with players. It’s we have to do, collectively, a better job of making more plays and staying on the field, and we didn’t do that as an offense Sunday.

Until we can do that and spread the ball around a little bit, you can point the finger all you want.”

The Eagles’ coaching staff promised more touches for Josh Adams last week, but just like the week prior, he had just seven carries. He gained 57 yards on those seven totes and continues to impress with a healthy 6.1 yards per carry.

Groh explained why his touches were limited.

The Eagles have run the ball 38 percent of the time this season, which is 25th.

Eli Manning had just one of his passes fall incomplete in a win against Tampa Bay last week as he finished 17-of-18 for 231 yards and two touchdowns. New York was also 4-for-4 in the red zone. Manning explained why the Giants are playing better football than earlier in the year.

“We’re finishing drives. I think we’re running the ball better than we did, so I feel like we’re playing better football, but we’ve got to continue doing that. They’re a good team.”

“You just have to handle it as it comes up. Every case is a little bit different. Some guys that might not have been here, like [CB] Cre ‘Von [LeBlanc] who is new on campus. Other guys like [CB De’Vante] Bausby have been around for two years. Other guys like Sully [CB Chandon Sullivan] are rookies that it was really their first chance of playing really Cowboys fourth quarter.

Everyone is a little bit different. Just have to every week take what you have and try to find out the best way you think you can perform and win that game. That’s our challenge. We didn’t do a good enough job of that against the Saints in any fashion.”

Schwartz stated that the most disappointing part about the 48-7 loss to the Saints was what he saw in run defense.

I think that’s the most disappointing thing that came out of it.”

What’s going on, why are the Eagles yielding a healthy 4.7 yards per carry?

“I think that any time you talk about the run game you have to talk about all three levels. I think that there were some that you can attribute to D-line techniques and some to linebacker techniques and some to missed tackles. We had one — I mean, it was a difficult situation — but we had one where we had some guys get on the field that didn’t communicate, and all of a sudden we just let a guy walk into the end zone when we should have a guy sitting right there.

But there are some other ones that we can play our techniques a little bit better, and I’ve said this plenty of times: the run game is something that employs all three levels. It’s not just about the front seven, just like coverage isn’t about the back seven. But that was probably the thing I was most disappointed with.”

PREDICTION: The Eagles are practicing without their top five cornerbacks and are now tasked with covering Odell Beckham. The Giants have played some better football coming in and my confidence in the Birds is dwindling.