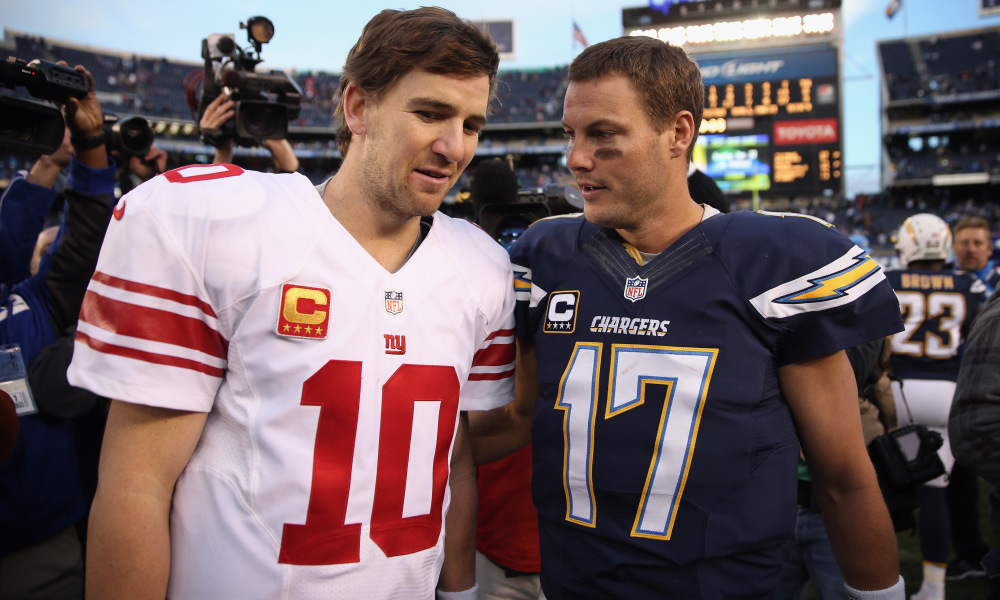 On a recent edition of PiLive, the question was asked, “Whose career would you rather have: Eli Manning or Philip Rivers?”

I was the only one on the panel who said Rivers and was roundly criticized for it. I apologized for what I feel is the correct answer as it nearly gave Sean Brace (@Sean_Brace) and Jigsaw (@TCutillo23) a double heart attack live on the air in the studio because “Eli Manning is a first-ballot Hall of Famer.”

With the recent Los Angeles Chargers playoff push and Rivers being mentioned as possible league MVP candidate, I decided to take another look at this comparison.

After taking some time to look at the two quarterbacks, wouldn’t you know it – I still agree with myself. This isn’t some sort of recency bias in propelling Rivers in front of Manning, mind you. This position is based of my own long-standing opinion that the New York Giants would have been better served if Rivers had been the quarterback they had drafted instead of Manning. If ever there was a comparison that could be made between two quarterbacks, this one could be one of the easiest as both players were taken just picks apart in the same draft, played in the same era, and have played through the same rule changes and offensive landscape. The fact of the matter is Manning has been a completely mediocre quarterback and there really isn’t an argument that can be made to dispute that fact.

First off, let’s get it out of the way, Eli Manning has two Super Bowl rings. I’ll certainly give him credit for being the quarterback on two championship teams. That’s certainly an accomplishment and where the conversation always should and will begin, but I think it shouldn’t end with it as well. Let’s take a look at some basic statistics:

In comparing quarterbacks, if we were starting a team today and we had a choice between two quarterbacks, I’d choose the one that has a better completion and yards per game percentage who has also thrown more touchdowns, thrown a substantially lower amount of interceptions, and has won more games than the other even though he’s started 22 fewer games. As noted by FiveThirtyEight here, Eli has finished in the top 10 of the ESPN-created QBR statistic only four times in the 11 years the stat has been recorded, finishing an average of 16th. I’ll also note that stat doesn’t include Manning’s terrible 2017 and 2018 seasons as well, which won’t help improve those metrics. We won’t consider Rivers’ seven [and soon-to-be eight] Pro Bowl invites to Manning’s four because Pro Bowl invites shouldn’t matter. This where some would say, “Well, yeah, but SUPER BOWLS!” which does mean something, but is it the only thing?

Besides the titles, one other aspect of Manning to give him credit for is his durability. He has been extremely reliable for the Giants since he became their regular starter in 2005. Other than getting McAdoo’d for one game last season, he hasn’t missed a start. That comparison to Rivers is quite similar as well; since becoming the Chargers regular starter a year later in 2006, Rivers hasn’t missed a game. In 2018, Rivers is being talked about as possibly winning an MVP while, as Eagles fans, we are all cheering the news that Giants head coach Pat Shurmur thinks Manning will return as the Giants starter in 2019. Rivers has shown no signs of slowing down and we Eagles fans are praying Eli sticks around on the Giants for another season or two.

While it’s obvious that Rivers has been the better quarterback for the entirety of their respective careers, the conversation gets a lot closer when you look at how they play when it counts in the playoffs. Which Playoff Eli are we going to use though? The two championship years that he averaged 63% completions for 259 yds/gm with an astounding 15-1 TD-INT ratio? Or the four one-and-done years when he averaged 54%, 185 yds/gm, and a 3-7 TD-INT ratio? As far as measurables go, in the playoffs, Manning and Rivers have both played pretty similarly outside of Manning’s other worldly TD-INT rate in that 2011-12 Playoff run.

I’ll give credit where credit is due. In 2011, Manning certainly led his team in the regular season, throughout the playoffs and Super Bowl and that certainly is something to consider. I also give Joe Flacco credit for getting hot and leading his team through a great playoff run and Super Bowl win as well. If SUPER BOWLS are how you prefer to start and finish the conversation, I understand your postition.

In subsequent conversations, it appears I misunderstood the question. I took, “Whose career would you rather have?” as being held in a vacuum as to which player has performed better over the course of his career as a whole. Of course, real life doesn’t work that way. I think Rivers himself would say he’d rather have the career where he plays in the world’s biggest market for a team with long-standing stability and good ownership. Rivers would also probably say he’d live with not being as good of a quarterback and losing more games on the field over his long career in exchange for earning more money, being paired with a defense that got hot at the right time, and winning a championship or two.

I shudder when people say Manning is a sure-fire first-ballot Hall of Famer. He wasn’t a bad quarterback, he was just completely average with a couple of plus years. For all the other QBs considered “elite” or Hall of Fame-discussion worthy from the same era, such as Tom Brady, Drew Brees, Aaron Rodgers, Ben Roethlisberger, Matt Ryan, Tony Romo, Cam Newton, etc., he falls to the bottom. Winning Super Bowl MVP is a nice story, but Mark Rypien and Nick Foles won that award, too, and they didn’t need any helmet catches to help bail them out.

I understand that when comparing players for some, championships mean everything. I don’t take that lightly and figure any titles into my own thought process. What happens if the Chargers make a run this year and win it all? As Eagles fans, we have recent first-hand knowledge of what it takes to win it all in the NFL. The quarterback must play well, but it takes an entire team complementing each other in all three phases of the game along with coaching and a little bit of luck along the way.

I hear quite a bit of talk that Eli Manning is a sure-fire Hall OF Famer, but Phillip Rivers isn’t. Phillip Rivers has been the better quarterback in every measurable statistic for the large majority of his career, but still has that one big asterisk. He has won more games, thrown more TD’s and less INT’s in less games played. Manning has 4 more playoff victories. Sometimes circumstances matter and I think Rivers deserves some credit for succeeding with a franchise of terrible ownership. If the Chargers win the Super Bowl in eight weeks and all of a sudden you think Rivers > Eli, doesn’t that mean that you’d take Rivers over Manning now?