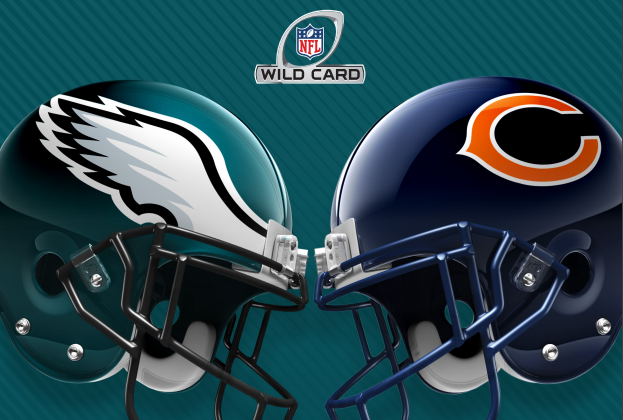 In what can only be described as a small miracle, the Eagles have found themselves in the tournament thanks to the Minnesota Vikings. Who would’ve thought? In a much different feel from last year, the Eagles will have to defend their Super Bowl championship on the road the rest of the way. Can they they get it done in Chicago against the 12-4 Bears at 4:40 ET on Sunday evening on NBC?

The Birds got the top billing of the Wild Card Weekend because everyone loves seeing the champs go down. Unfortunately, they will be sadly disappointed. I’m seeing a slug fest that for those watching who are uninvested, it might seem boring, but for all of us it’ll be high drama. Scoring will be tough for both teams and as long as the Eagles defense, especially the line, shows up, I think the Birds got this one by a field goal.

OK, I don’t really know where to begin with this prediction. This season has been a whirlwind of emotions. I’ve gone from extreme confidence to me sending a tumbleweed GIF as my game prediction. At times, I’ve felt like Willie Beamon on his invisible juice and other times I was Joe Pesci watching his brother get clubbed in Casino. The closeness between the coaches is apparent when you watch how similar these offenses mirror each other. The Bears have a dominant defense in contrast to a surging Eagles defense that’s peaking at the right time. In a shocker, I’m going to pick the Eagles in matchup where Doug’s playoff experience will shine.

The only thing that worries me is the hostile environment that is Soldier Field. However, the Eagles are professionals – I doubt that will affect that outcome of the game. I expect the Birds to do as Malcolm Jenkins said and, “Kick the motherf-ckin’ door down.”

Some say we are underestimating the Bears and Khalil Mack. Others say we have no shot to repeat our crown. I say the magic is real and the Eagles have played their own tricks on us all season just to use the playoffs as their grand finale. There is a little thing called experience, something the Eagles have on both sides of the football. In the end, experience will win out.

To move the ball against the Bears, Nick Foles will have to get the ball out lightning-quick and be efficient. He’s been doing just that the last three weeks, averaging 2.23 seconds per pass. The Bears are 3-2 this year against teams who get rid of the ball in less than 2.5 seconds. Being efficient and maintaining possession also means Foles will have to convert on third down a ton, something he’s done at a high frequency. Since the start of last year’s postseason, Foles is 72-of-90 for 874 yards with nine touchdowns, just one interception and a quarterback rating of 135.8. The magic continues, and Cody Parkey misses a potential game-winner at the horn.

I’m amazed. I still have no idea how this season seemed like it was all for naught, and then the Eagles win out and look like a legit contender. The only problem is, you see why landing home field is so important. If the Eagles want to make noise, win at Chicago, which I believe they can and will. Playoff jitters are a real thing and I expect Mitch Trubisky’s stomach to be filled with them.

Another big night by Foles and the defense steals the show.

There’s an aura surrounding this team, but I still can’t put my finger on it. They defeated a talented Houston Texans team at home. They have the Rams’ number. The Redskins are a laughingstock. It’s still hard for me to go all-in on this team even with Nick Foles leading the charge. And this time, Foles will be battling with bruised ribs that will surely become more battered and bruised as the game moves along on Sunday.

Sure, there’s always a team every year that you just can’t explain their success. While I wouldn’t necessarily call this Eagles season a success given the amount of injuries they’ve had to deal with, I’m still not sure they can travel to Chicago and defeat one of the best defenses in the league just because they’re young and inexperienced. The Eagles of 2000-2001 were young and inexperienced as well and had success winning playoff games.

I won’t pick the Eagles simply because of that tweet above, and the fact that it’s kind of worked out for me in a reverse psychology perspective. So I’ll go with the Bears but wouldn’t be surprised at all if the Birds got out of there with a win.