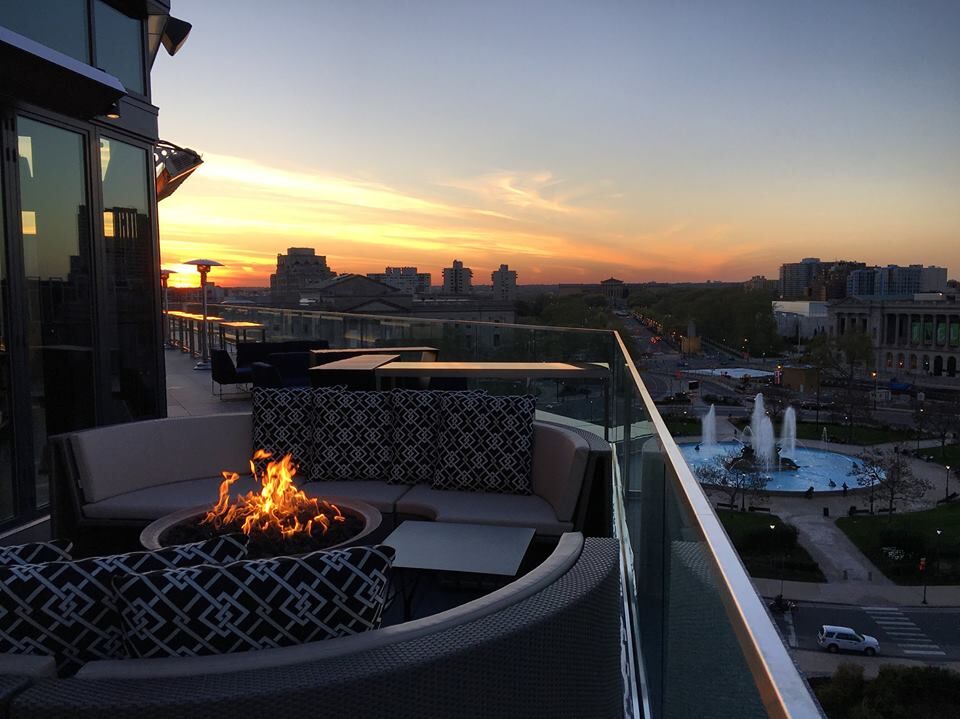 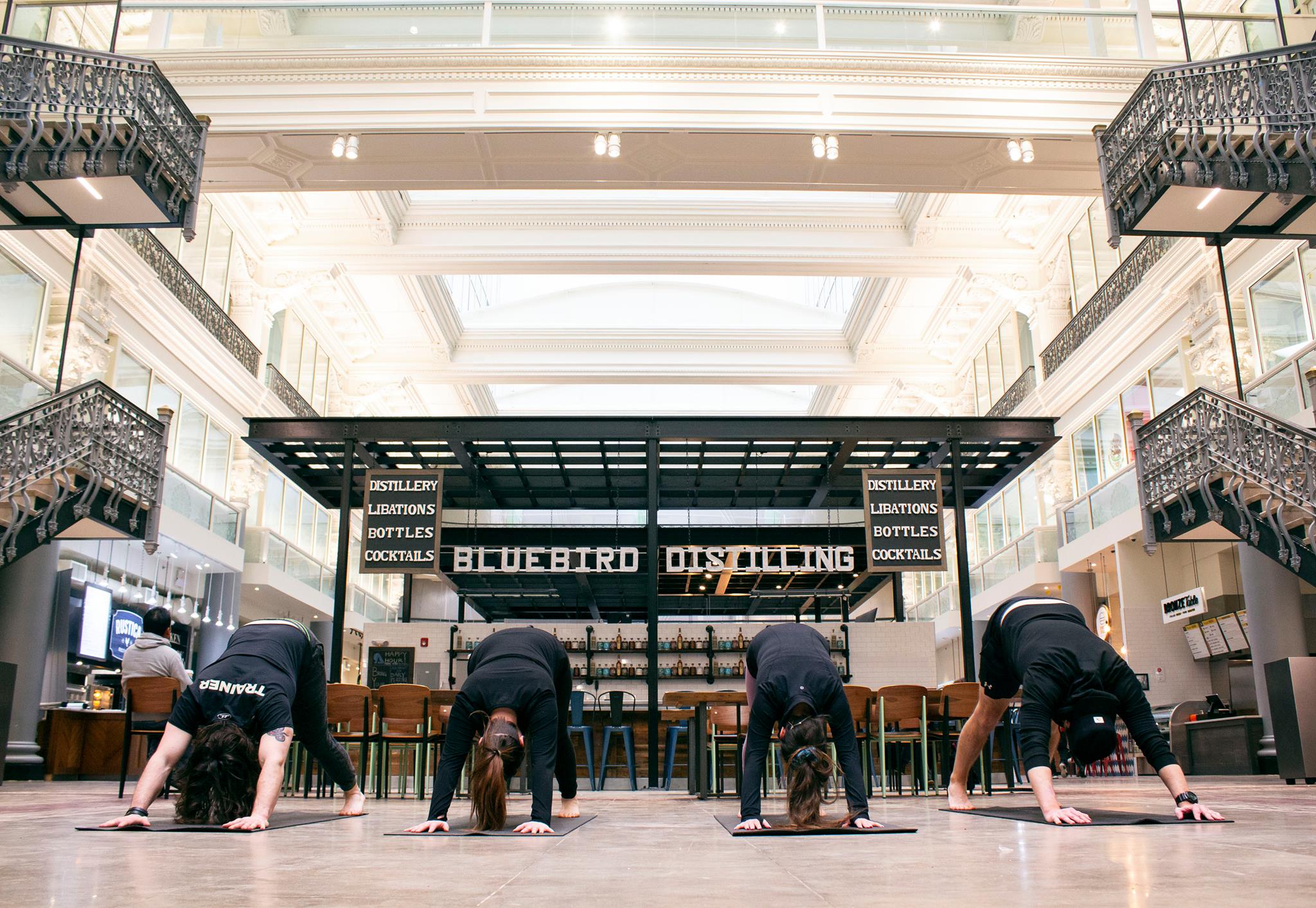 The Bourse, Philadelphia’s artisan food hall on Independence Mall, and SWEAT FITNESS, Philadelphia’s premier fitness club, are teaming up for a charitable cause all summer long. This Yoga Pop-Up series will be offered 9 a.m. – 10 a.m. every Saturday through Labor Day. Come get fit on The Bourse’s patio overlooking Independence Mall. Tickets are $5 and all proceeds benefit a featured rotating charity, including Morris Animal Refuge, Focused Athletics, and Broad Street Ministry. You’ll get treats and a 16 oz. coffee while supporting Morris Animal Refuge. 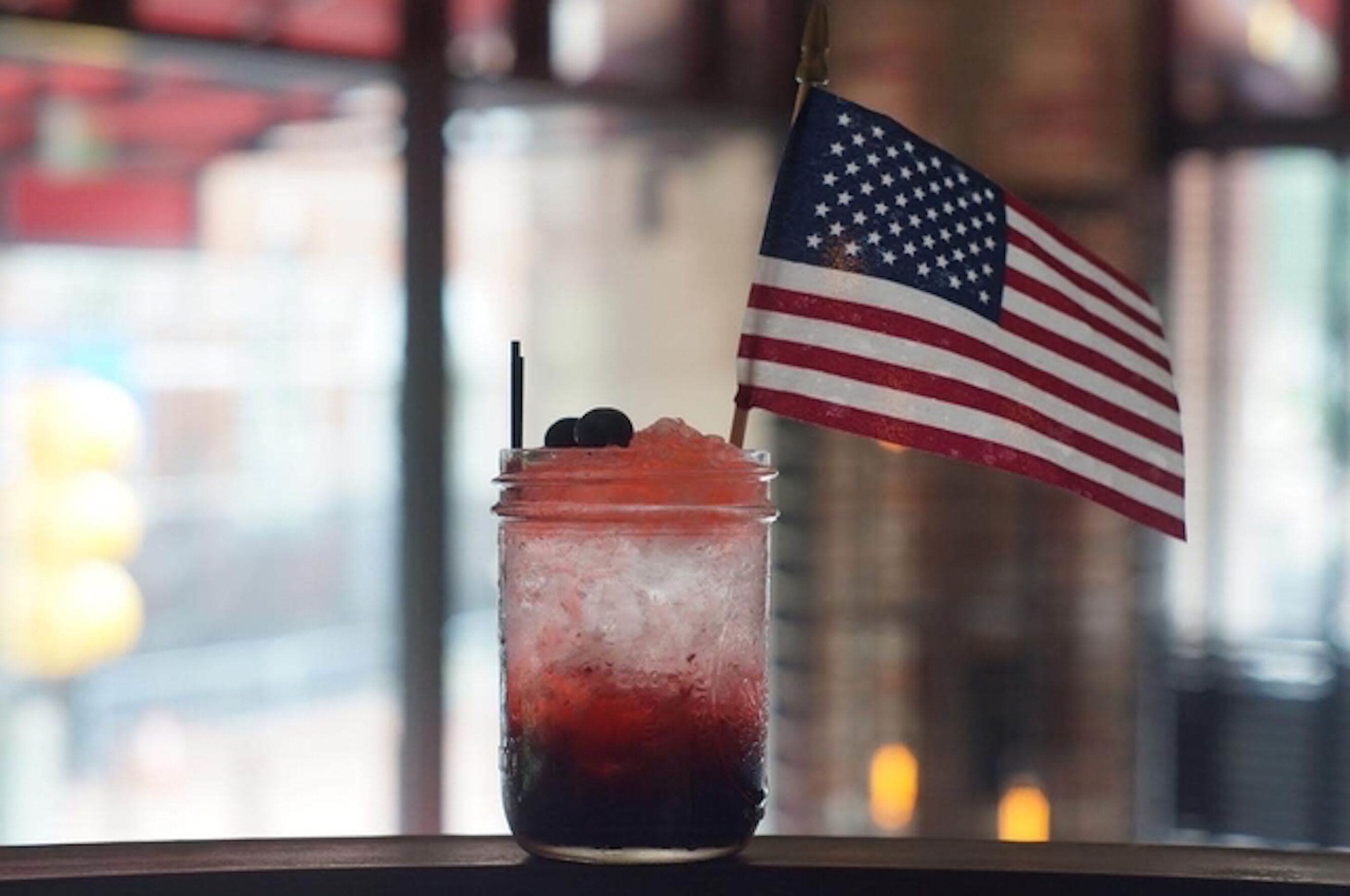 • The Bourse: The Bourse offers patriotic diners the choice of food and drinks from close to 30 vendors. Guests can take a break from their celebrations and the July heat in the coolest AC in town while enjoying a world of flavors for breakfast, lunch, and dinner in the shadows of history. Options for Independence Day imbibers include sipping on a frozen Gin and Tonic from Bluebird Distilling while enjoying bites from Rebel Taco, or enjoy a beer from Taps Fill Station while munching on a grilled cheese from Mighty Melt.

• Jet Wine Bar: Jet Wine Bar is kicking the summer off with a bang, with the grand opening of the Jet Wine Garden, a wine lover’s outdoor oasis, on Thursday, July 4 at 4 p.m. Adjacent to its brick and mortar location, Jet Wine Garden offers a diverse and affordable list of wines, beers, and cocktails as well as small bites, courtesy of new Culinary Director, Lucio Palazzo. Guests can celebrate the opening with a glass of wine and snack before heading to the Parkway for the annual July 4th concert and fireworks.

• Red Owl Tavern: Red Owl Tavern is paying homage to America’s history with a rum cocktail – America’s original craft spirit. Independence Jawn is a modern American craft cocktail, named in contemporary street vernacular, and is made with muddled blueberries, Demerara rum, White rum, Peychaud’s Bitters, and blueberries. Served in a Mason jar, this $10 red, white, and blue cocktail is available all day and is sure to make anyone feel patriotic

• Royal Boucherie: Old City’s lively American brasserie from award-winning chef Nicholas Elmi, is celebrating the birth of the nation with two of America’s favorite things: burgers and beers. For $20, guests can enjoy a Boucherie Burger paired with a draft beer of their choosing. Conveniently located on 2nd st, guests can take a short walk to Penn’s Landing after dinner to catch the Camden fireworks from across the Delaware River.

• The Twisted Tail: The Twisted Tail is just a few steps away from Penn’s Landing hotspots like Spruce Street Harbor Park, offers the ultimate location to enjoy a cocktail and bite before Camden’s Independence Day Festival fireworks — kicking off at 9:30 pm. Guests can enjoy an order of BBQ Smoked Ribs ($12) or the Fried Chicken ($19) before securing a first-row seat on the Delaware River. Guests looking for a tipple post-show can head to The Twisted Tail to toast to America’s birthday with a beer or cocktail.

Each Wednesday between the hours of 5 p.m. and 7 p.m., the areas of Avenue of the Arts, Center City East, Center City West, and Rittenhouse Square participate in Center City Sips. Over 80 participating locations have $6 cocktails, $5 wines, $4 beers, and appetizer discounts. Here are this week’s best deals. 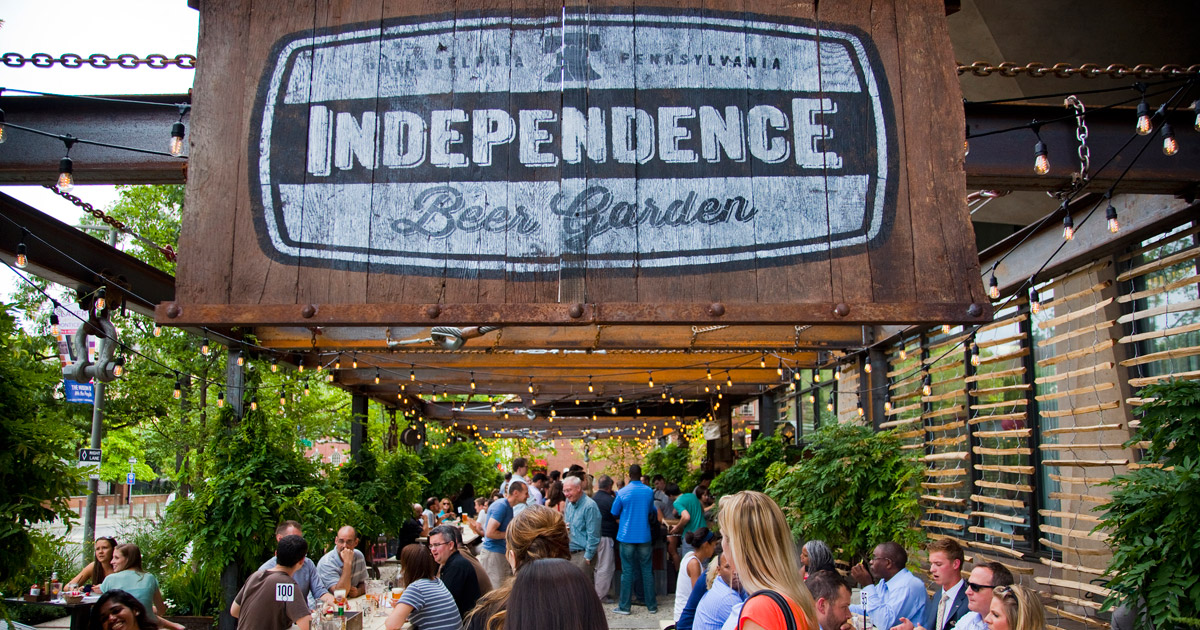 • Continental Midtown: Come get a joyful reprieve from the excitement of downtown at this tapas-style eatery. Candy Apple (FFEN green apple, cherry,  and lime), Sake It To Me (sake, oolong raspberry tea, orange liqueur, and lemon), The Astronaut (peach vodka,  and Tang), and other refreshing cocktails are discounted. Hummus and Pita, Steamed Edamame, Bavarian-Style Soft Pretzels, and Thai Chicken Skewers, and others are half-off.

• Independence Beer Garden: This buzzing beer garden always draws a crowd. The $6 Rose Garden (EFFEN rosé vodka, watermelon, and lime) will be a perfect libation on a great Wednesday evening. New Belgium Day Blazer is $4. Chardonnay, Cabernet Sauvignon, and Rosé are all $5.

Each Thursday between the hours of 5 p.m. and 8 p.m., Philadelphia participates in Old City Eats. Over 25 participating locations have half-priced appetizers, $4 beers, $5 cocktails, and other drink specials. 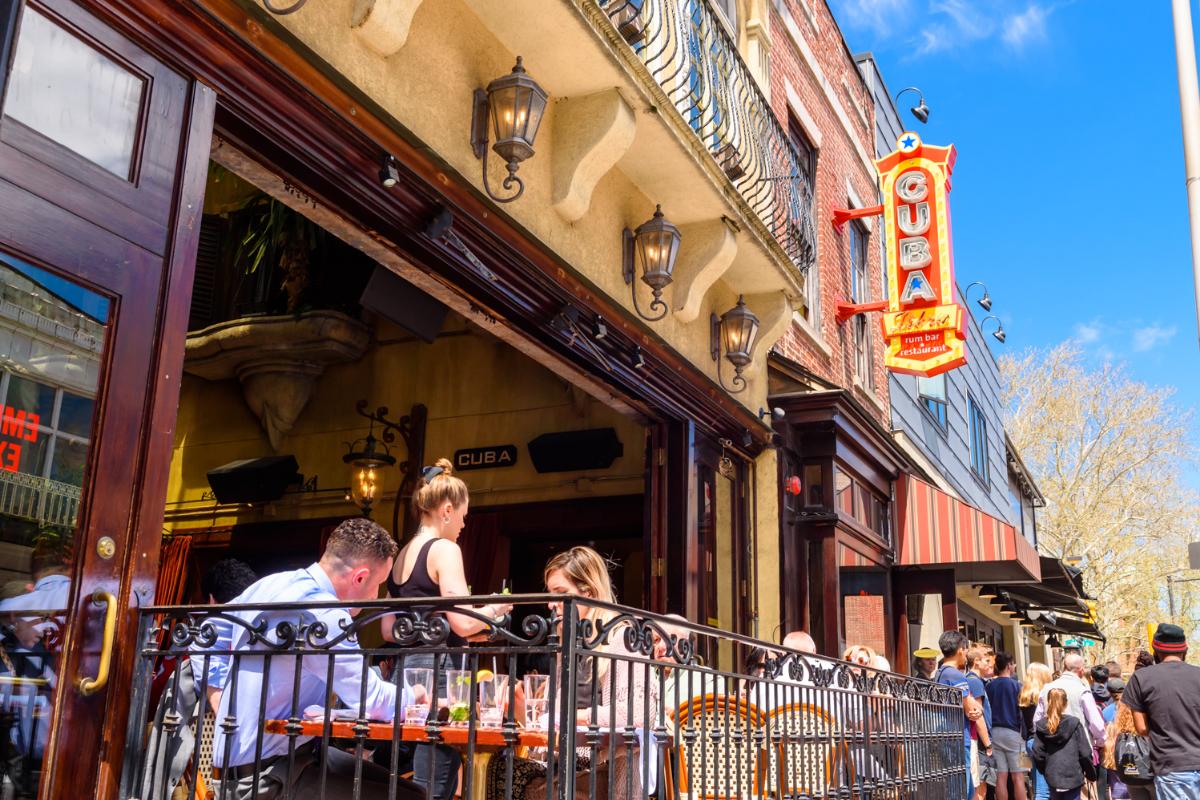 • Cuba Libre: The aromas wafting from Cuba Libre each day are delightfully entrancing. During Old City Eats, be sure to grab tropical chips and a trio of dips (plantain and malanga chips, black bean hummus, roasted cauliflower with curried onions hummus, and Cuba Libre salsa). Classic Daiquiris made with Bacardi 4 year, guarapo (fresh-pressed sugarcane), and fresh lime juice will be poured up all Thursday evening. 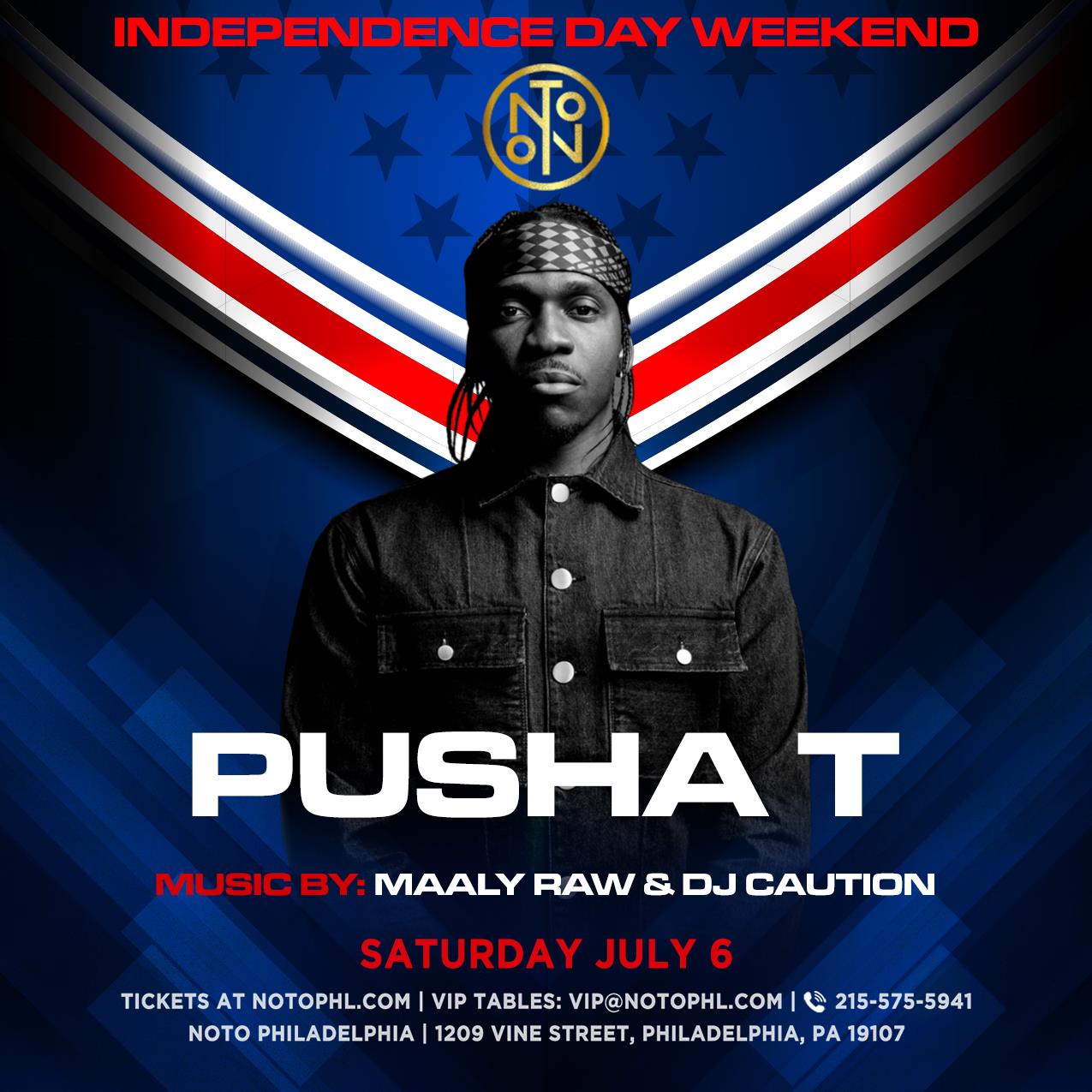 • Parks on Tap: Parks on Tap will be at  Shofuso Japanese House and Garden this week. The roaming beer garden will have local craft beers, food trucks, free yoga, and a Japanese star festival this Saturday and Sunday.

• U+Me+RNB: The Fillmore Philadelphia will be hosting a U+Me+RNB party this Wednesday night. The entertainment and music venue will be playing the best vibes in R&B all night long starting at 10 p.m.

• Holy Trinity Party: Holy Trinity Night is back this Friday night. The DJ will be playing the best tracks from hits from Beyoncé, Nicki Minaj, and Rihanna Young Money. You’ll hear their countless collaborations with other acts as well.

• Pusha T Blowout: Pusha T will be hosting an Independence Day Weekend party at NOTO Philadelphia this Saturday night. The famed rapper will be in the building as Maaly Raw & DJ Caution do live sets. This will be one of the blowout parties of the weekend.