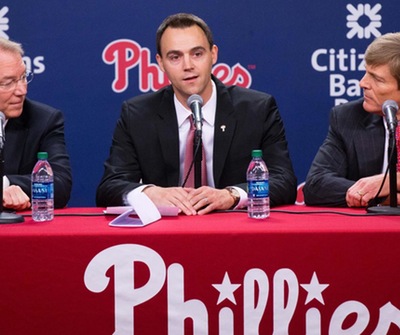 The euphoria of the Phillies’ big comeback win against the Dodgers Tuesday night could be gone by the time we all go to bed Wednesday night. But I’m just going to listen to Tom McCarthy’s and Scott Franzke’s call on Bryce Harper’s game-winning hit because it might just have been the best Phillies win of the season thus far.

According to The Athletic’s Matt Gelb, the Phillies signed general manager, Matt Klentak, and president of baseball operations, Andy MacPhail, to a pair of three-year extensions.

Klentak received a three-year contract extension, according to three sources familiar with the situation, that makes him the Phillies general manager through the 2022 season. The club never announced the deal, nor did it ever detail Klentak’s initial deal. According to a source, the original deal was for three years plus an option year; then, this spring, that option year — which covered the 2019 season — was renegotiated, and three years were added to it. MacPhail had signed a three-year deal that took him through 2018. The extension carries MacPhail through the 2021 season.

The timing of this news is interesting, and also is the fact that the Phillies never announced the extensions publicly. The entire front office has been on the hot seat, including manager Gabe Kapler, the last couple of months. The Phillies have went into a free-fall after being in first place earlier this season by as many as 4.5 games. Klentak had a very good off-season according to most experts, but didn’t foresee injuries as playing as big a role in this season. That’s where he came up short. The Phillies have no bench, no bullpen, and the starters haven’t been very good for the most part.

The extensions do give Klentak some time to improve the bench and the pitching on this team. But how much of it is coaching? Will Kapler really be sent packing after this season if the Phillies don’t make the playoffs? If Klentak doesn’t fix the glaring holes on this team, does he even deserve three more years?

I like continuity and not rapid change, but I’m still not convinced Klentak will be the general manager to get this team over the hump. But he did have a very good off-season this past year, so I’m willing to give him at least another year before I come to the conclusion whether he’s good for this team’s future or not.

Follow Nick Piccone on Twitter (@nickpiccone) and e-mail him at [email protected]. You can read his pro wrestling articles on PhillyVoice here.