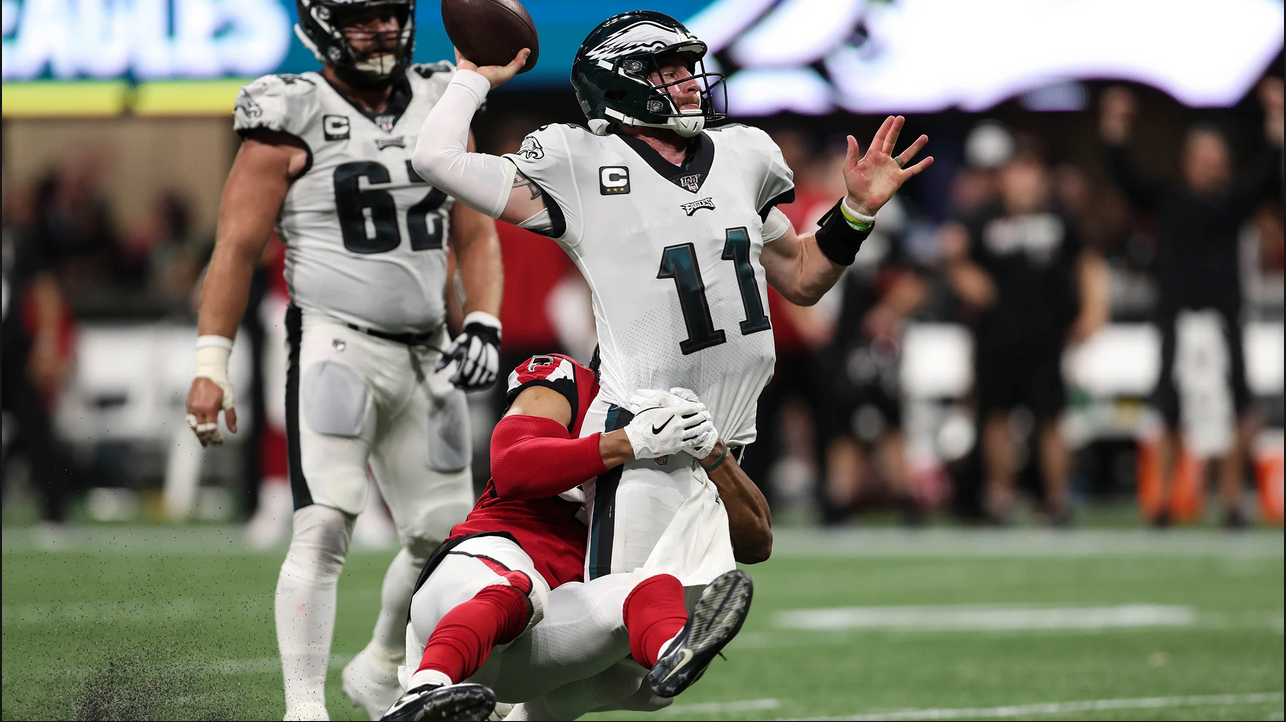 Nelson Agholor ran unabated down the left sideline and as Carson Wentz’s pass arrived, the ball sailed through his finger tips.

It would’ve been a go-ahead touchdown.

Instead the Philadelphia Eagles were faced with a 4th-and-8 later on in the climactic final drive and Zack Ertz couldn’t get to the sticks after making a turn upfield and attempting to stretch the ball past the marker.

That’s the way it was all night for the Eagles in their 24-20 loss to the Atlanta Falcons on Sunday.

Battered and bruised, Philadelphia suffered injuries to wide receivers Alshon Jeffery (calf) and DeSean Jackson (groin) and despite a rag-tag bunch that suddenly included Mack Hollins and J.J. Arcega-Whiteside, Wentz still nearly led them all the way back.

“Things just began to kind of snowball a little bit, but the fact that we hung in there and battled, gave ourselves a chance, we had the lead there late in the game,” Eagles head coach Doug Pederson said. “It’s really what these games come down to, it’s just a couple plays here and there that can go in your favor or the other way. Tonight, they went their way.”

And what about those injuries?

“We’ll check tomorrow, when we get back. It’s hard to comment on those injuries right now. Long-term, we don’t know.”

Agholor led the way with eight receptions for 107 yards and a score, but the drop will be what will be looked back upon.

I left plays out there that I know I could’ve made and will make going forward, tough loss that hurts a lot because I know how hard we played. I will be better and as a team we will be better moving forward.

It was a valiant effort, there might’ve even been some character built for Wentz as he played a clutch fourth quarter following a suspect first half.

The game flipped on Ronald Darby’s interception and as the Eagles were faced with a 4th-and-goal and staring at a 17-6 deficit, Doug Pederson opted to go for it and Wentz found Agholor in the back of the end zone to make it 17-12. Wentz dove just short of the goal line on the two-point conversion, there are those two words again.

The fourth quarter drive with 11:43 left was mesmerizing. Wentz was just 3-of-7 for 24 yards on third down before hitting Nelson Agholor on a 3rd-and-3 for a 16-yard gain. Next came a 3rd-and-6 where Wentz slid to his left before finding Hollins.

Then came the miraculous 3rd-and-9 conversion. Wentz stepped through pressure up the middle in the pocket and was just able to uncork a pass prior to his knee touching the ground and Hollins picked up 17 more yards.

The Eagles capped the lengthy 13-play, 73-yard march with Wentz’s quarterback sneak. It took 8:29 off the clock.

Left with 3:13, Atlanta struck quickly, with Julio Jones getting loose for a 54-yard touchdown on 4th-and-3 wide receiver screen. Jake Matthews did a great job of getting over to make the key block to help spring Jones free for a 24-20 Falcons lead with 2:10 to go.

Agholor did make a key play after his drop, hauling in a desperation heave downfield from Wentz on a 4th-and-14, setting up the Birds in the red zone following his 43-yard snag.

Wentz finished 25-of-43 for 231 yards with a touchdown and two first half interceptions. He was 6-of-16 for a measly 47 yards in the first half. It was the usual slow start for the Eagles, who were blanked in the opening frame for a second week in a row after finishing deal last in first quarter scoring (41) a year ago.

That needs to get cleared up as the season unfolds because if it does, the Eagles won’t have to worry about falling just short in the fourth quarter anymore.