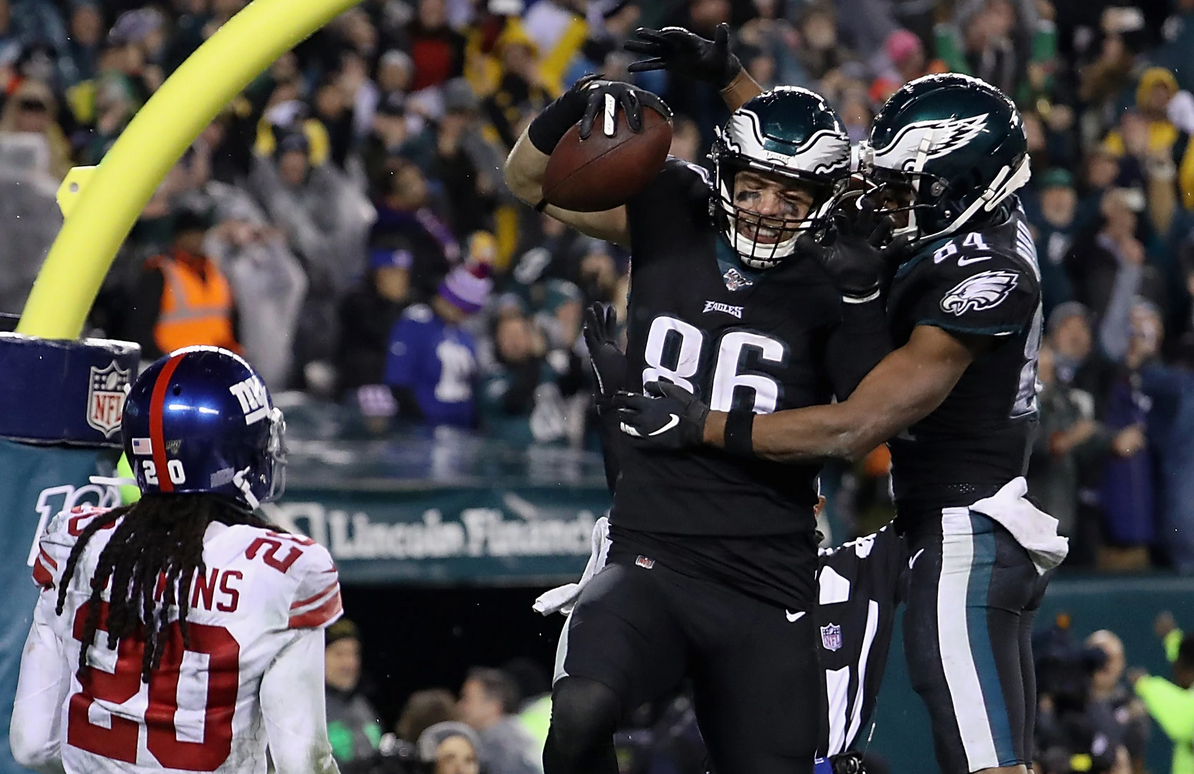 As the rain steadily pelted Lincoln Financial Field and the Philadelphia Eagles began to fall behind the New York Giants, the boos grew increasingly louder and by halftime part of the stadium cleared itself out.

Those people missed a heck of a fourth quarter and overtime.

As long as you were willing to brave Mother Nature.

Zach Ertz caught the game-tying, two-yard touchdown pass in regulation and then the two-yard game-winner in overtime to lift the Philadelphia Eagles to a 23-17 overtime comeback win over the New York Giants.

Philadelphia lost wide receiver Alshon Jeffery to a foot injury after the team had already been down to Jeffery, Greg Ward and J.J. Arcega-Whiteside at the position with Nelson Agholor unable to go with a knee injury. Eagles backup quarterback and 40-year-old Josh McCown would’ve been the next man up at wide receiver.

“Why can’t he? He’s active, he’s dressed,” Eagles head coach Doug Pederson said during his weekly appearance on 94.1 WIP on Tuesday. “He’s actually done that in a game before — in his career he has done that. Now, it has been about 10 years ago, but he has lined up as a receiver in an actual football game.”

It was actually 13 years ago in 2006 when McCown posted two catches for 15 yards as a member of the Detroit Lions squaring off with the New England Patriots.

Anyway, back to the comeback.

Carson Wentz was 33-of-50 for 325 yards and those two scores to Ertz. The key adjustment Pederson made was implementing Boston Scott into game. Miles Sanders averaged less than three yards per carry in the first half and Jay Ajayi registered five yards on a pair of runs, but Scott came in and gave the Birds a spark excelling not only as a runner but as a pass catcher as well. Scott carried the ball 10 times for 59 yards, while also accumulating six receptions for 69 yards. Ertz finished with nine receptions and 91 yards.

Eli Manning, who fell to 10-21 in his career against Philadelphia, tossed a pair of touchdown tosses to Darius Slayton in the opening 30 minutes, which helped vault New York into a 17-3 lead heading into the locker room. Slayton beat Ronald Darby deep twice for touchdowns of 55 and 35 yards, respectively.

The Eagles recorded five consecutive three-and-outs at one point before embarking on a trio of 10-plus play drives, two of them resulting into touchdowns.

Scott got the Eagles within a score late in the third quarter when he capped a 10-play, 58-yard march with a two-yard TD run.

After Jake Elliott missed a field goal on the Eagles’ ensuing touch, they went and found paydirt again, this time using 14 plays to travel 85 yards before Ertz finished it off with his TD catch.

Ertz comes up clutch when we need it most!#NYGvsPHI | #FlyEaglesFly pic.twitter.com/6gzw2L02Ni

Here’s the game-winner from Ertz.

While a loss against New York wouldn’t have ended the Eagles’ season, let’s face it the Rams are probably going to beat the Cowboys, it may have been a defeat the team wouldn’t have been able to bounce back from. But the way the Eagles fought and found a way to win this game with guys like Boston Scott, J.J. Arcega-Whiteside and Greg Ward making key contributions, it was big.

The NFC East is still there for the taking.