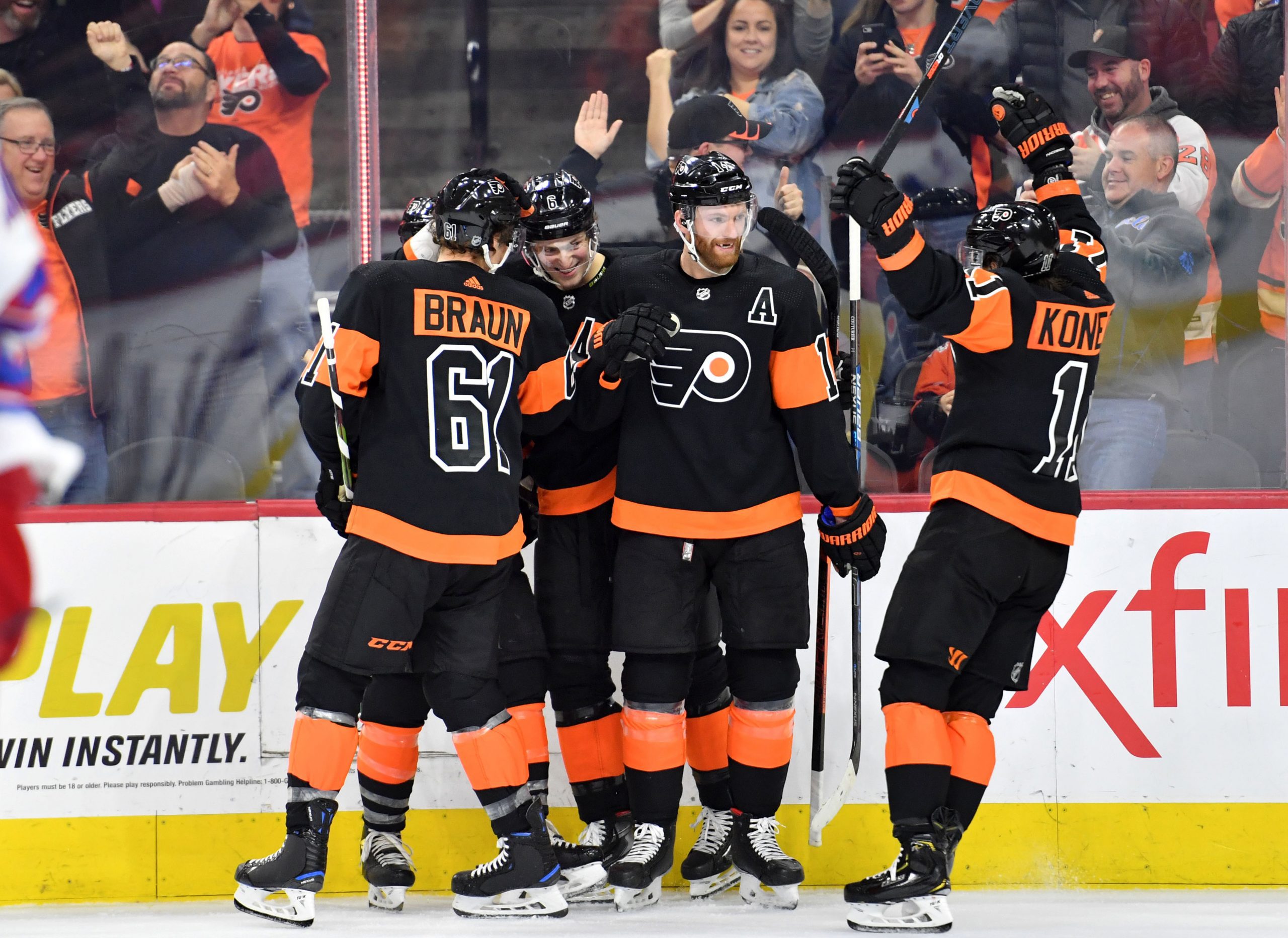 Two days after a disappointing home loss to the Montreal Canadiens, the Philadelphia Flyers avoided making the same mistakes against the Los Angeles Kings. Alain Vigneault’s team scored the first goal on Saturday at the Wells Fargo Center and eventually rolled past the visiting Kings to a 4-1 win.

Joel Farabee scored for the second-straight game, Travis Konecny recorded his second two-goal game of the season, and James van Riemsdyk tossed in a three point game. Brian Elliott returned in goal and made 34 saves, including three on the penalty kill to hand Philadelphia their 26th win of the season. It was a total team effort, now setting up a date with rivals Pittsburgh Penguins on Broad Street this Tuesday, the final game of the first-half of the NHL regular season.

“We didn’t play well [on Thursday],” Giroux said. “We didn’t play our game. It’s too bad because it is two points that we let go. But to be able to bounce back, it is huge and we have one more before the break here.”

“Yeah, absolutely [important to score first and not give it back],” Farabee said. “A couple of nights ago we scored first and gave it right back. I thought it was good we came out and sustained their push and went from there. Obviously, we have some things we need to clean up, but at the end of the day, that is a good win.”

Despite the Kings being the last place team in the Western Conference, they didn’t lay down against the Flyers on the road. However, they were caught sleeping on the Flyers first goal as van Riemsdyk set up Travis Konecny from point-blank range with 16:12 remaining in the opening period.

Konecny had to wait until early in the second period to score his second goal of the game, another wrist goal finish past Jonathan Campbell, but it gave the Flyers insurance. Farabee added to the lead late in the second as Matt Niskanen’s slap shot redirected off the young winger and past Campbell for his fifth goal of the season.

Dustin Brown pulled a goal back for the Kings just over five minutes into the third period, but van Riemsdyk killed any comeback hopes with a tip-in finish just over three minutes later. The Flyers hung on for a comfortable home victory, moving them level with the Columbus Blue Jackets in the Metropolitan Division.

“I think blocking shots and allowing me to see a lot of pucks, that was a big difference,” Elliott said [in comparison to the 5-3 loss to the Kings back on Dec. 31st]. “We were boxing out guys and it allows you to swallow up some of the rebounds that would normally be there and regroup and try to win the next face off and we did a really good job of that. Then we buried on our chances. Guys had some hot sticks tonight.”

Sitting 15 points higher in the league standings than the Kings, Saturday’s win may not look impressive, but it was a needed bounce back heading into the final game before the All-Star Break. Sidney Crosby, Evgeni Malkin and the Pittsburgh Penguins come to town on Tuesday, looking to earn their second win over the Flyers this season.

Even with Jake Guentzel out due to injury, the return of Crosby gives the Penguins their captain back and eager to impress in the second-half of the season. A win on Tuesday for Philly paired with other results could see them head into the break as one of the top three teams in the Metro.