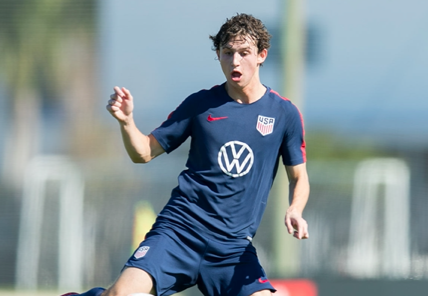 A youthful U.S. Men’s National Team is gearing up for its first competitive action of 2020. Philadelphia Union Homegrown midfielder and Medford, N.J. native Brenden Aaronson is one player seeking his senior debut for the Stars and Stripes this weekend.

Gregg Berhalter’s side squares off against Concacaf rivals Costa Rica on Saturday in Carson, Cali. in its first friendly of the new year. For Aaronson, January was his second camp with the USMNT and first since October. The opportunity to train with several other young and promising players throughout the month was one Aaronson has not taken for granted.

“It’s been a long camp, but a great one,” Aaronson said. “It’s been a lot of learning, getting really into my position and knowing what I have to do. It’s been a really good camp for me.”

“Coming in for three weeks and learning a system in an extended amount of time is really helpful. All of us will be going back with our club teams in the next week so you have to try and keep what you learned in camp fresh for the next time. It’s been really good to be here for three weeks.”

Aaronson broke into MLS in 2019 for the Union, totaling 30 appearances for the Eastern Conference side in all competitions. He scored three goals and registered two assists while starring in midfielder next to veterans Alejandro Bedoya and Haris Medunjanin.

He helped the Union to a first-ever playoff win in club history over the rival New York Red Bulls, saw them set numerous club records, and grew as a professional in his first season under Jim Curtin. Now with the opportunity ahead of him to make his first appearance for his country, Aaronson is hoping to make himself and his teammates proud.

“It would be a dream come true if I could get into the game for my debut,” Aaronson said. “There would definitely be a lot of emotion, but I’d stay cool and play my game.”

“Staying here for that long and being around Gregg and having him push you both offensively and defensively just gives you extra confidence. I feel confident and if I get into the game on Saturday, then I’m gonna take it for sure.”

With the January camp coming before the start of the 2020 MLS season, this opportunity allows Aaronson to soak invaluable experience with Berhalter and the rest of the coaching staff. Although only 19-years-old, Aaronson has proven that he can make an impact on the pitch and can be a consistent member with his club.

The Union kick off their regular season schedule on Feb. 29th at FC Dallas.