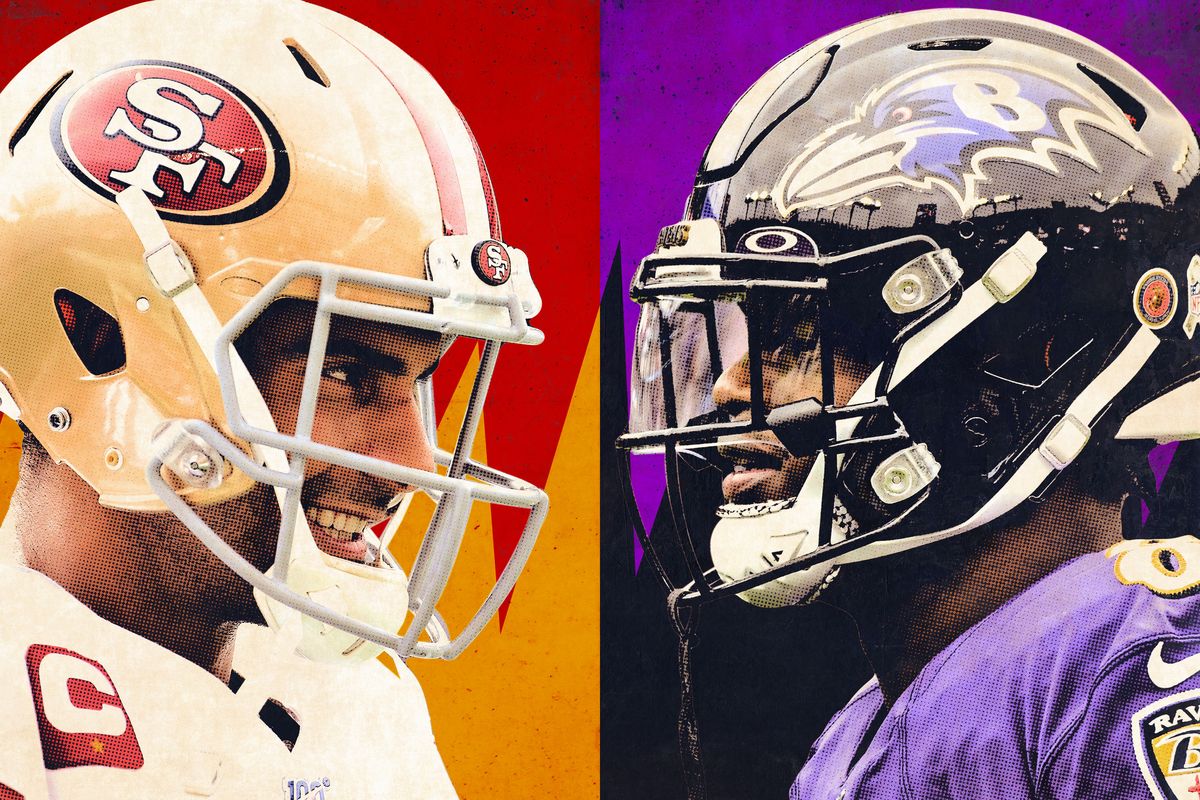 In the second installment of Futures Faceoff, I take a detailed approach to predict the probability of success between two of the NFL’s elite teams with the goal of identifying which is the better investment in the futures win total market. I will be looking at data from last season, offseason changes, expected strength of schedule, and much more as I attempt to uncover what factors will impact these teams’ ability to duplicate their 2019 season. Last week, I looked at the Browns and Vikings and discussed the impact of Kevin Stefanski. This week’s Futures Faceoff features the NFC Champion San Francisco 49ers and the most dominant team in the regular season, the Baltimore Ravens. Let’s find out which team is more deserving of our dollars!

There was not a bigger story in the regular season than the ascension of Lamar Jackson as an NFL passer. Jackson took a massive leap in his sophomore campaign racking up 43 total touchdowns. The MVP of the league and engineer of the NFL’s highest-scoring offense, Jackson led all QB’s with a 9% touchdown rate on his passes. Only Peyton Manning recorded a higher rate in a single season in NFL history. That’s how dominant the Ravens offense was in 2019. Here is the scary part: They should be even better in 2020.

Baltimore added dynamic running back J.K. Dobbins and Texas WR Devin Duvernay in the draft to an offense that already has first-rounder Hollywood Brown on the outside. Duvernay’s 4.39 speed from the slot should be a match-up nightmare for opposing defenses trying to leverage containment on the most dangerous mobile QB in the league. Having an explosive complement in Dobbins to running back Mark Ingram will exasperate defensive coordinators as they try to figure out how to stop a rushing attack that shredded them last season to the tune of 204 rushing yards per game.

Here’s what Devin Duvernay does. pic.twitter.com/JFQbNpirdo

Kyle Shanahan knows a thing or two about offense as well. The 49ers ran their way to the Super Bowl behind the trio of Raheem Mostert, Tevin Coleman, and Matt Breida. The Three Man Wrecking Crew is now a duo as Breida took his talents to South Beach in search of an increased role in Miami. The foundation of Shanahan’s scheme will continue to be the running game. The 49ers’ rushing attack ranked second in the NFL at 153 yards per game, only behind the aforementioned Ravens.

The 2020 version of the 49ers’ offense should feature a more dynamic passing attack to pair with its running game. San Francisco invested a first-round pick in Arizona St. wideout Brandon Aiyuk. Aiyuk’s speed and ability to create yards after the catch match perfectly with Shanahan’s scheme. Pairing Aiyuk and Deebo Samuel to complement George Kittle gives Jimmy Garoppolo the perfect set of weapons to take a big leap after his first full year running the 49ers’ offense. Addressing Joe Staley’s retirement with the acquisition of Trent Williams is another big win for Garoppolo. The 49ers’ ability to remain an elite team in the NFC will depend on how far Garoppolo can elevate his game.

The transformation of the Ravens’ defense last year was ignited by the acquisition of Marcus Peters and Jimmy Smith’s return from injury. A defense that ranked near the bottom of the league a quarter through the season ended up finishing top four in overall defensive DVOA. The Ravens’ defense did have a weakness, and it cost them their season – Derrick Henry bulldozed his way to 195 yards in the Titans’ upset win at Baltimore in the AFC Divisional Round Playoffs.

The Ravens did a masterful job this offseason in strengthening that weakness by trading for Pro Bowl defensive lineman Calais Campbell and drafting LSU’s linebacker Patrick Queen in the first round. Queen’s athleticism and instincts in coverage have Touchdown Wire’s Doug Farrar and Mark Schofield ranking him as one of the best scheme fits in the NFL Draft. The Ravens’ defense held opponents to 10 points or less three times in the last seven weeks of the regular season, while not allowing any team to score more than two touchdowns over the same period. The added explosiveness to the offense, coupled with a stout rushing defense, should have Marcus Peters and company in prime position to top last year’s 25 takeaways.

Shanahan isn’t the only coach in San Francisco that is garnering attention in league circles. Defensive coordinator Robert Saleh was a hot candidate for a few head coaching positions this off-season, mainly because of the sheer dominance of his 2019 defense. Saleh’s defense was ranked No. 2 in overall defensive DVOA and their front four, led by rookie Defensive Player of the Year Nick Bosa, excelled on third downs, stifling offenses 67% of the time. The 49ers return 10 of 11 starters on defense, but the starter missing is a significant piece of their front four. San Francisco swapped DeForest Buckner for rookie Javon Kinlaw, and it’s fair to question how much Buckner’s absence will impact the defense as a whole. It was a bold move by general manager John Lynch to disrupt a pass rush that was the driving force of their Super Bowl run.

The 49ers were the NFL’s best worst-to-first story. Fresh off a 4-12 season, they transformed into the NFC Champions the very next year. There were plenty of factors at play in the transformation of the 49ers, but the 2019 schedule helped a team coming off a 4-12 season build confidence. San Francisco faced the Bucs and Bengals in the first two weeks, and the Browns, Redskins, and Panthers in the next five weeks. They are blessed with another favorable September in 2020, catching Arizona, Jets, and Giants in the first three weeks. Then reality hits as they face the Patriots, Seahawks, Saints, Rams, and Cowboys all on the road. It’s much easier to be the hunter than the hunted. Now, Garoppolo finds out exactly what Tom Brady dealt with year after year: expectations.

The rich get richer. It’s a popular phrase heard around NFL Draft, but we can definitely apply it to the Ravens’ 2020 schedule to highlight the flaws of the league’s ineffectiveness in minimizing scheduling advantages. The NFL uses the previous season’s respective records as the factor in determining the strength of schedule. Warren Sharp’s strength of schedule rankings are based on 2020 expected win totals set by the Vegas bookmakers. The 14-2 Ravens have the fourth easiest overall schedule in the NFL and the third easiest in terms of opponent’s defensive efficiency. Their only back-to-back road trip is off a bye week, and their short-week opponents after their two Monday Night Football games are Washington and Jacksonville. If you enjoyed The Lamar Jackson Show last season, get ready for the sequel.

Can the 49ers repeat as NFC West champs?

The Ravens and 49ers were my two of my favorite teams to watch in 2020 and I expect both teams to be back in the postseason. However, this wager is not about making the playoffs. The fundamental question we have to ask ourselves when evaluating the 2020 49ers is what should be the expected probability that they can duplicate their success last season?

This is a 49ers team that was very deserving to be the NFC Champions. They were also a few inches away from giving up the division to the Seattle Seahawks and winding up without any home playoff games. If that Week 17 game was played ten times, how many times would the 49ers have stopped Russell Wilson?

There are other factors we have to consider with San Francisco.  Will the dreaded Super Bowl hangover impact them more since the off-season programs are shortened? It’s very possible that the defense takes a small step back without Buckner. If the running game doesn’t have the depth without Breida, Garoppolo is going to be asked to do much more. Whether he can deliver under those circumstances is a legitimate question.

The 49ers are -106 favorites to win the NFC West, which yields a 50% implied probability while Wilson’s Seahawks are +225. The 30.77% implied probability for Seattle feels low; I think the gap between the 49ers and Seahawks is much closer. Wilson is coming off the best season of his career and Metcalf should be much more comfortable in his second year. Seattle was one yard away from being the No.1 seed in the NFC, and the division as a whole is much improved if Arizona progresses as expected. I’m not comfortable the 49ers are going to repeat as NFC West champions, and I think they are closer to a 10-6 team than an 11-5 one.

If you are waiting for the league to catch up to Lamar Jackson, it’s going to be a long season. Jackson’s development from year one to year two was nothing short of remarkable. Lamar’s dual-threat skill set overshadows his growth as a pocket passer. Jackson lit up the NFL in 2019 with only two players on offense recording over 350 yards receiving on the season. Now insert JK Dobbins. Put him on the field with Hollywood Brown and Devin Duvernay on the outside and watch the laser show. The Ravens have one of the best front offices in football and have done a tremendous job surrounding him with even more weapons this season. More importantly, they greatly improved a defense that allowed the third least amount of points in 2019.

Eleven wins is a big number. In order to win the wager, Baltimore has to be at least 12-4. Last year, there were six NFL teams that won 12 games or more, but only nine over the previous two seasons. At a five per year average, I am confident betting on Baltimore being a top five team this season. The 2020 Ravens are significantly improved on both sides of the ball, have a very favorable schedule, and we are able to win the wager even if they lose two more games than last season.

Is there a possibility that the Titans’ game plan of keeping Jackson moving horizontally will be his kryptonite in 2020? There is always a chance but as pointed out in this article by Steven Ruiz, Jackson showcased elite level passing traits in defeat. If Jackson continues on his rapid developmental curve, I’m more than confident John Harbaugh has the innovative Greg Roman scheming up his next chess move. The Titans’ loss works more as a positive than a concern in my handicap for Baltimore, as I like my money on a motivated group. Give me Lamar Jackson with a chip on his shoulder surrounded by one of the best overall rosters in the NFL. Take Baltimore to the bank!

Lamar Jackson has been ELITE as a passer inside the pocket 🎯 pic.twitter.com/XpdtndWLc1