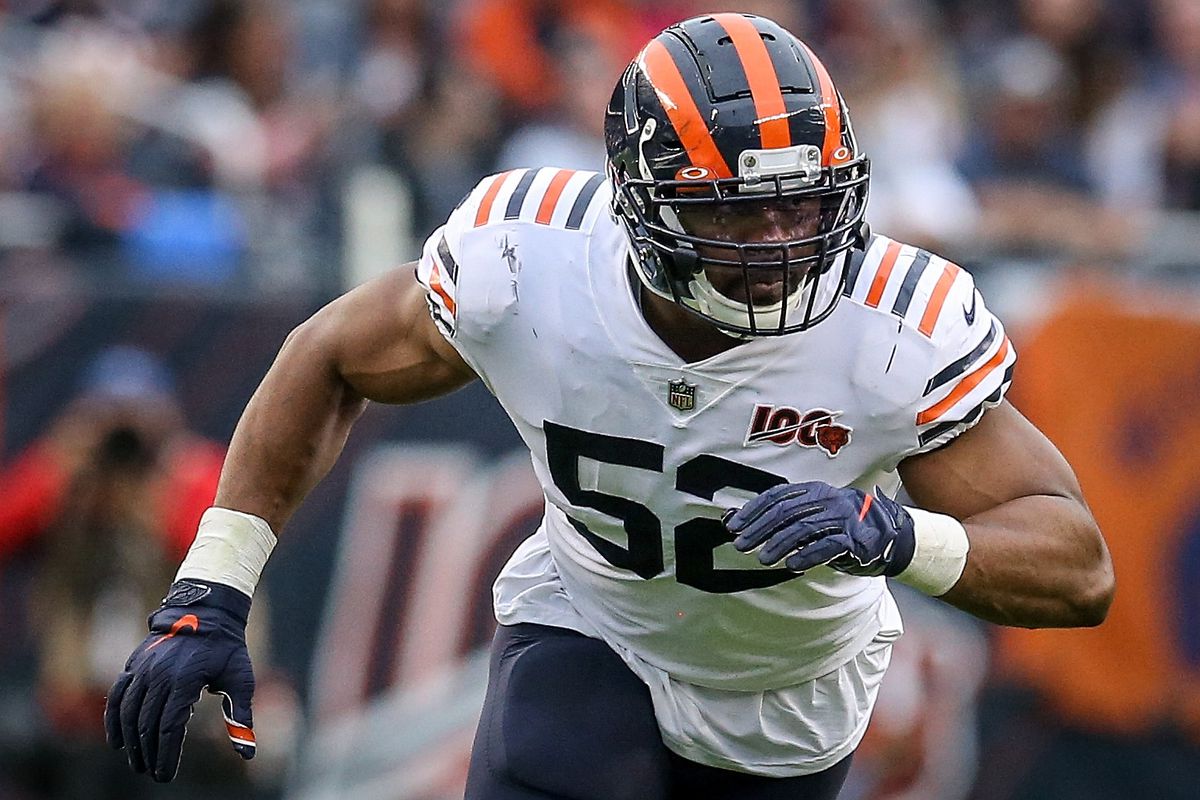 In this week’s installment of Futures Faceoff, I’m going to take a hard look at two teams in very similar positions: the Atlanta Falcons and Chicago Bears. Both teams are looking to rebound in 2020 behind head coaches that could find themselves in the hot seat with another losing season.

Dan Quinn led the Falcons to the Super Bowl in 2016-17, only his second year as head coach. After two consecutive 7-9 seasons, there are legitimate questions surrounding Quinn and whether the Falcons’ Super Bowl run was a product of offensive coordinator Kyle Shanahan’s performance. Quinn was able to salvage last season after a dismal 1-7 start, but a third straight losing season could make 2020 his last in Atlanta.

Bears head coach Matt Nagy is very aware of the roller coaster ride that the National Football League can be at times. Nagy has a 20-12 record in two seasons, but a combination of failing to meet expectations last season, and the lack of development of quarterback Mitch Trubisky has Nagy under pressure. For Nagy, 2020 is very much a prove-it year.

In this column, I’ll analyze both teams, dig into the stats on both sides of the ball, and evaluate everything from the coaching staff to the strength of schedule to see what’s in store for 2020. The goal is to determine which team is the better investment, based on the current odds, in the NFL futures win total market. Let’s see what’s really happening in Hotlanta and the Windy City and make a sound decision on whether the Falcons or Bears are the best bet to earn us some bread!

The Falcons’ offense was much better for fantasy football than real football. Atlanta’s offensive stats give the impression of a team that uses Julio Jones and Calvin Ridley to put teams on their heels early and doesn’t get enough support from the other side of the ball. That’s not necessarily the case. Atlanta’s 2019 offensive stats are a result of consistently playing from behind, and Matt Ryan throwing into passive defenses playing with a lead. Atlanta was 13th in scoring but only averaged 9.9 points in the first half of games – 24th in the NFL. They were also 30th in the league in rushing attempts per game, which signals that they were down early and often. They picked up ex-Rams running back Todd Gurley in hopes of improving on their 30th ranked rushing attack, recognizing a balance to the offense will be critical to their success.

Trubisky was the story of the Bears’ offense in 2019. Whether he ever will be again seems unlikely. The former second overall pick cemented himself as one of the Bears’ biggest draft busts in history after an absolutely woeful season. There are times where “surface stats” such as team scoring do not tell the whole story. That is not the case with the 29th ranked Bears. Chicago ranked in the bottom five of almost every offensive category, including offensive DVOA, and only the Jets ranked lower in yards per play.

The Bears traded for Jaguars quarterback Nick Foles, framing the move as competition for Trubisky. Nagy proceeded to surround Foles with familiar faces, including quarterbacks coach John DeFilippo and offensive coordinator Bill Lazor. Both coaches worked with Foles in the same capacity with the Eagles, including DeFilippo’s run with Foles that resulted in him taking home the Super Bowl LII MVP. The quarterback position is the only significant change for the Bears on offense, and it’s clear they are building a staff to give their newest quarterback the best possible shot at success.

Nagy is looking to erase Trubisky from the memory of the Chicago fanbase, who are constantly tortured by Ryan Pace’s decision to select him over Patrick Mahomes. Foles has performed miracles in the past, but this might be too big of a task for St. Nick.

The Falcons let the league know defense was a priority heading into April’s draft. In 2019, they ranked 31st in the NFL in first-half points allowed, consistently letting games get out of reach early. Historically, NFL teams win at approximately a 75-80% clip when winning at halftime.  After releasing Desmond Trufant, the Falcons found themselves in the middle of every trade rumor involving a top 10 pick. It was clear they were after the best cornerbacks the draft had to offer. General manager Thomas Dimitroff couldn’t get a deal done, and instead of obtaining a top cornerback that could step right in, the Falcons reached for Clemson CB A.J. Terrell. The secondary is even more of a question heading in 2020. They swapped out DE Vic Beasley for Dante Fowler Jr. in free agency and selected Alabama DL Marlon Davidson in the second round. Quinn will need an improved defensive line to be the strength of this unit, but it’s hard to see this secondary standing much of a chance in a division with Tom Brady and Drew Brees.

The Bears had the most feared defense in the NFL two seasons ago. After defensive coordinator Vic Fangio departed to take the lead for the Denver Broncos, many expected a dropoff last season under Chuck Pagano. That dropoff was minimal, as the Bears defense carried a 29th ranked offense to a respectable 8-8 record. Pagano’s unit ranked in the top six in yards per play allowed and only three teams in the NFL gave up fewer points. The most significant variance between Pagano’s and Fangio’s defenses were takeaways and strength of schedule. The Bears dropped from having the most takeaways in the NFL to 22nd last season, but also faced the most difficult schedule in the NFL in regards to offensive efficiency, compared to 23rd easiest in 2018.

Overall, the transition to Pagano was a success and I expect this defense to continue to function as the backbone of the Bears in 2020. Getting Akiem Hicks and Roquan Smith back healthy will pay huge dividends, and the off-season signing of Robert Quinn should free up Khalil Mack from the multiple double and triple teams he faced last season. A motivated Mack and a Bears defense that isn’t continuously put in a bad position by an inept offense could easily return to the top of the league.

This may be the biggest differentiator between the Falcons and the Bears. For this series, I utilize Sharp Football’s strength of schedule which is formulated from each team’s 2020 forecasted win totals rather than the 2019 standings. This gives us a more updated look at the difficulty of opponents since NFL teams experience so much roster turnover per year.

Here comes the bad news Falcons fans – Atlanta has the most difficult schedule in the NFL based on their opponents’ forecasted win totals. It starts with the NFC South, as the Tampa Bay Buccaneers are poised to be greatly improved and Carolina under Matt Rhule won’t be the easy out they were last year. Quinn was on shaky ground after a 1-7 start last season, and it’s going to be a challenge getting off to a fast start this year.

After kicking off the season against the Seahawks, Alanta has its first two road games at Dallas and Green Bay. Don’t count on Quinn resurrecting the season if they get off to another slow start since five of their final seven games are versus the Saints (twice), Buccaneers (twice), and Chiefs. If the Falcons are on wobbly legs heading into their bye week, Arthur Blank might as well throw in the towel on his head coach.

The Bears’ schedule fits right into their team needs heading into a pivotal year for Nagy. The offense will face favorable secondaries – Lions, Giants, and Falcons – to start the season. The three teams finished 25th, 29th and 31st in defensive passing DVOA last season, respectively. It’s the perfect setup for an offense with a new quarterback to gain confidence. Overall, the Bears have the sixth easiest schedule in the NFL in 2020, a welcome change for a team that went 6-3 against teams that failed to make the postseason last year.

The Bears will claw their way into the money

The bigger the Bear, the harder they fall. Coming off a 12-4 season and numerous awards in 2018, the Bears were one of the biggest disappointments in 2019. The offense was one of the league’s worst, and the former coach of the year ungracefully plunged into a sophomore slump. Trubisky was a bust while Mahomes hoisted the Lombardi Trophy. Chicago was a lot of things last season, but it’s important to remember they were not a losing team. Despite the coach struggling, the young quarterback busting with the offense, and the tough schedule, they won eight games.

Nagy’s offense should be at least average under Foles. Let’s face it, that’s typically what you get with Foles – an average quarterback with great leadership skills who can play under pressure. I personally like Foles’ fit with the offense and have a high level of confidence they will be improved this season. All signals coming from Chicago indicate that Nagy will prioritize the screen game with Tarik Cohen, a staple of Foles’ success with the Eagles. Foles’ willingness to get the ball out quickly and let his receivers make plays should maximize the strengths of Allen Robinson and Anthony Miller. The key here is that we don’t need Foles to save the Bears. If the Nagy-Foles marriage is able to produce average results, the Bears’ defense will do their part to drag them over seven wins, which wins the wager.

The odds and why they point to Chicago

The Falcons and Bears have the same 7.5 win total partially because a key influence in determining the number is a team’s point differential. Atlanta and Chicago both finished 2019 with the exact same point differential (-18). While both head coaches are on the hot seat, it’s the Falcons’ Quinn that I see succumbing to an inevitable losing season in Atlanta.

The market is offering the Falcons at plus money (+107) to go over the 7.5 wins, which signals the market is pulling in the opposite direction. We reviewed the importance of the Falcons getting off to a better start in 2020 in order to avoid another losing season. I’m skeptical Gurley will make a significant impact on their 30th ranked rushing attack. More importantly, the front office failed to make the necessary improvements in the secondary to give the defense a chance to be competitive against the elite offenses it will face in its own division. Your money is better spent betting on Quinn to be the first coach fired than the Falcons to win over 7.5 games.

Chicago is the stronger play to win more than seven games. Getting the Bears at the current odds -115 is very good value considering that they are coming off a season where they grossly underachieved and still posted eight wins. The odds at -115 will return 86.96% of your wager with an implied probability of slightly over 53%. Sounds very attractive for a team that’s likely to improve on both sides of ball against a less competitive schedule. As with Quinn, it’s imperative for Nagy to have success early because that early confidence snowballing is a reality in the NFL. The Bears starting the season with three winnable games against teams with a combined 2019 record of 14-33-1 is a significant advantage. Historically, 75% of teams that start the season with three straight victories make the playoffs. I am not entirely sold on Nagy, but the Bears can take advantage of a down year in the NFC North. There are enough factors here to make a strong investment against the Bears regressing in 2020. I am going to put the “win” back in the Windy City for over 7.5 games!