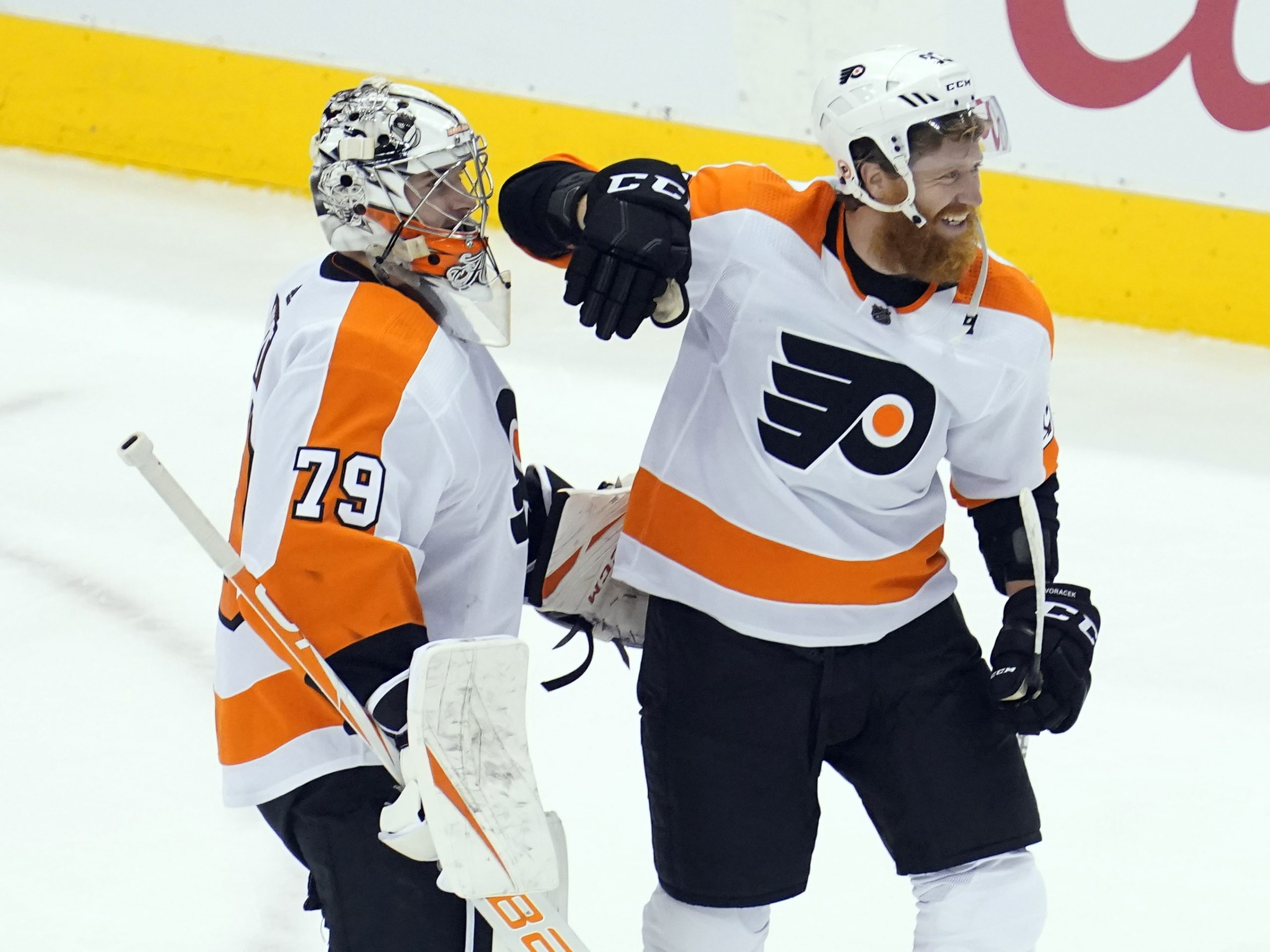 Carter Hart’s growth from his first and second NHL seasons is a major reason for Philadelphia Flyers fans together excited and the best part is he has an even higher ceiling to get to going forward.

Hart took major strides in 2019-20 for the Flyers, helping them reach the playoffs, grab the No. 1 seed and make it to the second round in Alain Vigneault’s first season in charge. The young Canadian goaltender played in 26 more games than his rookie season, trimming his GAA (goals against average) by close to 0.50 less and claiming 17 more combined wins.

Despite the Flyers being eliminated at the hands of rivals New York Islanders, Hart did everything he could to keep the Orange and Black alive and even set some records along the way. His hard work and determination heading into 2021 is something that has both Kevin Hayes and Vigneault excited for what’s to come.

“Yeah, he’s an impressive kid,” Hayes said about Hart. “He works really hard. He’s very determined to be an elite goalie in this league. Some would argue that he already is. I think he’s one of the best guys in the league. To see him on an everyday basis, on the ice and off the ice, it’s nice to see a 22 year-old kid put in the work. It’s no secret to why he’s so successful as he is. He’s probably entered this league a little nervous and now he’s calm and collected.”

“He hasn’t really gone away from what got him to be a great goalie. He still puts in the work. He works with the goalie coach. He lets Moose help him out. It’s great as a player when you know both your goalies are trying really hard and putting the work in. You respect them for it and makes you want to work harder for them.”

While the entire team struggled in Hart’s first season, the 22-year-old Alberta native learned valuable lessons and continued to work with veteran teammate Brian Elliott in goal. He raised his game to new heights last season, stealing many victories for the Flyers and also keeping them as a contender to win the Stanley Cup.

Hart is no longer a secret in the NHL after his success last season and will now find more and more teams studying tape on how to beat him. Many tried to do that in 2019-20 and still couldn’t find a way to beat him as Hart registered three total shutouts and had a save percentage of .914% in the regular season before improving to .927 in the playoffs.

Hart has everything in his power to become a full-blown star in 2021 as the Flyers remain a top ten favorite to bring home Lord Stanley’s Cup.

“I will tell you after talking to him that that is his goal,” Vigneault said about Hart’s quest to making 2021 his breakout year. “It is also our goal as an organization. He is very demanding on himself and really pushes himself on and off the ice and the mental preparation that goes into that position. He is putting all the time in to become the best goaltender he can be.”

“I believe in Kim, our goaltender coach, also believes that he can be one of the top goaltenders in the league. He will have an opportunity to prove it. We need him to prove it. If we are going to be a Stanley Cup contending team, we are no different than anyone else, we need top goaltending, elite goaltending and we think Carter can do that for us.”

With the 2021 regular season reduced to 56 games though, Hart’s role may be altered due to the thick and fast schedule. Elliott is a capable goaltender as well and is likely going to be used as much as Hart during the regular season, in order to avoid any injuries and to also keep things fresh.

Vigneault is aiming to monitor the goaltender situation going forward in hopes of keeping his team in the mix for a playoff berth and injury-free.

“The schedule is condensed. Our back to back number is fairly good with eight back to backs. But it is something, depending on the work load and results that we are getting from our conditioning guys as far as science and where the players are, we are going to make different decisions on different guys at different times.”