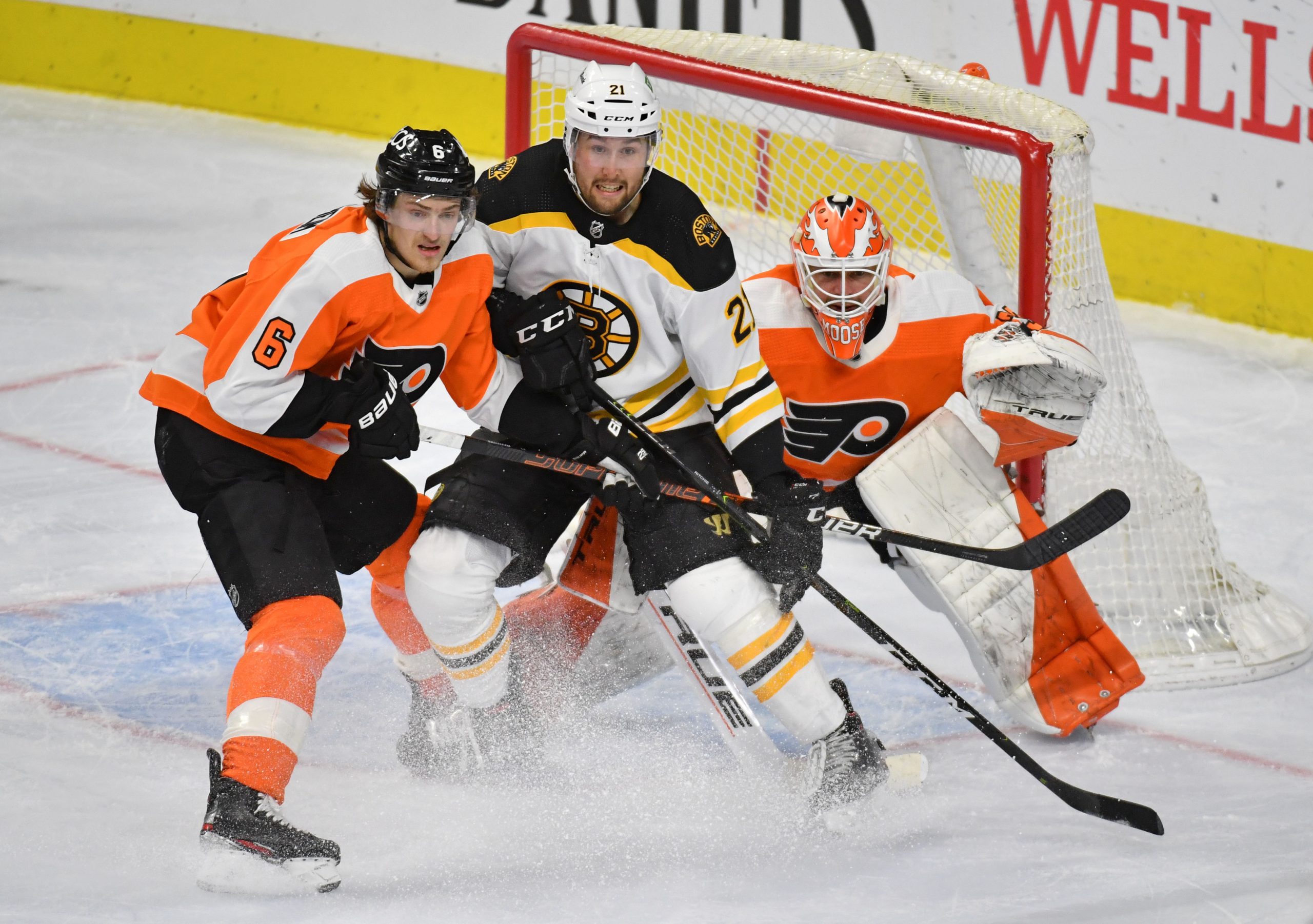 Brad Marchand and Sean Kiraly scored 0:27 apart in the third period to had the Bruins a 2-1 victory. It was their second-straight against the Flyers in Philadelphia and their fourth overall against the Orange and Black this season.

After seeing a two-goal lead slip away on Wednesday, the Flyers did better defensively for the first 40 minutes of Friday’s affair. They held the Bruins’ top offensive line of David Pastrnak, Marchand, and Patrice Bergeron in check, but were also held without a goal over that same span.

James Van Riemsdyk continued his career-best start to the season with his sixth goal of the campaign. Erik Gustafsson’s wrist shot from the top of the Bruins offensive zone was tipped home by Van Riemsdyk, 0:27 into the final period of regulation.

However, the Flyers would once again see their defensive inconsistencies come back to haunt them in the final stages of the game. Marchand would equalize for the Bruins thanks to sheer hard work in front of Brian Elliott’s goal, jamming home a loose puck with 7:59 to play. Pastrnak’s slap shot was not saved cleanly by Elliott, allowing the veteran center to score.

“I think they’re a good team, but tonight’s scenario is different than the last scenario,” Flyers head coach Alain Vigneault said. “There’s no doubt that they’re a good team. They got a top line that seems to make a difference every night and they did again tonight.”

“Again, tonight was a way different scenario than the last game. You got to give the opposition credit. They’re one of the best teams in the league. They’ve got that top line that’s playing extremely well right now. In my mind, they were the difference tonight. That faceoff goal that they scored. They out-muscled us to the front of our net. They won that battle and they were able to put that puck in the net. I liked the way we played. I liked the way we competed. I didn’t like the final result, but for the most part, I liked our 5-on-5 game tonight.”

Off the ensuing puck restart, the Bruins took a lead they wouldn’t relinquish. On a 3-on-2 break, Kiraly ripped a wrist shot from the left side of the zone, which beat Elliott and rang in off the post. It was Kiraly’s second goal of the season, and it pulled to be the winner for Bruce Cassidy’s team.

The Flyers would suffer their third loss of the season in regulation, falling to second in the East Division behind Boston in the standings. Despite outshooting the Bruins by one shot, the Flyers next travel to D.C. on Sunday to face the Washington Capitals for the first time in 2021.

“I think especially these last two games than when we played them up in Boston,” Van Riemsdyk said. “I thought we did a lot good things tonight as far as 5-on-5 play and that’s churning in a good direction. They’re a good team. It’s obviously positive when you go in these games, we seem to rise to the occasion in these games. We just have to find a better result and close them out now.”