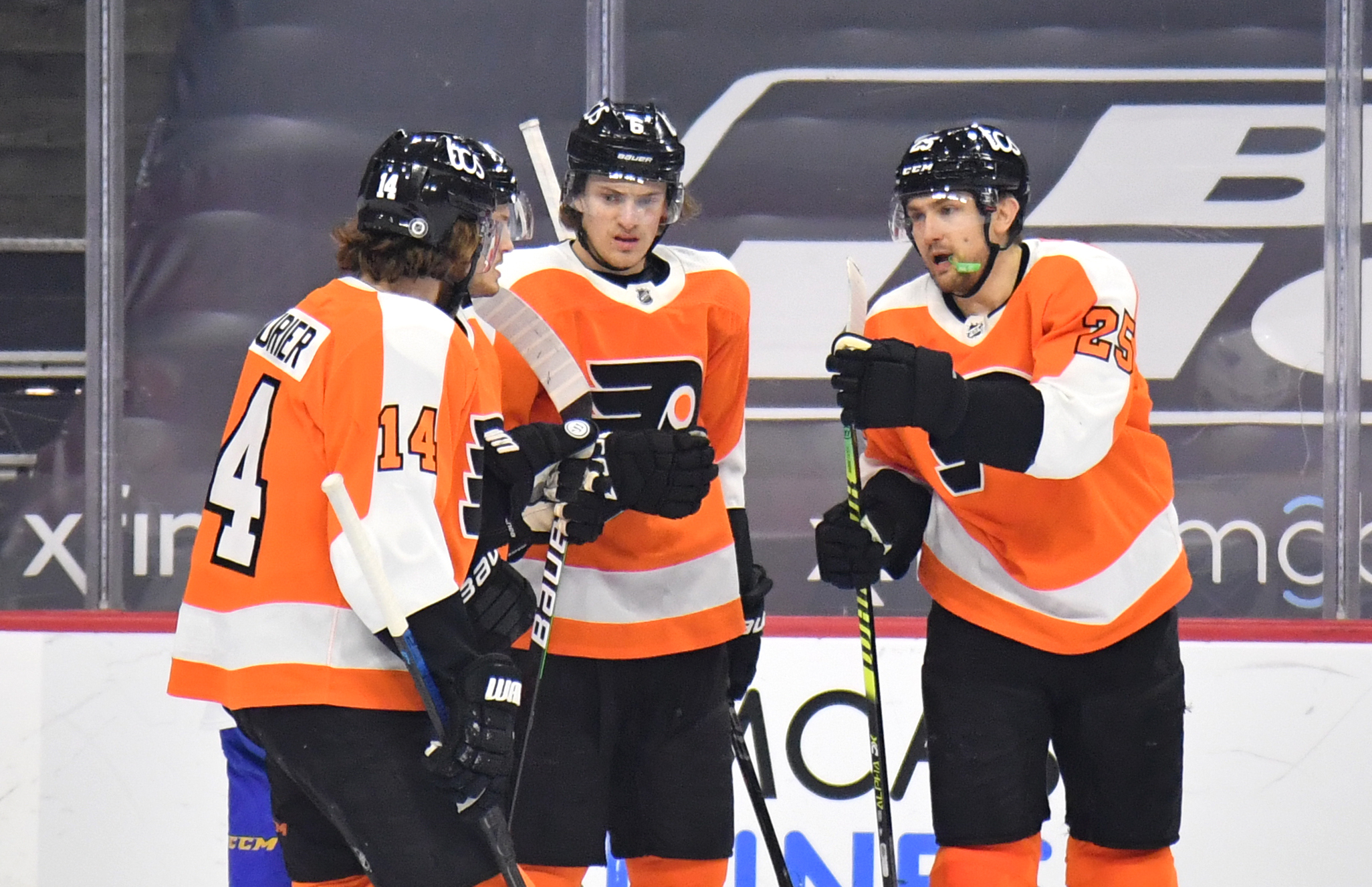 The Philadelphia Flyers were staring a humiliating defeat in the face after the opening 20 minutes at the Wells Fargo Center Tuesday night, but gritted their way back to earn two points at home.

Sean Couturier and Nolan Patrick each scored in the shootout while Brian Elliott made 12 saves in relief as the Flyers won 5-4 over the Buffalo Sabres. It was an important home victory for the Flyers, who snapped a two-game losing streak in the process and stayed in the conversation for a playoff spot in the East Division.

It was the Flyers who struck 1:58 into the opening period as Joel Farabee set up James Van Riemsdyk for the opening goal. Van Riemsdyk scored from point-blank range for his 11th goal of the 2021 season.

However, the Sabres would answer back in a big way without their star forward Jack Eichel. Sam Reinart was left open to roof a shot over the stick of Carter Hart for his first of two in the opening period.

Riley Sheahan made it 2-1 Buffalo not long after, before Reinhart was left open again to extend the Sabres advantage to two goals heading into the first intermission.

Hart was replaced by Brian Elliott for the start of the second period, with no news being released on why his night was cut short. Kevin Hayes snapped his lengthy goal less streak by registering his ninth tally of the season, cutting the deficit to 3-2, 2:58 into the period. A great bit of skill from Scott Laughton allowed Hayes for a simple finish in front of goal.

Brandon Montour had the pick of the litter among the goals, roofing a wrist shot over the shoulder of Elliott and in for his first goal of the season. It was a confident finish from Montour, who made the most of a tight angle along the left boards.

Two Flyers veterans connected to keep the comeback alive as Jakub Voracek’s 501st career assist was put away by Claude Giroux with under five minutes to play in the period. Giroux muscled his way in front of Jonas Johansson before lifting a tip-in over the goalie and in.

The Flyers continued fighting for a tying goal as things moved to the third period and Shayne Gostisbehere came up clutch for Alain Vigneault’s team. The defenseman’s blast from the point beat Johansson top shelf, forcing over time between the two teams.

Both teams had ample chances in the five-minute overtime period, but needed a shootout to force a winner. Couturier and Patrick both delivered for the Flyers, while Elliott denied Rasmus Dahlin and Casey Middlestadt on Buffalo’s attempts.

“Carter’s a very young goaltender,” Vigneault said post match. “We all believe in him and think he has a ton of potential. Do believe he has to battle a little more in goal at this time. He’ll work with [goaltender coach] Kim Dillabaugh to address that.”

The Flyers stay in fifth place in the East Division and will remain at home on Thursday for the first of two straight meetings with the Washington Capitals.