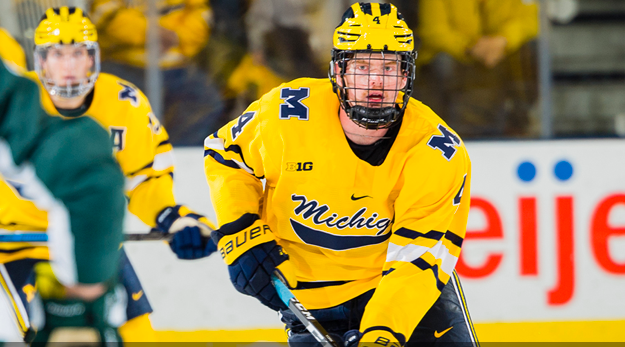 2019 first round draft pick Cam York impressed with Team USA earlier this year at the World Juniors Championship and will now get a crack of making the Philadelphia Flyers roster.

The Flyers announced Wednesday they’ve signed York to a three-year entry-level contract on Wednesday. York, the No. 14 overall selection by the Flyers in 2019, will see his contract begin this season after playing collegiately at the University of Michigan.

“We are pleased with Cam’s development and believe he is ready to take the next step with our organization,” said Flyers GM and President of Hockey Operations Chuck Fletcher. “He was one of the top collegiate defensemen at the University of Michigan and was instrumental in helping lead the United States to the gold medal at this year’s World Junior Championships.”

The 20-year-old was team captain of Team USA at the 2021 WJC, where he recorded six points and helped the Americans win the Gold Medal. He is coming off his second season at the college level with the Wolverines, where he played in 24 games and recorded 20 points and a +14 rating.

York earned First Team All-Big 10 honors and was also named the Big 10 Defenseman of the Year in 2020-21. Prior to getting drafted, he spent one season with the U.S. National Team Development Program (USNTDP), and led all defensemen by averaging over one point per-game – 65 points (14 goals-51 assists) in 63 games.

The Flyers have been one of the worst defensive teams in 2021 and will hope York can make an impact this season or early next.