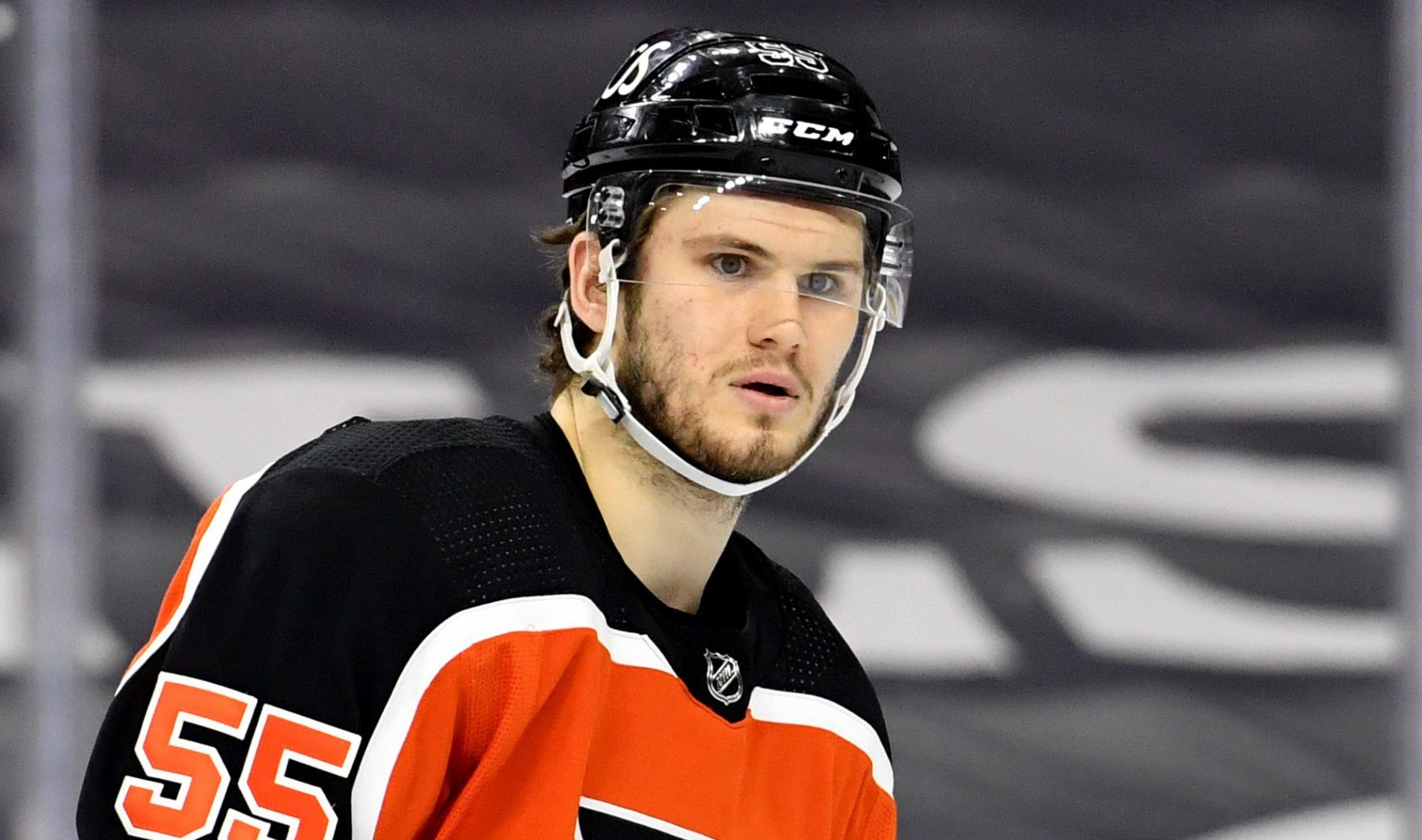 Sam Morin’s professional career had taken a bit of a hit over the past few seasons, but the defenseman-turned-forward delivered his brightest moment yet in Saturday’s performance for the Philadelphia Flyers.

Morin scored his first career NHL goal which proved to be the game-winner as the Flyers downed East rivals New York Rangers 2-1 at the Wells Fargo Center. It was a long-time coming for the 25-year-old Morin, who eight years ago was the Flyers first round selection in the 2013 NHL Draft.

“Yeah, it’s pretty special,” Flyers veteran goaltender Brian Elliott said about Morin. “This guy’s been through a lot in the organization. A lot of injuries and surgeries and he’s always come back with a smile on his face. Every day, ready to work, can’t wait to get back on the ice with the guys. I think that’s why everybody is so happy. When you work so hard, and guys can see it, and you bring his energy every day, no matter if he is in the lineup or not in the lineup, it’s something special and it just rubs off on the guys and we’re so happy for him.”

“I don’t know [when asked about when he’d scored his first goal],” Morin said. “Obviously it’s been a hard couple of years for me. I was just trying to take it day by day. It’s a cliché, but that’s what I did. When I tore my second ACL and obviously when they told me I was going to be forward at the beginning of the year, I was just happy to be back with the boys. Just how fast it goes. I go in the AHL and play D. I play pretty well and two weeks after, you’re playing in the NHL. It’s crazy. You always need to stay ready. It goes so fast.”

Morin has overcome several knee injuries throughout his professional career to get to where he is today. Drafted as a stay-at-home defenseman, Morin was moved to winger by Alain Vigneault this preseason in hopes of making an impact with the Flyers.

In his sixth appearance of the 2021 season, Morin delivered the moment he’s been waiting for since he got drafted. A snap shot with 4:27 remaining in the third period beat a red-hot Igor Shesterkin to give the Flyers a 2-1 lead. It was a lead they wouldn’t relinquish, ending a five-game home losing streak and leapfrogging New York into fifth place in the eight-team East Division.

“It was absolutely crazy,” Morin said about the goal. “I just saw Raf [Raffl] put his hand in the air and screaming. Ghost [Gostisbehere] flying on me. I’m really happy. It’s the best moment in my life. I don’t score a lot of goals. It was a big one. A big W for us. It was a big moment for me. I’m going to enjoy it and reset for tomorrow. We got a big game against Buffalo in two days. We can’t be too high. Just enjoy the moment and go after it.”

Morin was coming off an emotional performance on Thursday night, for the wrong reasons. He was fined $3,014 by the NHL for unsportsmanlike conduct following a fight with Rangers forward Brendan Lemieux in an eventual 8-3 drubbing the Rangers on home ice. After delivering the final blow to Lemieux in the fight, Morin was a bit too aggressive by slamming the winger’s head into the ice as they fell downward.

Unlike some young players, Morin dusted himself off and prepared for the next opportunity which came on Saturday. He totaled over 12 minutes of ice time while also registering two shots, with one proving to be the most crucial for the out-of-sync Flyers. Now he will aim to use that game-winner as motivation to help the team get back into the top four of the division.

“There’s no doubt that, not just myself, but our whole team, from top to bottom is extremely happy with him being able to contribute tonight and get the winner,” Vigneault said about Morin. “He’s been through so much. We all know his situation in past years with the injuries. Got a chance to play a little bit with Scott [Gordon] in the American League. Was playing on D and was playing well. Ever since we’ve called him up, he was trying real hard. Tonight it was a big goal for us.”

“Anyone that’s gotten to know Sam over the years, he’s a good, big, young Frenchman. He’s from the farm. Just a wholesome young man that everybody that’s gotten to know him, really likes. There’s no doubt there was a lot of joy for him and the team tonight. We needed this win. I thought we deserved it. We worked extremely hard. Got good goaltending. Guys competed. We were able to find a way to win this game.”

Morin, a lower-line player in Vigneault’s offense, has showed many glimpses of talent in the past and now will aim to stay healthy and full of confidence heading into a busy road trip at Buffalo and Boston this week.