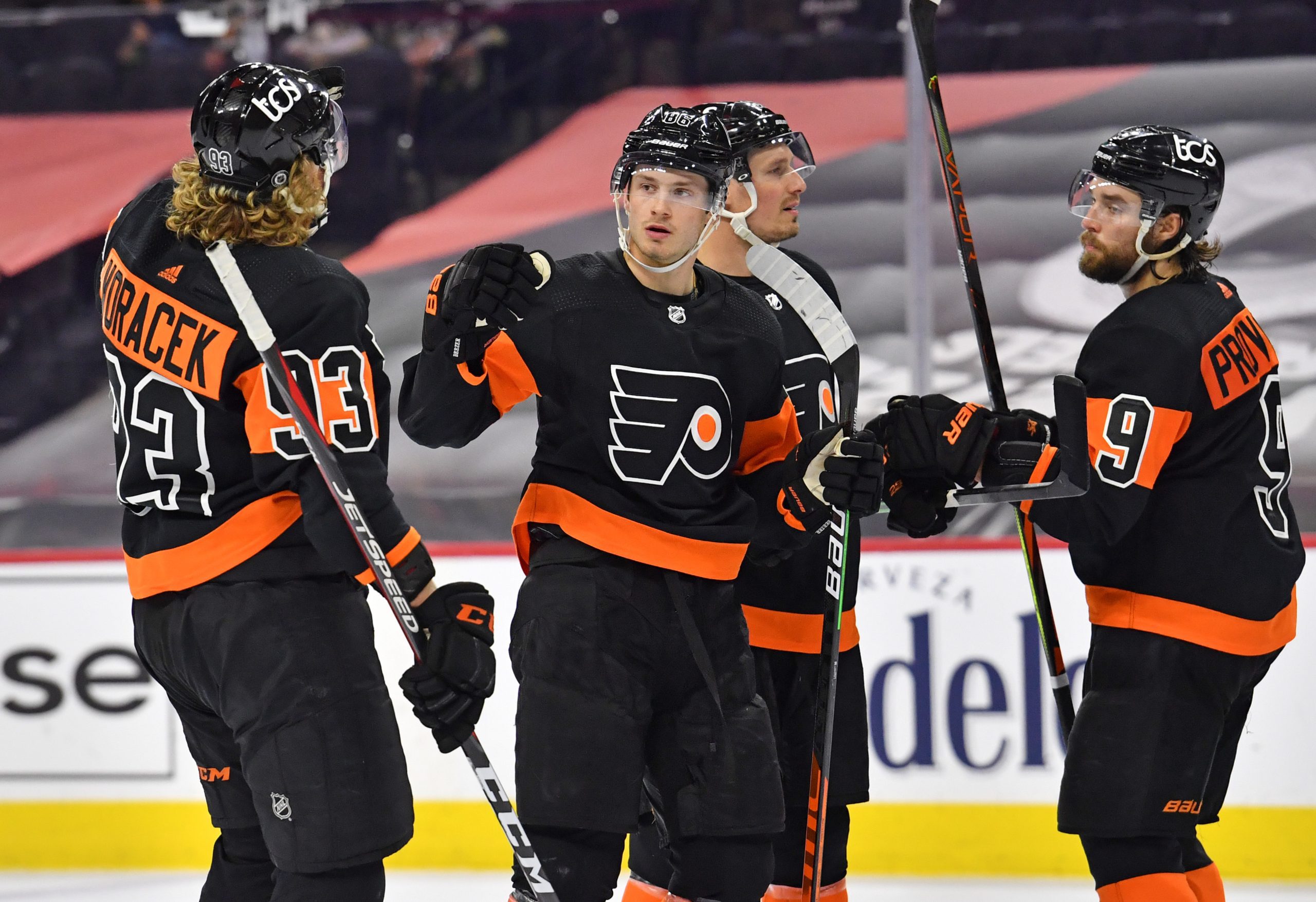 Joel Farabee geared up for the 2020-21 National Hockey League season by putting on 15 pounds and assuming a bigger role for the Philadelphia Flyers. After 55 games played, Farabee lived up to his expectations by putting himself in the Flyers history books and taking a major step forward in his overall development.

Farabee scored two goals on Monday night as the Flyers ended their regular season with a 4-2 win over the New Jersey Devils. The New York native finished the campaign with 20 goals and the Flyers leading goal-scorer, becoming the youngest player to do so since Eric Lindros’ haul in 1993-94.

The 21-year-old was a bright spot for the Flyers in what finished as an ultimately disappointing season, one that saw them miss the playoffs. Farabee’s impressive second career NHL season not only was a reward for his hard work last offseason, but a positive impression on his teammates and head coach, Alain Vigneault.

“Yeah, definitely,” Flyers assistant captain Sean Couturier said about Farabee’s status of being a star on the team this season. “I think he took a big step forward in his development. His expectations were high since we drafted him. It’s nice to see him develop into the player he’s becoming. He’s only going to get better too, with time as he ages and gets stronger, physically mature. It’s fun to see a prospect like that emerge. He had a great year. I think he was one of the bright spots that we had this year.”

“I think going into the season I never really expected it to happen, but I think, personally, I’m proud of myself,” Farabee said. “I put a lot of work in this summer working on my game. It feels good that that paid off.”

Farabee registered 21 points last season for the Flyers, showing his scrappiness as a player and the willingness to work for his opportunities. Despite being almost sent down at the midway point, Farabee remained with the Flyers and also got his first taste of the NHL Playoffs in the summer.

The winger concluded his second season with 20 goals and 18 assists for 38 points, 17 more than his entire haul of last season. His ice time, hits, shot percentage and blocks all increased, showing more of what Farabee can bring to the team during a full 82-game season.

His hard work also earned him the Pelle Lindbergh Memorial Trophy Award prior to Monday’s final game, which is given to the Flyers Most Improved Player on the ice. While fellow young players Oskar Lindblom and Nolan Patrick struggled for consistency, Farabee did not and now will be expected to take an even bigger leap when things get rolling for the Orange and Black this fall.

“There is no doubt that the young man came in and played extremely well right from the beginning,” Vigneault said about Farabee. “I’ve said this on a number of occasions, a very smart hockey player, great hockey sense and good for him to get 2 tonight to get to 20.”

“He’s a young player with lots of potential. I don’t think he’s achieved his full potential. It’s going to be on him to have the right type of attitude, the right type of work ethic, right type of commitment here moving forward to become the best player that he can be. As an organization, as a team, we need him to fulfill that. He’s proven that he can be an effective player, useful player, player that helps a team win. Can play 5-on-5 minutes, he can play power play and he can kill penalties. We need him to continue that progression.”