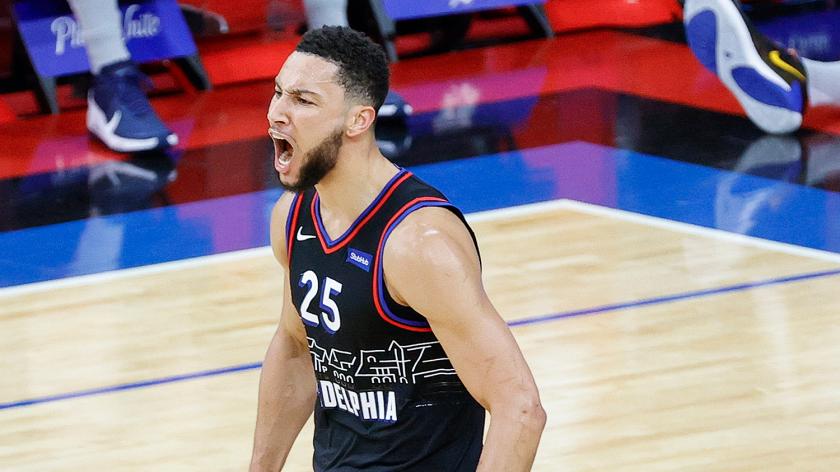 I need everyone to take a deep breath. As of this writing, we know Joel Embiid has a SMALL lateral meniscus tear. Being that I am as close to the exact opposite of a doctor that can exist, I am staying optimistic that he will only be out for a few more days before returning to the court and (hopefully) dominating the Eastern Conference Semi-finals because the team seemed to emphasize SMALL in their post, so in my invalid medical opinion, no doubt he is back for game 6/next series game 1.

Obviously, we all have the awful gut feeling in our stomachs, but worrying about it won’t solve anything. Hopefully our 76ers get the job done tonight minus Embiid, and then we give him a little more time to get back to health before round 2.

With that note of blind optimism, here is your Wednesday Wisdom:

Yup, steering right into the eye of the storm here. Like I said, no Embiid tonight, and to be honest, that does scare me in terms of the overall outcome of this game. That being said, it has created a play that I’ve fallen in love with tonight, and it is arguably the most frustrating bet in Philadelphia sports, but I can’t help it… I love the Ben Simmons over 17.5 points tonight.

Yes Hack-a-Ben is annoying as hell to watch, but I don’t see any reason the Wizards won’t go there again. With that, one of two things will happen… either Ben will continue to go 50% from the line and frustrate the living hell out of us, potentially adding 5 more points than usual or he will shoot 70% and get 7 more points than usual. With no Joel, I’m actually buying into the idea that Ben will start this game off strong similar to the way he did in game 2, where he nearly scored this total in the first quarter. It’s a scary bet and I understand if you can’t ride it with me, but I’m going in on it.

This series is turning out to be a let down, when I really thought it was going to have the power to go the distance and be the most entertaining series of the first round. That just hasn’t been the case as the Hawks have dominated the last two games, taking a 3-1 series lead. I really want to take the Hawks tonight to just keep riding, but I admit the Knicks scare me a bit because of how electric The Garden was in Game 2.

That takes me over to the total. I’ll admit this, I’ve personally bet on this over a few times in this series (only the best bets go public!), and it is a really frustrating bet that I have pushed and lost on separate occasions. But I’m ready to die on this hill. These teams scored incredibly high amounts against each other in the regular season matchups, and some of that offense is bound to show up at some point right?

This might be the last chance for it, and I do trust my logic (but hey I’ve been wrong before).

Usually I split these posts between basketball and football, but today I’m just loving the Basketball slate to much. The Mavericks currently find themselves in a similar situation to the 76ers, with their star player (who seemingly carries all their hope) injured. Luka has suited up in every game, but he clearly was not himself in game 4, and sadly for Mavericks fans, I’m not sure he can recover from this injury in time to help them in the series.

As I previously mentioned, I am the farthest thing on planet Earth from a doctor. That being said, I know that when you have a problem stimulating from your neck, that usually isn’t something that goes away very quickly. Until Luka proves he is healthy, this will be an easy bet the rest of the series. Clippers are favored by 7 in a series that is 2-2 and they lost both previous home games. If Luka was healthy, this would be to many points, but when he is only able to give X% of himself, it destroys everything Dallas does on the court, which leads to contests like game 4 where LAC won by 25.

I’m not buying into Luka being able to run the offense in his normal capacity (so also look at his player props!), so I’m riding with Kawhi.

Now that we have our picks, we can take our mind off of our injured big man for just a few hours…