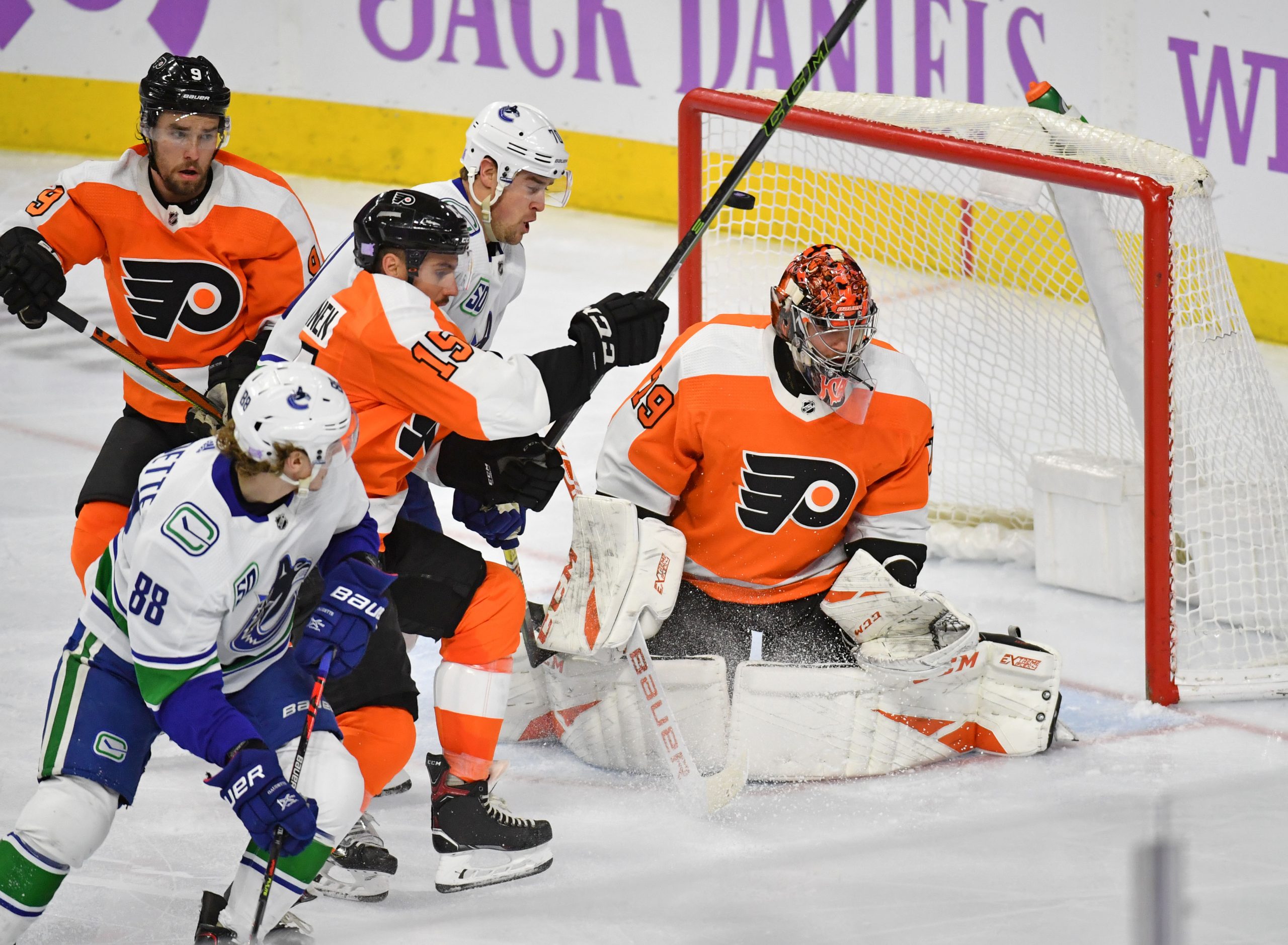 The Philadelphia Flyers will kick off their quest for a third-ever Stanley Cup trophy on October 15 at the Wells Fargo Center.

The Flyers, in conjunction with the National Hockey League, released its schedule on Thursday for the 2021-22 regular season. The Vancouver Canucks will visit the Orange and Black to kick off the new season while the Flyers will conclude the regular season April 29 at home vs. the Ottawa Senators.

Alain Vigneault’s team will open the season with a four-game homestand in front of their fans for the first time since the 1974-75 season. The first four games of last season were played at home, but in a closed Wells Fargo Center. The homestand includes the first game for the Flyers against the Seattle Kraken, with the NHL’s newest franchise coming to town for the second game of the year on October 18.

The team’s first road trip starts after a four-day break in the schedule and takes care of their Western Canada obligations right away, with stops in Edmonton, Vancouver and Calgary forming a three-game in four-night set. That trip starts off a stretch where the Flyers will play seven of nine on the road from Oct. 27 – Nov. 13.

Philadelphia’s first visit to Seattle will come on December 29 to start the team’s annual excursion at the turn of the calendar year. The club will continue through the Pacific Division with stops in San Jose, Los Angeles and Anaheim before returning home to kick off the home portion of the 2022 schedule on January 6 vs. Pittsburgh, which starts a three-game home stand.

The current version of the NHL schedule contains a 20-day Olympic break from Feb. 2-22. The Flyers will come out of that break with a visit to Detroit followed by a season-long six-game homestand that starts on Feb. 26 vs. Washington and runs through March 8 when Vegas makes its visit to Philadelphia.

Another five-game road trip awaits the club in the back half of March. They will play the five games over eight days from March 22-29, with stops in Detroit, St. Louis, Colorado, Nashville and Minnesota.

Due to the later start to the season and subsequent Olympic break, the regular season will extend through the month of April. The Flyers will play an even number of home and road games down the stretch, with seven home games over that final month.

With February mostly dedicated to the break, the schedule is evenly spread out over the rest of the calendar, beginning with the seven games over the final two weeks of October. The Flyers play 14 games in November, 13 in December and 14 in January before concluding with 15-game months in March and April. The Flyers will also play 15 back-to-back sets, with all but one of those sets coming as a larger three-game in four-night span.

The NHL is returning to its previous scheduling format after re-aligning the divisions for 2020-21 due to COVID. However, the addition of Seattle takes two dates away from Flyers divisional opponents. They will play Columbus and New Jersey just three times each, while facing the other teams in the Metropolitan Division four times each. They will continue to play Atlantic Division opponents three times each, and will see every Western Conference team once at home and once on the road.

Here’s the full schedule, via the Flyers’ website: [Orange = Home, Gray = Away] 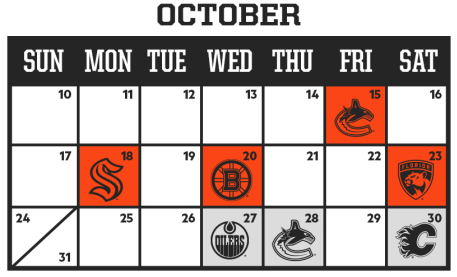 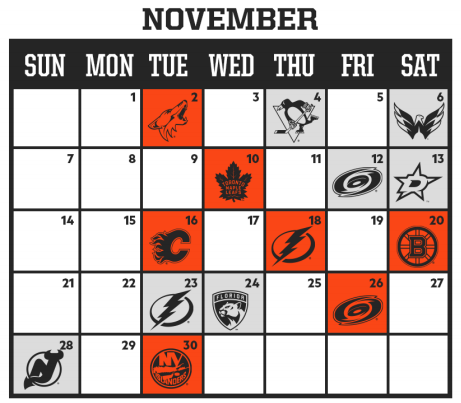 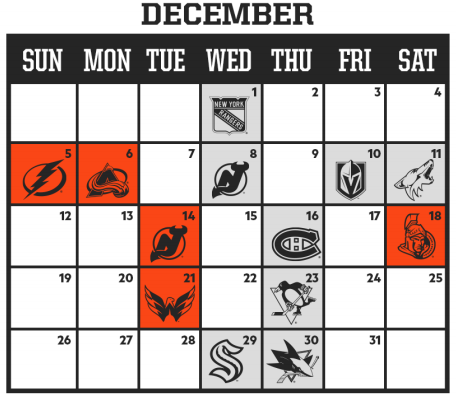 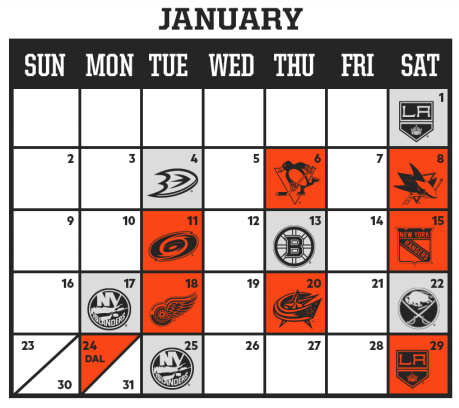 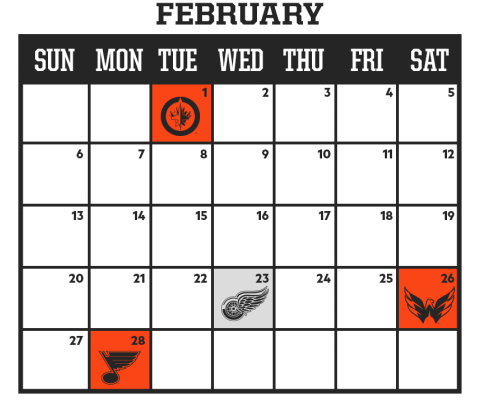 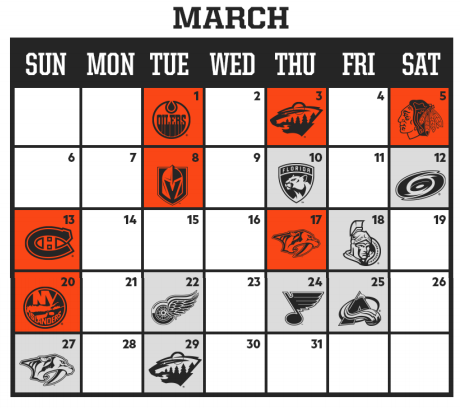 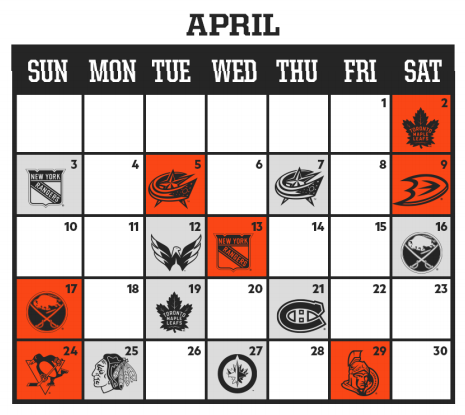