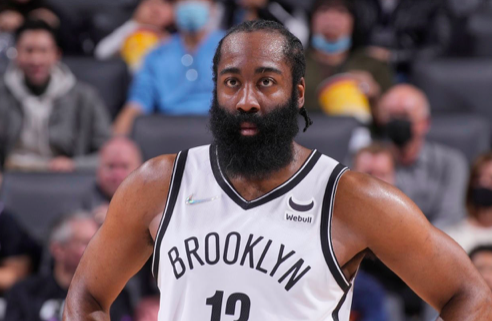 James Harden’s arrival in Philadelphia has certainly given both the Sixers players and fanbase a spark, but both parties will have to wait at least one week for the star shooter to make his debut for the team.

Harden will miss the team’s final two games before the All-Star break as he continues to rehab a hamstring strain, the Sixers announced Monday. The Sixers will host the Boston Celtics at the Wells Fargo Center on Tuesday before traveling to face the Milwaukee Bucks on Thursday.

Harden did report Monday for practice with his new team following the blockbuster trade with the Brooklyn Nets last week. He was seen taking part in shooting drills with fellow guard Tyrese Maxey, the likely guard pair once Harden is back fully healthy.

His first chance to make his debut for the Sixers will now come on Feb. 25 at the Minnesota Timberwolves while March 2 could be his home debut. Harden has excelled once again this season, averaging 22.5 points per game, 8.0 rebounds per game, and 10.2 assists per game, all among the top-thirty in the league.

“We didn’t do anything live, but he did all the skeleton [drill] work, all the defensive walk-through stuff, all the shooting,” Rivers said about Harden’s first practice. “He did everything everybody else did. Obviously he’s a high-IQ basketball player, so the stuff we do, he does anyway, and the other stuff we threw him out there and he kind of figured it out.”

“I’m focused on both,” Rivers said, referring to winning this week’s games while planning for Harden’s debut. “But it’s not hard. Listen, putting James Harden into an offense is not that hard. It really isn’t. I mean, he’s just a terrific basketball player, so you don’t need to overcomplicate it. You know where he’s been great at, you know which direction he wants to go, and so you put him on those sides of the floor.

The trio of Maxey, Harden, and Joel Embiid could be exactly the spark to propel the Sixers into first place in the Eastern Conference as several teams remain in the fight. Maxey, who has stepped into a starting role this season, is averaging just over 17 points per game, while also contributing over three assists and rebounds per night.

The 21-year-old has a great opportunity to not only form a special partnership with a future Hall of Famer like Harden, but pick his brain to hopefully be as great as him one day.

“Just stand next to him and hope it rubs off,” Rivers said when asked how he hopes Maxey will begin to learn from Harden. “Really. I love that we’ve gone from our skill development, when I got here everyone was doing individual workouts. Every single guy on every basket, and I was like, ‘I thought this was a team game.’ So we brought it to more two- and three-guy pods on baskets, just to get guys with each other, and clearly our first day we wanted to make sure James and Tyrese are together, because just being together will help Tyrese.

“And James was blown away by Tyrese. Like, again, he had two dunks today and James was like, ‘Oh, my gosh.’ Because you don’t see that, how athletic he is. I thought that surprised James today.”

The Sixers sit in fifth place in the Eastern Conference, two-and-a-half games back of first place Miami.