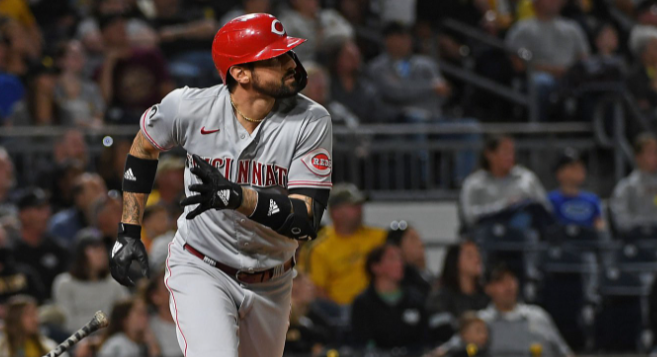 The Philadelphia Phillies are closing in on their latest big acquisition, with hopes of slugging their way into the MLB Playoffs in 2022.

Nick Castellanos is set to sign with the Phillies on a five-year, $100 million deal, MLB.com reported Friday. The third baseman/outfielder would follow Kyle Schwarber as the newest offensive addition to the Phillies, giving Joe Girardi another talented hitter to call on this season.

He opted out of his final two years with the Reds this winter, leaving $34 million on the table. Castellanos will now make $20 million in each of the next five seasons, an increase to what he was making in Cincinnati. It was a move that Bryce Harper didn’t think would get done after the recent acquisition of Schwarber earlier this week.

“Definitely didn’t really think that,” Harper said Saturday. “Just because Casty is one of the best guys on the market, so you just never know what’s going to happen. It’s incredible. I would never have thought that would have happened. But like I said, you have to have the faith in [president of baseball operations Dave] Dombrowski and [principal owner] John Middleton to do their job, to get the team that’s best going out there.

“What a lineup we’re about to have,” Harper added. “I mean, it’s a special thing to be able to have guys at the top of our lineup and in the middle of our lineup, pretty well-rounded, just the length of our lineup is pretty impressive. It looks good on paper, but you still have to go out there and give it your best effort. Still go out there and work hard.”

Castellanos and Schwarber join 2021 N.L. MVP Bryce Harper and All-Star catcher J.T. Realmuto in the Phillies lineup this year. The Phillies barely missed out on the playoffs in 2021, but with their new additions, will be knocking on the door of the N.L.’s best in 2022.

The Phils are continuing spring training in Florida before kicking off the 2022 regular season at Citizens Bank Park on April 8.