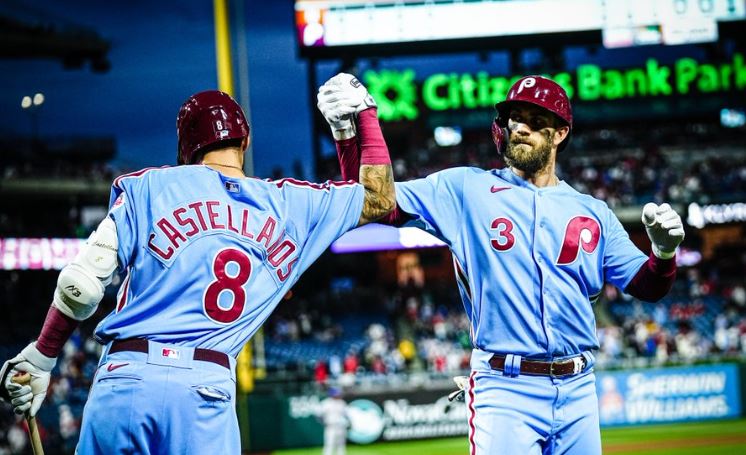 We’re back with a new Brew. The Phillies are not living up to expectations so far this year. Joel Embiid came back for game 3 against the Heat and brought the 76ers back to life. Wrestlemania Backlash took place last night. There was a huge upset at the Kentucky Derby. As always, we have a lot to get to, so let’s do this. It’s Brew time!

A simply Amazin’ 9th for the @Mets.

PHILLIES BACK TO BACK HOMERS!

“no I swear the Phillies were supposed to be good this year” pic.twitter.com/NIUBvefOlr

First look at A.J. Brown in an Eagles uniform 👀

Jimmy Butler on Joel Embiid: “I want him to get right, because we want to play against who I call the MVP.” pic.twitter.com/zc8kC6WtOl

A masked Joel Embiid returned for game 3 against the Heat

76ers came away with a huge win in game 3

NEW from Philadelphia: Joel Embiid addresses his return against Heat (with an interesting admission), what “pissed him” off watching Bam; their strategy against Heat; playing with a mask and a soliloquy on fans and the F word: https://t.co/6QHzeHdxk8

76ers tie up the series

Ben Simmons to have back surgery

Ben Simmons will require 3-4 months of rehabilitation after undergoing back surgery on Thursday, but is expected to be fully recovered well ahead of training camp in September, sources told @wojespn. https://t.co/a5mHYs9ybO

Ray Didinger fights back tears as he announces his retirement: “I just want all of you to know how much I appreciate your friendship and support. It means more to mean than words can ever express.” pic.twitter.com/ekNfPyb8cf

The Bloodline get the victory

“Since Day 1! Born and bred! This is what the Bloodline does! Runs this business!” – @WWERomanReigns 😤#WMBacklash pic.twitter.com/7iAebmafo9

Wild action during the main event

Cody Rhodes takes Seth Rollins down for a second time

The newest member of Judgement Day

What’s up with this?

After the #WWETrenton show Roman Reigns mentions starting a new phase of his life & he doesn’t know if he’ll return to Trenton again.pic.twitter.com/PApvAH6wyv

BREAKING: Rich Strike came charging up the rail to overtake the leaders in the closing strides for a stunning 80-1 upset in the Kentucky Derby. https://t.co/SHSnbekbJg

A race for the ages

BREAKING: @dallascowboys Owner Jerry Jones was involved in a car accident this evening near Wolf and Harry Hines around 8:08 PM per sources with DFR and DPD.

Sources tell @rlopezwfaa and myself Jones was transported to Parkland but injuries aren’t serious.

Rupert Murdoch and Fox News do the devil’s work daily

Brian Kilmeade Questions Why A Pregnant Woman Got An ‘Important’ Job https://t.co/5LWGQNtRSl

Because who doesn’t want to hear what Pauly D thinks about inflation???

Good to know Fox News is getting commentary on inflation from Pauly D, someone who spends 100k on hair gel a year. Hopefully they’ll get thoughts on defensive spending from the cast of Teen Mom pic.twitter.com/kYbGd1OPZ8

GA Senate candidate Herschel Walker’s son says pro-choice women don’t have to worry about whether abortion is legal or not because they probably aren’t having sex. pic.twitter.com/aRlghmzO6X

Republican voters are the problem

A murderer just won a Republican primary for the Clinton Township Board in Indiana. Andrew Wilhoite is currently in jail awaiting trial after he confessed to striking his wife with a flower pot and throwing her body in a creek. pic.twitter.com/uIuhiezmCl

I can’t say that I’m shocked

Penis on arm man wants to shoot his shot

JT’s surprise for his wifey

REPORT: Drake signs new label deal estimated to be worth around $400 millionhttps://t.co/S38jrTi2lt

50 Cent sounds off on Dave Chappelle’s attacker not facing felony charges: “Is the LGBTQ gonna kill Dave right in front of us?”

It looks like Kanye West and Chaney Jones are still out here going strong, as they spend time together in Japan!! ❤️ (📸: @gettyimages) pic.twitter.com/WbiCogF49y

Doctor Strange is out now in theaters

Doctor Strange in the Multiverse of Madness [62] is in theaters: https://t.co/jkCT4Yr4oJ
“A superhero extravaganza with too many fight scenes. But director Sam Raimi doesn’t overplay them, and the creative visuals keep them from becoming monotonous.” – Mick LaSalle, SF Chronicle pic.twitter.com/vk9O9Nk6P9

Why have I not heard of Eleonora Incardona before today????