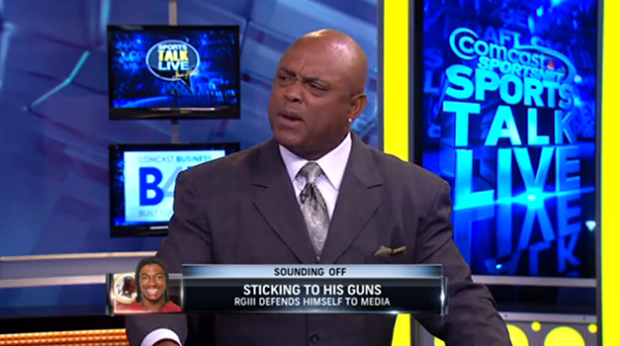 Former Eagle, but forever Redskin, Brian Mitchell, was on Comcast SportsNet Mid-Atlantic on Wednesday and reacted to Robert Griffin III’s apparent comments that the media has been unfair to him. Mitchell has been a Redskins analyst for years, and we still miss him in Philly. Especially when he goes on rants like this. Some quotes, via the Washington Post:

“You need to shut the hell up and start playing football.”

“You came here to be a football player, not a damn philosopher.”

“I’m 47 years old. What the hell, I’m gonna listen to a little wet-behind-the-ears 24-year-old kid who’s done nothing, nothing to be sitting up here thinking we’re going to listen to him all day? Do your job.”

“He’s a smart enough young man with enough intelligence to know how to say something the first time.”

“What I’m seeing right now is a team that’s coddling a young man, which is hurting him in the process.”

“He does a lot of stupid stuff, and it’s about time he hears it, instead of people kissing his tail all the damn time.”

“I see this one dude who we talk about every day too damn much because he doesn’t know to shut up and perform.”

If quotes aren’t your thing, watch the video below.

On Thursday night, RGIII suffered a concussion in Washington’s second preseason game against the Detroit Lions. I wonder if Mitchell feels bad now… or vindicated?