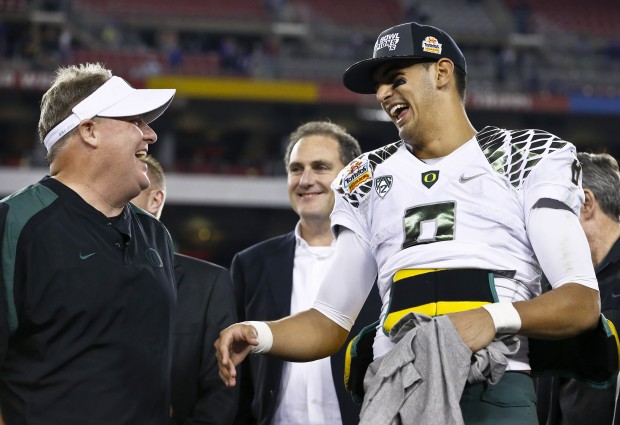 I’m not sure why so many people on the internetsssss are going nuts about this today. We already knew Chip Kelly wanted Marcus Mariota well before the NFL draft last April. It was reported multiple times that Chip was willing to give anything to the Titans, not limited to and even including body parts, for their draft spot so he could draft his star college quarterback. And yesterday, NFL insider, Peter Schrager, was a guest on The Herd with Colin Cowherd and reported the same thing he said months ago.

Look, last year the Eagles offered the Tennessee Titans, and I know this – a 2015 first-round pick, a 2015 second-round pick, a 2016 first-round pick, they said, ‘take any of our quarterbacks. That’s [Sam] Bradford, that’s [Mark] Sanchez, that’s whoever. And take anyone on our defense. We want that No. 2 pick’ from Tennessee. And the Titans said no. They took [Marcus] Mariota.'”

And then we’re going to act like the Eagles should have done the trade because it would’ve brought a franchise quarterback in Marcus Mariota when maybe, roughly, using the eye test, about 75% of the fan base was against trading for him. Does he look like a franchise quarterback? It’s hard to tell – he plays for the Titans. And he didn’t play very many good teams last season. Would he have done a lot better under Chip with the Eagles? I’ll go out on that limb and say yes. But, Chip’s dismissal from the team didn’t seem much like a result of his results on the field, but rather personal animosity off the field. So it’s entirely plausible to believe if Chip was able to make that trade and land Mariota that he still would have been fired this past season.

So, I guess that’s where we’re at now. Parroting old news because we have a 10-day memory.