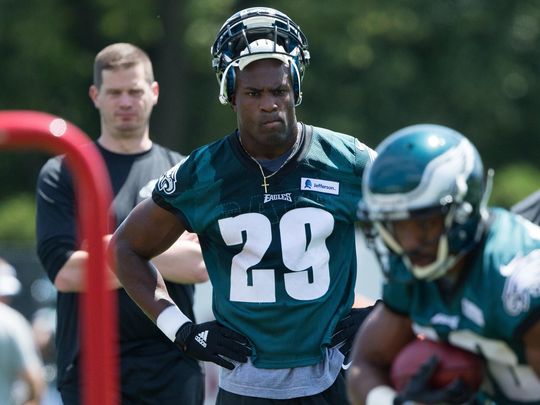 After last season’s crash-and-burn of DeMarco Murray’s production, many – including myself – didn’t think the running back would be back with the Eagles this season. Regardless of the team firing Chip Kelly, hiring Doug Pederson, and now re-signing Sam Bradford, Murray still is reportedly unhappy in Philadelphia and would love to have a chance to reunite with his precious Cowboys – the same team that he abandoned for money.

The Eagles reportedly are listening to offers for Murray at this point, but would likely have to eat a lot of money to get Murray out of town. But therein lies the question – is it worth it to keep a guy who’s [reportedly] unhappy just so he doesn’t return to a rival who’s probably willing to accept him back with open arms as long as the money isn’t steep? The Eagles would incur a $4 million cap hit should they trade him, but the Cowboys wouldn’t want to add his salary on their books, either. So Murray is stuck right now between a rock and a hard place, especially because the Cowboys apparently want him back. Really bad.

The Dallas Morning News is now reporting that the Cowboys would love to have Murray back, as long as it’s for the right price.

But as the DMN’s Jon Machota said back in December of 2015, if the numbers were right, Jason Garrett would love to have No. 29 back in his backfield.

Machota: The Cowboys know more about DeMarco Murray than any other team in the league. If they could get him back for the right price, they’d do it. They didn’t make a better offer to him last offseason because they had a limit to what they were willing to spend. It wasn’t because of locker room problems. Jason Garrett would love to have Murray still on this roster.

This feels like one of those soap operas that will end in a Super Bowl for the Cowboys and a DeMarco Murray MVP award. Doesn’t it? Though, Darren McFadden didn’t do too shabby behind that offensive line, so if money’s an issue, there’s really no chance Murray could return to Dallas unless Jerry Jones and co. butcher their own roster. Which still remains a very real possibility.

However, if the main reason Jeffrey Lurie and Howie Roseman brought on Doug Pederson as head coach is because he knows this fanbase, and given the fact that Pederson reportedly has final say over whether Murray stays or not, something tells me we’ll be seeing DeMarco back in midnight green next season.