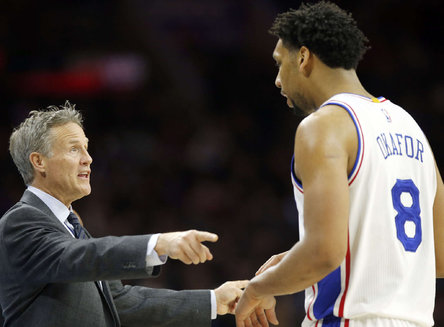 All of the talk around Philly lately has been about the newest Sixer Ben Simmons. However, what hasn’t been addressed yet by the Sixers is what is going to happen this year with all of their big men.

Will Jahlil Okafor get traded before the season? What about Nerlens Noel? Why don’t the Sixers trade him? Can Joel Embiid stay healthy to make trading either of the aforementioned a plausible idea?

Well if you ask Brett Brown, he’d tell you that he’d be shocked if all three big men were on the team to start the season. Brown appeared on WIP’s Mike and Ike Show yesterday and had this to say:

I would be surprised, [if we started the season with our current crop of big men]. I would be surprised. I talk freely always with my players. This is something that in a different world maybe it’s awkward. It isn’t because it’s true, it’s real, it’s part of pro sport. Sometimes for the players too, like they have to understand that maybe it’s best for them too. And so, all over the place — instead of sort of hiding from this kind of what could be the elephant in the room or an awkward moment —  I don’t like doing that. I speak freely with my guys about it.”

You can listen to the audio below.

The Sixers still need point guard help and they’ll address that in free agency. I don’t mind the idea of trading Noel if the thought is that either he or Okafor must go. However, due to the questions marks surrounding the health of Embiid, the Sixers should remain cautious and make sure they make the right move that helps the team if Embiid can’t stay healthy long-term.

Whatever the case may be, I’m as excited for this Sixers team as I’ve been in the longest times. I just wish the season would start already.