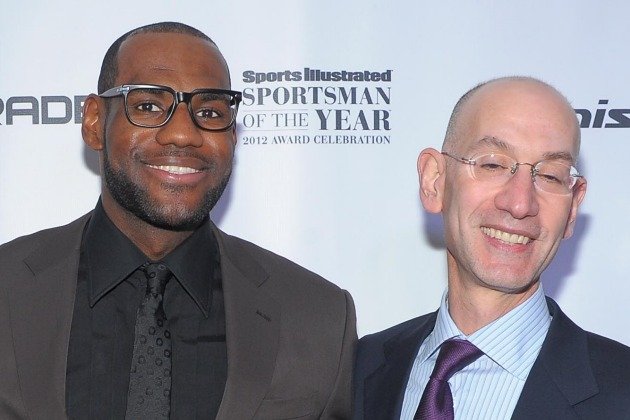 The NBA Finals featuring the Golden State Warriors and the Cleveland Cavaliers is heading to a Game 7. After trailing in the series 3-1, the Cavs rallied to win Games 5 and 6 to tie the series at three games apiece. They’ve been playing with a new found sense of ferociousness, especially on defense. They’ve smothered the normally high-powered Golden State offense.

In last night’s Game 6 in Cleveland, LeBron James led the way with 41 points, 8 rebounds and 11 assists. He even scored 18 straight points in one stretch. He’s been playing like a savage, no doubt. Don’t believe me? Just check out this dunk:

With the way the Cavs have played the last two games, it’s hard to imagine anyone in today’s league stopping them. Clearly they didn’t need any help in those two games. But, they got a huuuuuuge assist, again, by the NBA to get to this point. They were left for dead after Game 4 when they went down 3-1. However, during that game, this happened:

Green was assessed a flagrant foul for the tap to LeBron’s balls, which honestly I didn’t even know he had. Green had accumulated two previous flagrant fouls in the NBA playoffs, therefore he was suspended for Game 5. Green, who is arguably the heart and soul of the Warriors, was told by his coach he didn’t have to apologize to anybody.

Quote from the NBA's Kiki Vandeweghe on Draymond Green. pic.twitter.com/RpnivqkxQt

So, was that play flagrant foul worthy? In my opinion, hell no! But this is the NBA and they’ve been stepping in over the past 13 years to try to get this Cavs franchise finally win a championship.

The Cavs have magically won the draft lottery four times since 2003. That shit is unheard of. I mean, they’ve won three draft lotteries in four years. Come on! Yeah, the Los Angeles Clippers won the lottery in 2011, but I’ll be damned to not believe the NBA pulled their weight to give that pick to Cleveland.

I’m certainly not one to believe in conspiracy theories, but that is too much of a coincidence. The Sixers have flat out sucked for so many years and they finally just won their first draft lottery since 1996, where they selected Allen Iverson with the first overall pick in the draft.

Again, I’m not saying the Cavs wouldn’t have won Game 5 with the way they’re playing, but that bullshit flagrant foul call and subsequent suspension of Green clearly stopped all of the momentum that the Warriors had. It’s the playoffs, it’s the NBA Finals, let the men play! Playoff basketball is suppose to be physical, unless you think like LeBron James. Here’s what he said after Game 4:

I don’t know what should happen. It’s not my call. That’s the league office. They’ll take a look at it. We all saw it in the locker room. You know, like I said, as a competitor, I love going against Draymond, and I’m all about going out there and leaving it out on the floor. But when it gets a little bit more than what it should be, that’s what caused me to have words with him.”

James needs to grow the hell up and stop bitching already. The act is old and so is the NBA lending a helping hand to the Cavs franchise.

But, if anyone knows a thing or two about taps to the balls, it would be James.

Perhaps this is what LeBron means by "high road".

Game 7. Sunday night. 8:00 P.M. The Oracle Arena in Oakland. Hopefully the refs will just let the players play so that we can get a clear and decisive NBA Champion.