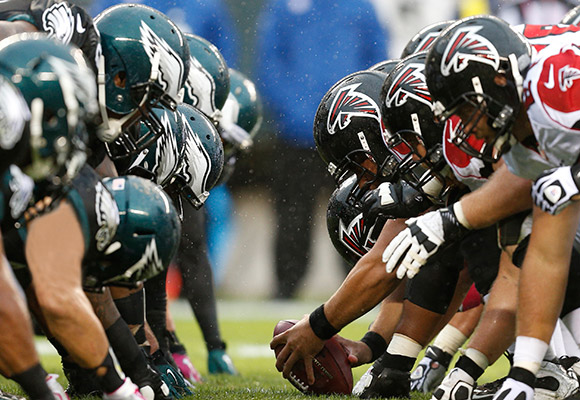 The Eagles find themselves in a must-win game on November 13th this year. If they want any shot at the playoffs – and, let’s be honest, nobody thought they’d sniff the playoffs before the season started – they have to defeat one of the best offenses in the league captained by Matt Ryan and Julio Jones. So, let’s get to our predictions for the game.

Ray Hagan: Leodis McKelvin. Nolan Carroll. Rodney McLeod. Malcolm Jenkins. Do any of those names look like a guy who can cover Julio Jones? Take the woeful offense that seems like defenses only have to cover an area the size of the red zone on every possession out of the equation. Take the fact that Carson Wentz made four backbreakingly bad throws that cost them the game last Sunday out of the equation. Because even if this offense plays its best game of the year, the question is how can they stop the Falcons offense? The answer is, they can’t.

Tony Cutillo: Is it Carson Wentz? Is it Doug Pederson? The questions will continue to be asked with each play call, missed receiver and blown assignment. One thing we need to remember is this is year one. We got spoiled after the illustrious 3-0 start, even when we were trying to temper our own expectations. Now the hardest part of the schedule is upon us with no reinforcements in sight.

Matt Ryan is leading the league in yards (2,980) and touchdown passes (23), while only tossing four interceptions. He already has five 300-yard games this season and his completion percentage is a stellar 69.6 percent. And then there is Mr. Jones, who has consistently left us with bad memories through the years.

The Eagles are undefeated at home this year, but have lost four out of their last five games. Their playoff hopes are dwindling away quicker than the autumn leaves. Unfortunately, I don’t see them coming away with a win this week. With no secondary and no receivers, Dan Quinn will have an early Thanksgiving!

Tyler Trumbauer: The Eagles are now entering the most difficult part of their schedule that has been talked about so often the last few weeks. Carson Wentz is finally going through growing pains as he comes back down to earth and the offense has not produced as well as it did in the beginning of the season. Despite that, the Eagles still could have emerged victorious in nearly every game this season.

Last week, we saw a rough start from Wentz and questionable decisions from head coach Doug Pederson, but the Eagles still could have won. For Sunday, I see both Wentz and Pederson making mistakes, but this time the opponent will be too good. The defense, which will have its hands full, won’t be able to keep them in the game. The Falcons are really good and I think this may be a year where they won’t choke down the stretch. The Eagles have a bumpy road ahead. Buckle up.

PHL Anon: The Eagles have looked great at home this year in beating both the Steelers and Vikings. They opened the week as favorites, but does that mean we should seriously predict a win this Sunday? I wouldn’t be a bit surprised to see us come out on top coming off some questionable losses and what their pass rush has the potential to do every week. That’s the way you beat the Falcons: Get Matt Ryan of his mark, flush the pocket and make him make decisions on the run. The defense will absolutely need to stand up this week.

On offense, expect to see even more of Bryce Treggs. He had a great debut, and is primed to receive more playing time. I won’t get ahead of myself on Treggs just yet, but he does bring a dynamic to this team that helps open up the field for the other receivers, and he looks like he could be a potential steal. This will be a hard-fought game, but I just can’t predict an Eagles win at this point.

Dave Uram: The Eagles are back home, which will work in their favor in terms of keeping the game close. That being said, Atlanta is 4-1 on the road this season with impressive wins at Oakland, New Orleans and Denver. Also, their one loss away from home was to the Seahawks, where the referees arguably cost them down the stretch. The Falcons’ offense will be too much for the Birds depleted secondary, and even though the Eagles’ offense will do better against a weak Atlanta defense, Doug Pederson can’t be trusted with making the right decision in key situations anymore.

Candis McLean: Matt Ryan is playing out of his mind. Julio Jones can’t be stopped. In the past week, Asante Samuel and Terrell Owens have reached out to the Eagles to offer their services. Not because they’re broke. At least, I don’t think. They did that because the Eagles looked horrendous on both sides of the ball. I’m hopeful for a victory on Sunday, but if I’m being honest, I’m like a person sitting in the dark while wearing a blindfold. I don’t see it.

Adrian Fedkiw: The Eagles have yet to lose at home this season (3-0), but the Falcons are 4-1 on the road.

I feel like I say this every week, but if the Eagles can generate a consistent pass rush to disrupt the timing between Ryan and the Falcons’ wide receivers, they have a great shot at winning this game. But I just don’t see this Eagles secondary being able to stop Jones. I also think Big V is in for a long afternoon going up against Beasley, whose already gone for 3 1/2 sacks in a game this season. I expect him to get at least two on Sunday.

My heart wants to pick the Eagles, but my head says otherwise.

Sean Brace: OK, the Eagles haven’t been the easiest team to predict this season, that’s for sure. This Sunday’s game against the Falcons follows suit. Here’s my best attempt. The Eagles are a different squad at home. With wins over the Vikings and Steelers, they’ve shown us they can win at the line over the top teams in the league. The Falcons are a solid squad with one of the best passing attacks in the NFL. It’s not a good matchup for the Birds, who are struggling against the pass at this point of the season. I expect the struggles to continue. Who’s going to stop Julio Jones? Not sure anybody can. Is it possible to keep him under 200 yards receiving? I think Ryan and the Falcons have their way on offense and win a close, high-scoring game.

Nick Piccone: This is what pisses me off. Everyone’s picking the Falcons to win because the Eagles’ rookie head coach and rookie quarterback have looked pretty bad since their 3-0 start. I can’t fault anyone for thinking the Falcons are going to roll on Sunday. In fact, this was going to be the first week I picked against the Eagles because, hell, there’s no reason to feel good about Doug Pederson’s playcalling on offense right now. Atlanta’s defense is subpar, but a subpar defense looks better when it plays an offense that can’t get out of its own way.

But Bennie Logan will likely be back, and that’s going to help the defense. Julio Jones will get his yards, but if the Eagles can control the clock and limit the amount of time the Falcons’ offense is on the field, they’re going to win this game. They’re a better home team than away team as we’ve seen this year. I think we’ll see a different Eagles team this weekend – the team that beat the Steelers and Vikings handily.

Eagles beat the Falcons next week

Plus, I’ll owe Anthony DiBona a cheesesteak if the Falcons win. Go Birds.