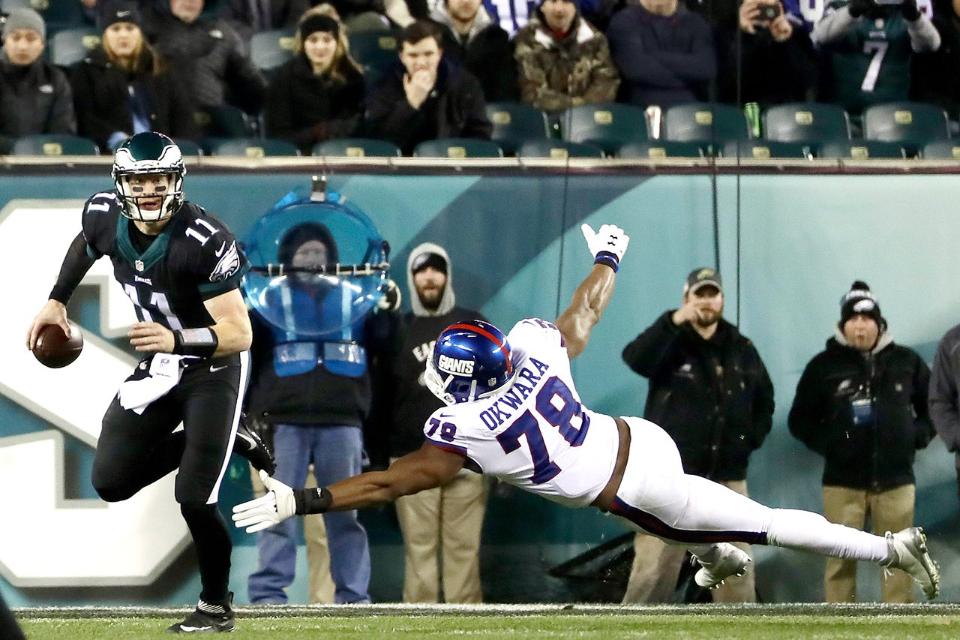 What a bitter sweet victory.

When Terrence Brooks intercepted Eli Manning’s pass with 14 seconds left, not only did he seal a 24-19 Philadelphia Eagles victory over the New York Giants, he also locked up the NFC East for the Dallas Cowboys.

Nonetheless, it was nice to finally get a win in a tight game. The Eagles had been 0-6 in games decided by a touchdown or less coming into the game. The triumph for the snapped a five-game losing streak and improved Philadelphia’s record to 6-9.

The controversy coming out will certainly be head coach Doug Pederson’s decision to throw the ball on 3rd-and-5 with 1:42 left and the Giants only having one timeout at their disposal. Running the football in that situation would’ve made them use their final one, but I don’t hate the decision as much as everybody else, I just hate the play call.

If you watch the play again, it appears as if Nelson Agholor might’ve been the first option. He ran a slant route, but was blanketed by Dominique Rodgers-Cromartie. Jordan Matthews ran a wheel route from the slot and that’s where the ball went before it got knocked away by Trevin Wade. On the right side, Dorial Green-Beckham ran a stop route, but Wentz never looked that way.

Here’s my gripe. That was a very low percentage throw for Wentz to make to Matthews, especially on a 3rd-and-5. I would’ve called a play that didn’t have any options going deep. Darren Sproles also stayed in to block on the play, which is ridiculous. He needs to be running some sort of option route coming out of the backfield. Zach Ertz wasn’t in the game at the time, he needs to be out there running a stop route or a Y-Stick. I would’ve had somebody crossing over the middle of the field. Pederson didn’t have the right personnel or the proper play call in that situation.

Carson Wentz was 13-of-24 for 152 yards with a touchdown and interception to go with four scrambles for 27 yards. His elusiveness and ability to escape the pocket was mesmerizing. It’s something I’ve really noticed from him the past few weeks. During the first half of the season and especially when he began to run into his rough patch, Wentz was perceiving pressure that wasn’t there and escaped the pocket when he didn’t have to.

That’s not the case anymore.

Wentz's ability to sense the pressure and escape the pocket tonight was jawdropping, just has to be careful when throwing the ball downfield pic.twitter.com/cZcHoUycFt

Wentz also tossed a beautiful 40-yard touchdown pass to Nelson Agholor and yes, he actually looked it in the entire way and caught the damn thing.

40-yard TD from Wentz to Agholor. Agholor made sure to look that one all the way in. Nice throw from Wentz. @AdrianFedkiw pic.twitter.com/6r5JMuNnwz

Lane Johnson’s return to the lineup paid immediate dividends on the Eagles’ opening drive. He led the way on the first play to spring Ryan Mathews free for 17 yards along the right boundary and then he pulled and sealed along the right edge on Darren Sproles’ 26-yard touchdown to cap it. Zach Ertz had a nice block on the score as well. Having Johnson back gives the Eagles more versatility in the running game because Philly had been running predominantly to the left side off of Jason Peters.

Lane Johnson showed how much of a difference he makes along the OL on that first drive @AdrianFedkiw pic.twitter.com/boJFOGGFUr

The game ball goes to Malcolm Jenkins, who had two interceptions, including a pick-six, and showcased some great ball skills. Remember last season when he would drop these type of balls thrown his way?

Chase Daniel came into the game for a cup of coffee after Wentz was woozy following this roughing the passer penalty.

Roughing the quarterback penalty moves the chains on a 3rd-and-13, but knocks Wentz out of the game @AdrianFedkiw pic.twitter.com/NtAD1G0tK7

Daniel made the most out of his opportunity, side-stepping Johnathan Hankins in the backfield before flipping a 16-yard completion to Ryan Mathews to set the Eagles up with a 1st-and-goal.

Daniel sidesteps Hankins in the backfield and flipped it forward to Mathews for a gain of 16 @AdrianFedkiw pic.twitter.com/tjnmL762NK

Eli Manning finished 38-of-63 for 356 yards with a touchdown and three interceptions for New York, which will have to wait to clinch a playoff berth. Odell Beckham racked up 150 yards receiving on 11 receptions.

Just 1:28 after Sproles’ score, Malcolm Jenkins returned a Manning interception back 34 yards for a touchdown to make it 14-0. Jenkins had a great opening drive where he helped close on Odell Beckham quickly to help out Nolan Carroll, then blanketed Beckham a snap later from the slot.

Jenkins nice close on 2nd down to help out Carroll on Beckham on 2nd down, then slides down to blanket Beckham from the slot @AdrianFedkiw pic.twitter.com/0nsR8Iyo9y

On the pick-six, Brandon Graham and Vinny Curry collapsed the pocket and forced Manning to step up into it. Jenkins made the easy play on the ball before taking it all the way back.

Graham and Curry collapse the pocket, Eli forced to move up and Jenkins with the pick 6! @AdrianFedkiw pic.twitter.com/jBZwBZJmEY

Robbie Gould booted through a 35-yard field goal late in the first and added another one midway through the second to get the Giants within six, but the Eagles found the end zone again on Wentz’s 40-yard hookup to Agholor and extend the margin to 21-6.

Manning flipped a 13-yard score to rookie Sterling Shepard to cap a 12-play, 84-yard march right before the half.

Gould split the uprights from 29 yards out on the Giants’ first series of the third quarter and the G-Men stuffed the Birds on a 4th-and-goal from the 1-yard line on the Eagles’ ensuing drive.

Eagles go for it on 4th-and-goal, run it up middle and get stuffed. Didn't have problem with going for it or play call, just didn't work pic.twitter.com/OFIc1v24HU

Both teams exchanged field goals during the middle stages of the final frame for a 24-19 Eagles advantage.

The Giants turned the ball over on downs with 2:00 remaining when Manning’s pass intended for Sterling Shepard was broken up by Nolan Carroll, who might’ve gotten away with a pass interference on the play. It was a crazy sequence of events. The officials initially ruled that Beckham picked up a first down on his 3rd-and-3 crossing route where he extended the ball near the line-to-gain. After a Philadelphia challenge, however, the call was overturned and to make matters worse, the Giants were then whistled for a false start.

Crazy turn of events. Doug wins the challenge to take away 1st, a FS moves a 4th-and-1 to 4th-and-6 and pass for Shepard on 4th incomplete pic.twitter.com/z0pVkFCikG